Watch this Marine veteran chase and catch an alleged rapist 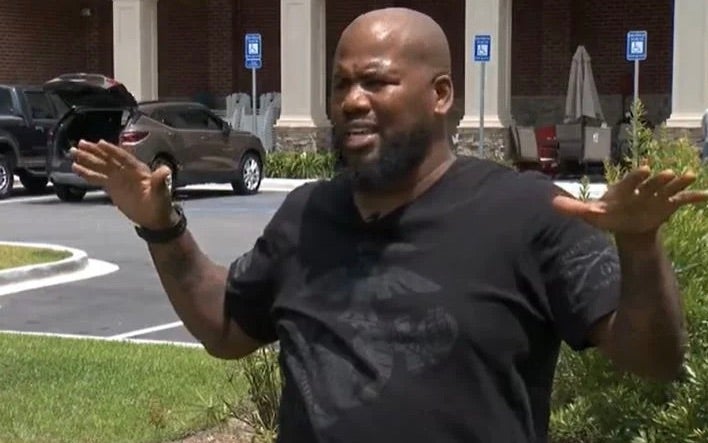 On April 27, 2021 a Marine veteran heard a woman screaming from the bathroom of the store he was shopping in. After hearing the fleeing suspect had raped her, he jumped into action.

Damian Austin was shopping at Kroger’s grocery store in Savannah, Georgia when he apparently heard a woman screaming. He told Savannah’s WSAV “It made the hairs stand up on the back of my neck because it wasn’t a normal yell.” After a customer behind him said that the now fleeing man had raped a woman, he didn’t hesitate. Austin immediately gave chase to the suspect.

The chase led him through the Kroger’s parking lot and into a grassy area near an Ace Hardware store. It was there that Austin pulled out his gun, which he had a concealed permit for, and ordered the man to stop and surrender. Security footage from a nearby store caught it all.

Another customer assisted Austin by purchasing a package of zip ties to secure the suspect until police arrived. Later identified as Gregory Hathorn, the suspect was charged with felony kidnapping, felony rape, and misdemeanor battery against the woman.

The Chatham County Police Department Chief Jeff Hadley told Savannah WSAV  “I just can’t commend them enough for involving themselves in a dangerous situation obviously, so this person could be held accountable and we could make an arrest and there wasn’t any further danger to the community.”

He told KFOR “I hope this doesn’t dictate her life from this point on. There are people who still care and they’ll act in time of need.”

Savannah KTSM 9 News reported that the neighborhood residents are calling the Marine Corps veteran a hero for his actions. The manager of the Ace Hardware presented Austin with a gift card as a thank you but the veteran didn’t want accolades. He told KTSM 9 News that he’s just grateful he could do something and help make his community a little safer.