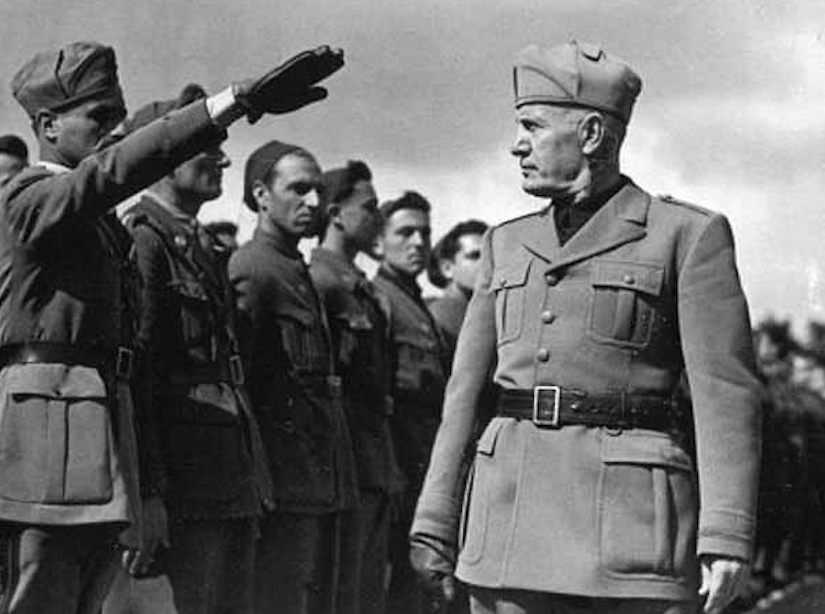 When Italy entered World War II on the Axis side, things were looking pretty good from where fascist dictator Benito Mussolini sat. He had an army of some 200,000 men, he controlled Libya, Mediterranean Islands and much of East Africa. He was in an alliance with two of the world’s great powers of the day. His eyes were set on conquering a Mediterranian empire that stretched from “the Strait of Gibraltar to the Strait of Hormuz.”

That, of course, isn’t how it turned out. In fact, Mussolini never even came close. Italy failed to achieve much of what it tried to do and the great victories by Italian troops often came under the direction of German leadership, victories which history tends to give to the Germans. Fascist Italy probably should have fared better, but didn’t. Here’s why:

1. Italy was not prepared for war

Before the war started, Italian officials estimated that production of wartime needs could not possibly make the Italian army ready for war until 1942. When Nazi Germany and Fascist Italy first signed their friendship pact in 1939, it stipulated that neither side should go to war before 1943 for this reason.

We all know what a pact with Hitler was worth. When the fighting actually got going, Italy’s industrial output was a fraction of what France, Germany and Britain were already producing. Despite Italy’s great power status, the real infrastructure and capabilities of the country did not match its public image.

2. Their weapons were outdated

Even though Italy had its share of colonial ambitions and conquests, much of its military was still using old weapons and gear from World War I. The air force was flying biplanes, the navy had no aircraft carriers, the army had very old tanks, and radios were almost nonexistent.

Italy did create a powerful homegrown tank concept early on in the war, before the United States entered World War II. But its prototype wasn’t finished until 1942 and it never reached production. Even if they’d had the equipment and weapons (they didn’t) they would never have been able to mass-produce them (see #1).

3. Italy lost one of its greatest military leaders early on

It was Benito Mussolini who became the fascist leader of Italy. It probably should have been his deputy, Italo Balbo, but it wasn’t and Italy was worse off for it. Balbo was everything Mussolini was not. Mussolini deserted during his military service but later served two years as penance. Balbo joined the army as an officer during World War I, and became one of the country’s vaunted alpine troops and served courageously on the front line.

After the war, and when the fascists came to power, it became Balbo’s responsibility to build the Italian Air Force in the 1920s and 1930s. He taught himself to fly and in five years was Italy’s Marshal of the Air Force and a world-class pilot. His military skill in Africa was unmatched among fascist leaders and he was ready to take the war into Egypt against the British Empire. But he was shot down and killed by his own troops in Libya.

His replacement, Rodolfo Graziani is better known for his repressive policies and crimes against humanity than he was for any battlefield skill. Graziani was so bad that he was only allowed to remain a general because he was personally loyal to Mussolini.

4. Mussolini’s eyes were bigger than his stomach

Mussolini knew all of these facts. He knew Italy wasn’t prepared for war with the great powers in any way. Overwhelming Ethiopians was one thing, but large-scale mechanized warfare on three continents was another thing altogether. Italy only entered the war after the Fall of France in 1940, believing the war would soon be over with minimal effort on the Italians’ part.

Because of his belief that the war would be over relatively quickly, Mussolini felt confident in invading France and demanding concessions without actually planning and implementing a consistent strategy for defending or advancing Italian interests. When he did mobilize Italian troops in Greece, for example, he soon found his army overwhelmed.

This is not the fault of the Italian troops themselves, but rather a fault of the poor planning of Italian leadership. With 200,000 men at arms under his command, Mussolini could boast one of the world’s largest armies. In truth the men were mostly foot soldiers, carrying small arms. They would also have to walk wherever they were going because Italy couldn’t produce the transports needed to drive them.

There just wasn’t enough money budgeted toward training the men in World War II’s way of war. They eventually fielded some great mechanized anti-tank and anti-aircraft weapons, but the men expected to operate those weapons just weren’t trained the way troops in the German Wehrmacht or U.S. Army were. Italians were trained at the front lines and their performance suffered as a result.

6. Italian forces were often far from their supply lines

It’s true Italy couldn’t produce enough materials to sustain its army effectively, but even if they could, there was no great way of getting supplies to the fight. For fighting in North and East Africa, Italian supplies had to be ferried across the Mediterranean, which was full of the British Royal Navy just looking for something they could send to the bottom of the sea.

When German Gen. Erwin Rommel took command of the Afrika Korps, most of his troops were Italians, and his performance was a testament to what Italian troops could do when properly led and fed, but even Rommel was subject to supply line failure, which was the principal reason for the Axis defeat in North Africa.