This War Bride's advice? 'Be courageous.' - We Are The Mighty

This War Bride’s advice? ‘Be courageous.’ 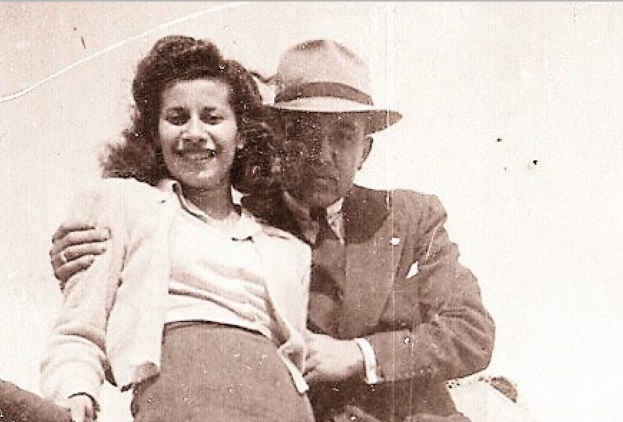 I was born in Bari, Italy. Times were slow during the depression, and I had a very complicated life. When I was a little girl, my dad was in the army, and he was sent to Ethiopia. In 1935, he brought the whole family over there, so I lived in Ethiopia for about five years, and I returned to Bari right in the middle of World War II.

Before the war, I loved to read a lot. I used to love going to school. But my father was a prisoner of war for six years, and while we were in Ethiopia, we lost everything. We were in a concentration camp. And by the time we got back to Italy, it was 1943, and things were very different from when we left.

The war had changed everything in Bari. I remember running because of all the bombings. Until the British and American armies came to Italy to set us free, things were very hard.

I met my husband in a very exceptional way. My husband was of Italian descent, and he had gone to America when he was a young boy, but he still had family in Italy.

He contracted a disease while serving America in the Pacific War, and he had to go back to the veterans hospital in America. While there, his mother, who was in Italy, became very sick. It took him 20 days by boat, but by the time he reached his family, his mother had already passed away. He stayed in Italy with his family for a few months.

During this time, I had found a job with the American army in a rank called the USO Shows, which brought in celebrities to perform for the troops. There was an office in Bari, and they needed a typist. I was only 17 years old, and I did not speak English, but I could read it. They convinced me I did not have to speak to anyone, just type. So I copied the words.

My husband passed our door and saw me, and he said he wanted to see more of me. He waited until the end of the day, and then he called me. He called after me in Italian, and I said “Yes, what can I do for you?” He asked me how to get to the station, explaining he was new in town. I tried to explain, but decided to walk him there. And that’s how we met.

As we started talking, we found out we had quite a few things in common. He was born in the same town as my father, and he knew some family there. Actually, my father’s cousin was my husband’s doctor!

That day we met, we felt a special attraction for each other. When we fell in love, it was as simple as that. He had to go back to the Veterans Affairs hospital in America, so we planned to get married after he returned to Italy. But he ended up staying in the hospital for almost a year. By that time, his finances were low, and he told me he did not think he could return to Italy. But he told me there was a way I could come to America as one of the war brides, and we could get married in America.

It took a lot of thinking on my part. But you know, I thought it was meant to be, so I said, “Okay, I’ll try.” My parents were not pleased about it, but I wanted to marry him. They put up a good fight because we did not know anyone in America. How could they let their 19-year-old daughter go alone to a strange country? I had to do a lot of convincing, but I was in love with him and he was in love with me.

I arrived in New York Harbor in 1947. I had seen lots of movies where the city was portrayed as such a prominent and beautiful place to live. I had no idea what skyscrapers looked like in real life, but when I saw them, it was really extraordinary. Everyone was so friendly and kind when I arrived. I felt very much at home. My husband opened a grocery store soon after, and he put me behind the counter. That’s when I realized that I had to learn English. We had all kinds of people come through the door: Black, white, young, old, Italian — every nation! I didn’t know how to speak English, and they all helped me. We all got along beautifully.

I remember someone told me about an area called Little Italy, where they had bookstores filled with books that would teach me languages. I read them every day and I made a point of practicing my English, even though I made a lot of mistakes at first. I sometimes made very stupid mistakes! Some people laughed at me, but I laughed with them. I asked them to correct me when I made mistakes, because that’s the way I learned.

After a couple of years of only speaking English with my husband, I knew how to speak well. I loved the language. English is beautiful. I remember reading Joseph Conrad. I found some of the phrases he used so attractive. Once I started reading in English, I felt like part of the environment. I was not a stranger any longer. The sooner you learn the language, the more you feel at home. I wanted to assimilate into the American lifestyle.

One of the biggest differences that struck me was that in Italy, if there was ever something special happening, you would get a mob arriving. Everyone would fight to get to the front of the line, whereas Americans used to line up for hours — there was no pushing, no shoving, no nothing.

The one thing I miss about Bari is the food, because everything is very organic. They still do things the old way, and you can’t replicate that in America. And the wines that they grow in the Bari regions, where the fruits are picked straight from the tree — you can’t make them here.

I went back to Bari almost 10 years ago with my daughter for the first time. I couldn’t go back sooner because of the business, the children, and my husband being in and out of the hospital.

It was very emotional because it did not look the way I remembered. It was all completely different, but the food and the restaurants have stayed the same. But it felt so normal to be there. You never lose your birthright, and I was so happy to see my cousins.

I didn’t teach my children Italian, and that was one mistake I made. I wanted to learn how to speak English, so I never spoke Italian to them. I brought my whole family to America, though. My mother raised my oldest son, and only spoke Italian to him, so when he went to kindergarten he couldn’t speak English! The nuns called me and said, “You cannot leave this boy here. He’s crying all the time. He doesn’t understand us.” So he stayed at home, and I had to teach him English.

For people considering moving to a different country or culture, I would say to be courageous, because you never know what you’re going to encounter. If they are fortunate like me, they will find a beautiful place to call home. My husband was a good provider. I had no problems. We just had to work hard. You’ll have to assimilate with the people wherever you’re going. If you want to keep your ways, then you’re always going to feel like a stranger.