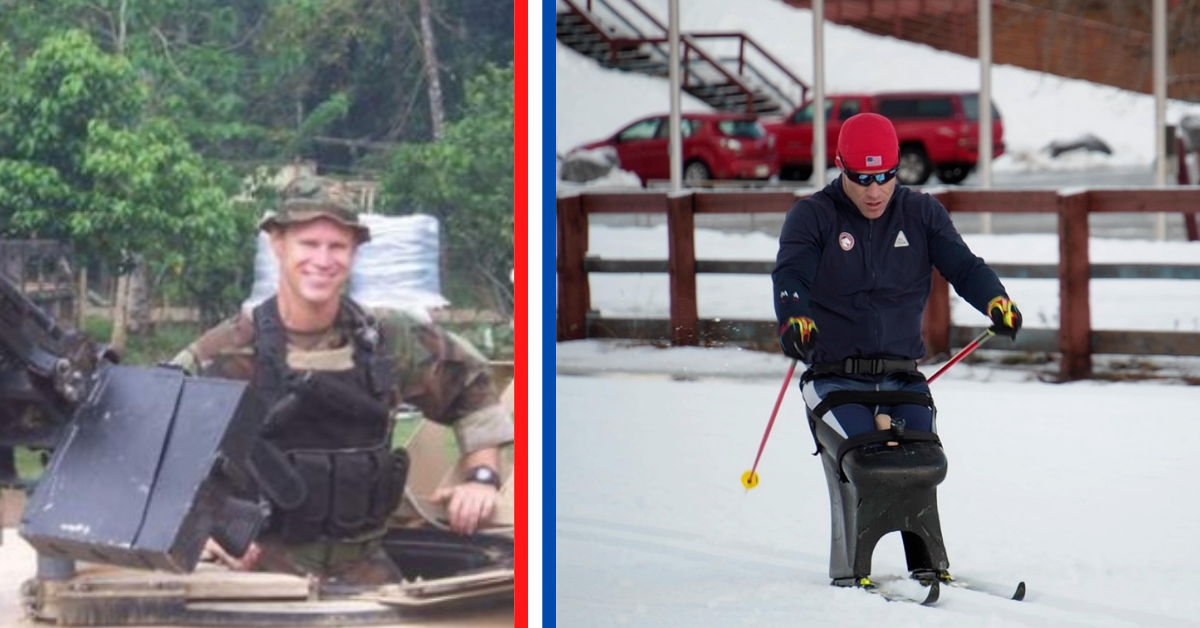 A multitude of studies have demonstrated the positive impact youth mentoring can have and there is no one better to do it than a bad-ass SEAL turned Paralympian.

Retired Navy SEAL Lt. Commander Daniel Cnossen didn’t initially set out to take over the 2018 Paralympics by winning one Gold, four Silver and one Bronze medal. Nor did he imagine he’d walk away named the Best Male Athlete of the Games. But like all of the challenges he’d faced throughout his life, Cnossen was all in.

Before he was an elite Navy SEAL – you could find him working on his fifth-generation Kansas farm. Though his own father was a Vietnam War Marine Corps Veteran, Cnossen didn’t hear much about it growing up. “My dad didn’t talk about it a lot so I definitely wasn’t pressured to go into the military. It just felt like a calling for me,” he shared.

Cnossen applied to and was accepted into the Naval Academy in 1999. As a Midshipman he said he finally felt like he’d found where he was supposed to be. After the first year, making it to BUD/s and becoming a SEAL was the ultimate goal. There was only one problem.

He was afraid of the water.

“I had to get into the water and start working on my swimming,” Cnossen admitted. The work paid off – he was offered one of the 16 spots for SEAL training and graduated from BUD/s in 2003.

Assigned to Team One, he worked his way through earning the respect of his seasoned teammates. After deploying to Iraq and Afghanistan numerous times, Cnossen became the officer-in-charge of an 18-man SEAL platoon in 2008. “I tried to just be humble, quiet and ask a lot of questions,” he said.

A combat deployment to Afghanistan would change everything.

“It was a very physical operation we had inserted in offset from the target via helicopters. We were foot-patrolling and I was part of a small element that was assigned to get to the top of a large hill that overlooked the target compound down below that was going to be assaulted by the other members of the element,” Cnossen shared.

During the hike to the top he stepped on an IED.

“Fortunately none of my teammates were injured and that was critical. We had a Medic with us and he applied six tourniquets to try to staunch the blood flow. It was painful but I was in shock at the time, just trying to stay awake. They had to drag me off the mountain,” he said. “My teammates put their lives on the line and I owe them for being alive today.”

The bomb took both of his legs.

When Cnossen woke up from a 10-day induced medical coma, he discovered how perilously close he had been to losing his life. “They got me to the helicopter within one minute of having to depart due to the bingo fuel mark,” he explained. He spent two years fighting for his life, undergoing over 40 surgeries and endless therapies.

He fondly remembers a physical therapist at Walter Reed who inspired him to work even harder than he thought he could. “He himself happened to be an ultramarathon runner. I love mountaineering and running more than anything else that I could be doing in my spare time in my 20s, I got injured at age 29. I really wanted to run on prosthetic legs,” Cnossen said. “This was going to be a challenge as a double amputee above the knee. But he was like, ‘we’re going to figure this out’.”

It was during this time he was introduced to the Paralympics and despite his severe injuries, Cnossen refused to allow it to prevent him from purposeful living. “Ultimately, I fell back on what I love, which is to be part of a team representing the country,” he explained. “You’re pushing yourself, maybe even to the limit. For me, this has been an awesome thing after the injury and leaving the SEAL teams.”

Leaving the military behind wasn’t easy and it’s something Cnossen said he misses every day. “I think it’s  a good thing for anybody exiting or transferring out of the military to think about how you can foster a sense of community that will help transitioning civilian life can be a little bit different,” he said. “Sometimes, we’re just looking for a sense of purpose. Once you have a sense of purpose in a unit, that camaraderie, then you’re ignited.”

For him, it was competing in the Paralympics and volunteering his time with Classroom Champions. It’s an organization he remains passionate about. “I’ve been able to give a little bit of some of the lessons I’ve learned as an athlete and certainly in the military back to kids that are in classrooms,” Cnossen shared.

According to its website, Classroom Champions empowers children to thrive socially, emotionally and academically through the mentorship and mindset of world-class athletes to improve engagement, build growth mindsets and inspire positive classroom culture.  Recently, Cnossen was honored with the P&G Athlete for Good Fund Grant which will go directly to making a difference in the lives of youth through Classroom Champions.

Cnossen looks forward to his time volunteering with the youth-mentoring organization, he said. It’s where you’ll find him in between getting ready to compete in the 2022 Paralympics, hosted in Beijing from March 3-13, 2022.

As for his mentality and words of advice in pushing through barriers or struggles, he reflected back to “Hell Week” during BUD/s. “One day at a time. Don’t think too much about tomorrow, just let’s just get through today and maybe get to the next hour or get to the next minute,” Cnossen shared. “Focus on what you can control and have a kind of acceptance of things you can’t.”

So, what would readers be surprised to learn about him? Despite his initial fears of the water and life-changing injuries, he’s become an avid surfer. “For me, surfing is something that really has helped me mentally get get through and beyond my injury, not letting it define me. The hardest thing is just to get in the water,” Cnossen said. “Once I’m in the water, I don’t want to come out.”