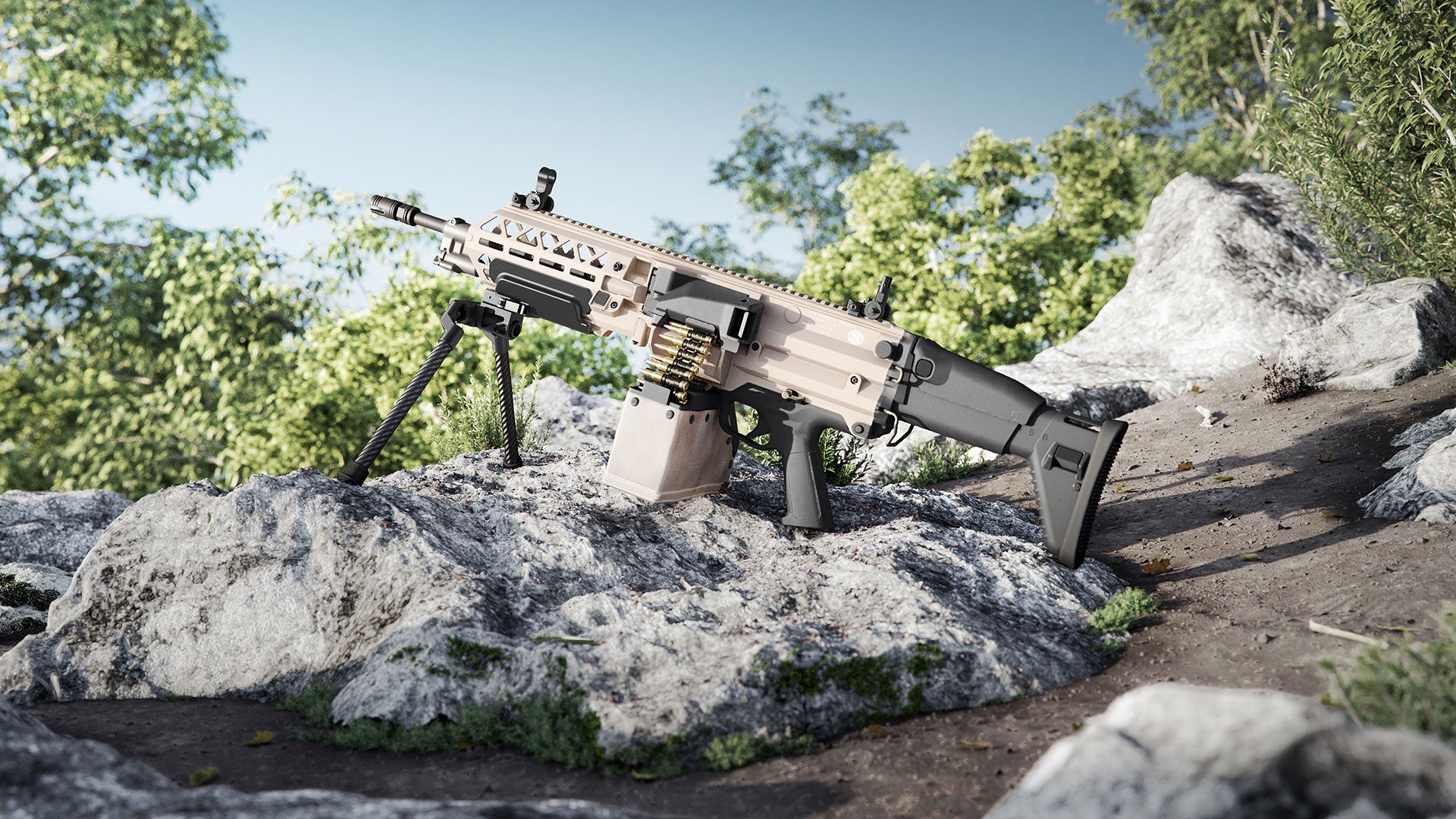 The Belgian company FN Herstal is a heavyweight manufacturer in the firearms industry. They’ve made machine guns like the FN Minimi and MAG, better known as the M249 SAW and M240 machine guns respectively. They’ve also manufactured the standard-issue M4 Carbine and the Special Operations Forces Carbine Assault Rifle, better known as the SCAR. On May 6, 2021, FN held a press conference they called “A New Chapter Begins.”

At the pre-recorded online press conference, FN unveiled the brand new FN EVOLYS Ultralight Machine Gun. The standard machine gun features are present: gas operated, open bolt, short stroke piston design. What makes the EVOLYS unique is its extreme light weight. FN claims that it fires like a machine gun, but handles like an assault rifle thanks to its light weight and ergonomics. It was even shown with a carbon fiber bipod.

FN highlighted the use of Polymers and Additive Manufacturing, better known as 3D printing, as a major contributor to the light weight of the EVOLYS. One interview shown during the press conference was conducted in front of a 3D printing machine.

FN claims that all actions can be completed with just one hand, including engaging the belt. This action can also be done with either the left or right hand. Additionally, cartridges are automatically repositioned if the belt is not placed correctly on the feed tray when the feed tray cover is closed, preventing first round failure to feed. When the last round in the belt is fired, the last link is ejected, making clearing faster for the next reload.

Those familiar with FN products will also recognize the stock on the EVOLYS. Known in gun circles as the “Tactical UGG Boot” for obvious reasons, the stock appears to be taken directly off of the FN SCAR. The stock folds to the right side of the gun, extends and retracts, and features an adjustable cheek riser. “Whatever his size, or the equipment he is wearing, the user can always find a comfortable shooting position,” FN said.

The press conference showed plenty of firing demonstrations too. Despite the weapon’s light weight, recoil appeared to be very mild. This is due in large part to the EVOLYS’ hydraulic buffer. Demonstrations included shooting the EVOLYS standing, kneeling, prone, and on the move. The gun’s light weight will be a welcome feature to any machine gunner who has to carry it on patrol and make bounding movements with it.

The EVOLYS appears to do a good job of directing its gasses away from the shooter. This prevents noxious fumes and toxins from affecting the shooter. The EVOLYS is also designed to work suppressed.

Although the U.S. Army is moving to the 6.8mm caliber with the Next Generation Squad Weapon system, FN has plenty of potential NATO customers who look to be keeping 5.56x45mm NATO and 7.62x51mm NATO weapons in their armories for the foreseeable future.