Four Vietnam Veterans were awarded the Medal of Honor 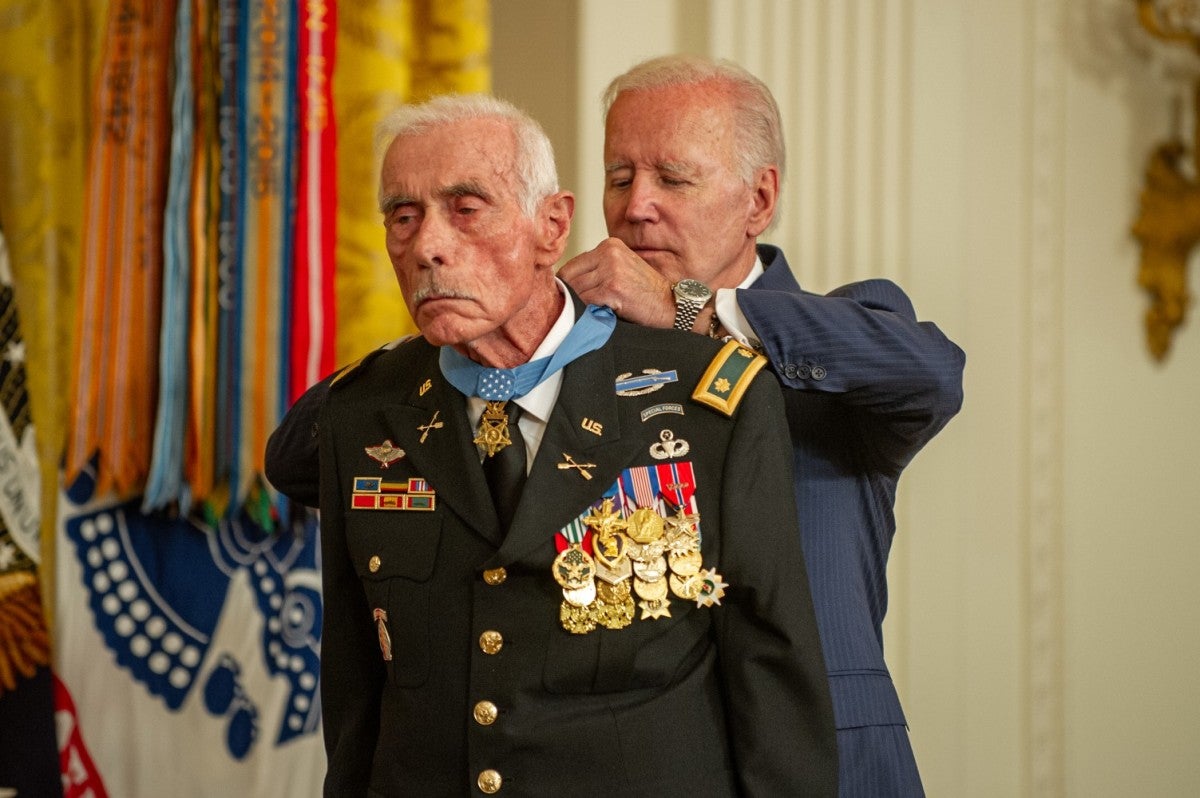 The Medal of Honor is the highest and most prestigious military award that the United States can bestow on a service member. Sometimes, heroic actions performed on the battlefield are recognized with other awards and later upgraded to the Medal of Honor. This was the case for four soldiers who risked their lives for their comrades in Vietnam.

On July 5, 2022, during a White House ceremony, President Joe Biden awarded the Medal of Honor to Spc. 5 Dennis Fujii, Spc. 5 Dwight Birdwell, Maj. John Duffy and Staff Sgt. Edward Kaneshiro who was awarded the medal posthumously. “It’s been a long journey to this day for those heroes and their families,” Biden said during the ceremony. “And more than 50 years have passed since those soldiers have proved their mettle. But time has not diminished their astonishing bravery, their selflessness…or the gratitude that we as a nation owe them.”

Staff Sgt. Kaneshiro served in Vietnam with Troop C, 1st Squadron, 9th Cavalry, 1st Cavalry Division. On December 1, 1966, in the Kim Son Valley, Kaneshiro’s platoon was engaged by a numerically superior North Vietnamese force. Moreover, the enemy was supported by a fully bunkered and concealed trench system. The initial ambush killed the platoon leader and the point man, and wounded four others. As a squad leader, Kaneshiro ordered his men into cover and maneuvered to engage the enemy alone.

Crawling forward, he knocked out one bunker with an expertly thrown grenade. Kaneshiro pressed his attack and jumped into an enemy trench. Over a distance of about 35 meters, he worked the ditch alone, destroying one enemy group with rifle fire and two others with grenades. His actions alleviated the suppressive fire that pinned down his unit and allowed them to reconsolidate and prepare the dead and wounded for exfiltration. Kaneshiro continued to serve in the Army until March 6, 1967 when he was killed by enemy gunfire. He was survived by his widow, Mitsuko, and five children. Mitsuko passed away on April 10, 2022, at age 90. Kaneshiro’s son, John, accepted the Medal of Honor on his behalf.

Spc. 5 Birdwell was awarded the Medal of Honor for actions during the Tet Offensive. On January 31, 1968, he was assigned to C Troop, 3rd Squadron, 4th Cavalry, 25th Infantry Division. Birdwell and his troop were sent to Tan Son Nhut Airbase to help repel an enemy attack. Approaching the base, the troop’s column of tanks and armored personnel carriers was ambushed by three enemy battalions. The lead tank was struck by an RPG, trapping the armored column. During the attack, Birdwell’s tank commander was wounded. Birdwell rendered aid and, under heavy enemy fire, lowered his tank commander to the ground and moved him to safety.

With complete disregard for his own safety, Birdwell took command of the tank. Standing in the commander’s hatch, exposing himself to enemy fire, he directed the tank’s 90mm main gun and used a .50 caliber machine gun to engage the enemy. When the 90mm ammunition was depleted and the machine gun overheated, Birdwell continued to fight from the tank with his M16 rifle, sometimes exposing himself entirely to gain a better shooting position.

When an American helicopter crashed nearby, Birdwell braved the heavy enemy fire and ran to the crash site. From the helicopter, he retrieved two M60 machine guns and ammunition belts. After handing one M60 off to another soldier, Birdwell remounted his tank and continued to engage the enemy with his machine gun. Despite being wounded in the face, neck, chest and arms, Birdwell refused to be medically evacuated. Instead, he dismounted his tank and rallied his comrades to established a defensive position at the front of the armored column. As the enemy’s attack withered, Birdwell gathered ammunition from disabled vehicles and helped move the wounded to safety. Birdwell’s Medal of Honor citation notes that, “His leadership and tenacity under fire inspired the other C Troop soldiers to continue fighting against the superior enemy force, and directly contributed to the enemy’s ultimate defeat.”

Spc. 5 Fujii served in Vietnam with the 237th Medical Detachment, 61st Medical Battalion, 67th Medical Group. On February 18, 1971, Fujii was a helicopter crew chief on a medical evacuation mission to rescue wounded South Vietnamese troops from a battle. Heavy enemy fire deterred the helicopter’s first landing attempt and brought it down during the second. Fujii was injured in the crash. Soon after, a second helicopter managed to land nearby and rescued all of the downed crewmen except for Fujii. Intense enemy fire prevented him from boarding the second helicopter. Rather than risk the lives of his comrades, he waved for the helicopter to take off and leave him behind.

Fujii was the only American on the battlefield. Subsequent rescue attempts were made, but prevented by enemy antiaircraft fire. Fujii managed to secure a radio and declared the landing zone to be too hot for further evacuation attempts. Despite his own wounds, Fujii spent the night and next day treating his wounded allies. On the night of February 19, the allied position was attacked by a reinforced enemy regiment supported by heavy artillery fire. Using the radio, Fujii called in American helicopter gunship support to hold off the attack. For over 17 consecutive hours, Fujii repeatedly left his entrenchment, exposing himself to enemy fire, in order to better direct the gunships. At times, the fighting became so vicious that Fujii had to interrupt his radio transmissions to engage the enemy with rifle fire at close range.

Despite his wounds and severe fatigue, Fujii ensured the survival of his allies until February 20 when an American helicopter was finally able to evacuate him. However, during the exfiltration, the helicopter was hit numerous times and forced to crash land at a South Vietnamese Ranger base just four kilometers away. It would be another two days before Fujii was evacuated to Phau Bai for medical assistance on February 22.

Maj. Duffy was awarded the Medal of Honor for actions on April 14 and 15, 1972. During this time, he was part of Military Assistance Command Vietnam Team 162, 5th Special Forces and served as the Senior Advisor to the 11th Airborne Battalion, 2d Brigade, Airborne Division, Army of the Republic of Vietnam. Over the prior two days, the 11th Airborne Battalion commander was killed, the battalion command post was destroyed, and Duffy was wounded twice. However, he refused to be evacuated.

On April 14, Duffy directed the defense of Fire Support Base Charlie when it was surrounded by a battalion-sized enemy force. That morning, after a failed effort to establish a landing zone for helicopter resupply, Duffy moved close to enemy antiaircraft positions to call in an airstrike. During this time, he was wounded by fragmentation from a recoilless rifle but again refused to be evacuated. The enemy responded with an artillery barrage of the base. Duffy, exposing himself to the bombardment, directed gunships onto the enemy positions which eventually silenced the enemy fire. After this, he assessed the base’s condition, personally ensured that allied soldiers were moved to safety, and redistributed ammunition amongst able-bodied defenders.

The enemy resumed their artillery barrage of the base with an estimated 300 additional rounds. Again, Duffy exposed himself in order to direct gunship support against the enemy. In the late afternoon, a ground assault began on all sides of the base. During the attack, Duffy moved between positions to direct fire, spot targets for artillery, and even direct gunship fire on a friendly position that was compromised. That evening, Duffy began to organize the evacuation of the base under the cover of night. He was the last man off the base, staying behind to adjust fire from the gunships until the last possible moment.

During the evacuation, the acting battalion commander was wounded and Duffy took command while continuing to direct available air support. On the morning of April 15, the battalion was ambushed. Duffy organized a defense and ensured the repulsion of the attack. After the ambush, he led the survivors, many of whom were wounded, to an established evacuation area; all the while being pursued by the enemy. Duffy marked a landing zone for the evacuation helicopters and directed gunship fire on enemy positions. Only once all of the evacuees were onboard did Duffy board a helicopter himself while also assisting an allied soldier in with him. He also rendered aid to a helicopter door gunner who was wounded during the evacuation.