'Hell Hath No Fury' like a WWII ambush. WATM's exclusive interview with director Jesse V. Johnson - We Are The Mighty 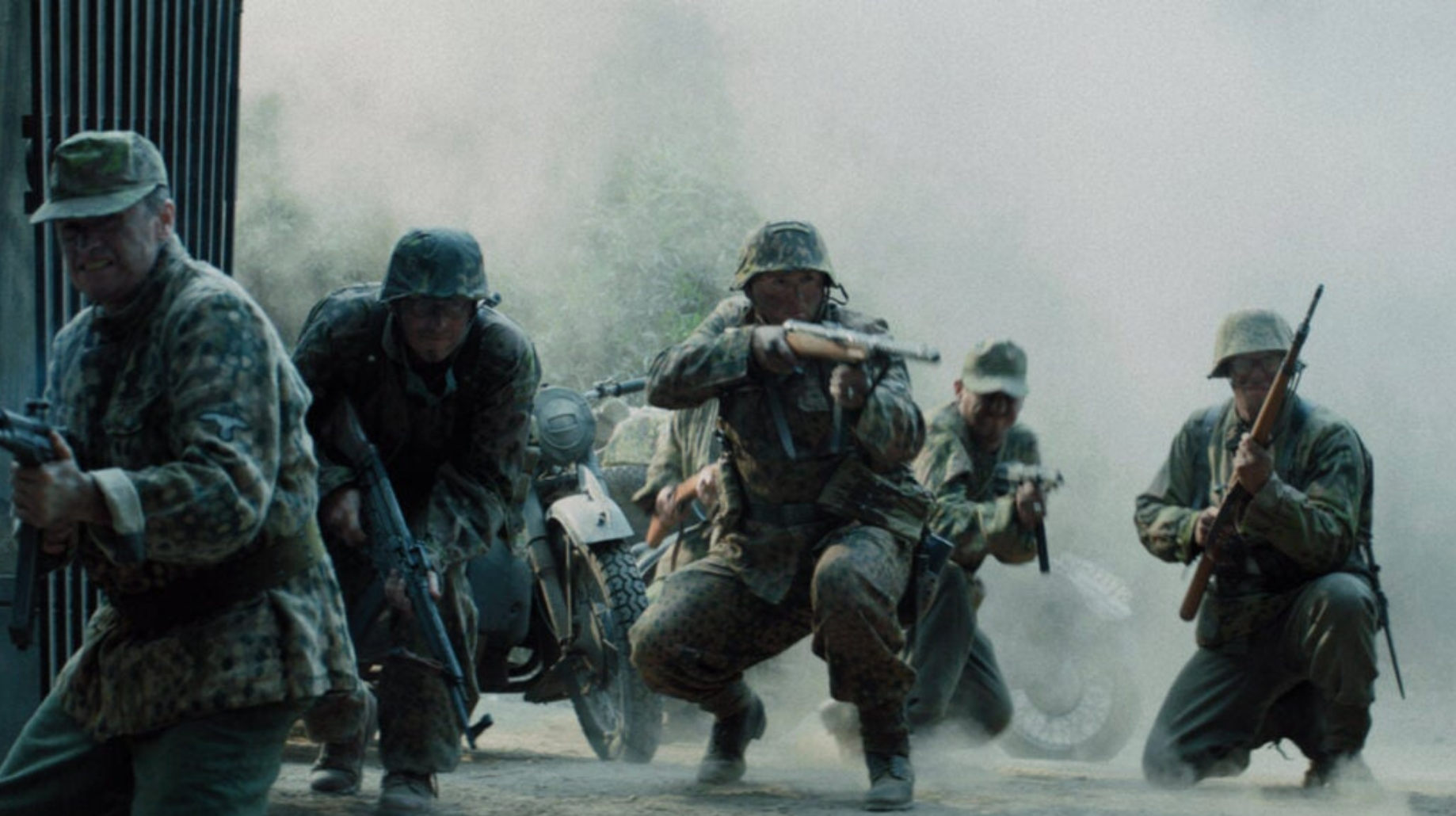 The bad guys, aka the Germans in World War II, coming to get Marie and the soldiers. Photo courtesy of Leif Helland.

Hell Hath No Fury comes at you like a freight train with action, mystery, intrigue and realistic portrayals of those who lived through World War II. Jesse V. Johnson’s direction is crisp, clean and focused which makes for an interesting adventure to go on with him in the driver’s seat. We find period-accurate uniforms, vehicles, weapons and tactics throughout the film that brings the audience into the reality of the characters. We even encounter French partisans ambushing some Nazis in the movie. Viva La Resistance!

Logline: Hell Hath No Fury is the story of one woman who single-handedly takes on the might of the German war machine, the French resistance, and a band of US infantrymen. Branded a traitor by her countrymen, French national Marie DuJardin (Nina Bergman) is rescued by American soldiers on one condition: to survive, she must lead them to a cache of gold—before the Nazis return to claim it for themselves.

Nina Bergman’s performance as Marie keeps us riveted as she enjoys her strategic tryst with our SS officer Mr. Bernhardt, known as Von Bruckner. Bergman keeps us focused on the screen as we watch her internal thoughts unfold throughout the project. We see a range of beautiful emotions on her face as she encounters love, betrayal, depression, surprise and life-threatening situations. Bernhardt brings a charm reminiscent of Connery’s Bond, which is saying a lot, but Bernhardt’s performance is eerily lethal, menacing, a bit creepy and likable all at the same time. His sadism is second to none. He would be a formidable foe for Indiana Jones if the opportunity ever arose. The German uniforms, equipment and weapons are impressive, showing a level of authenticity and detail not usually seen in indie World War II projects. Bernhardt’s costume further gives credence to his evil and relentless ways.

Four GIs show up with Marie at a graveyard where there is buried gold for the taking. The cemetery is guarded by two Frenchman played by Joseph Fathy as George and Dominquie Vandenberg as Clement who catches the GIs off-guard. The Frenchies have dug tunnels throughout the graveyard that are used for flanking enemies both American and German. Marie fails to remember where she hid the cursed gold in the cemetery and that upsets the GIs because they believe she is lying. She continues to weave her web even with the Americans as her survival is queen. The Frenchies aren’t exactly what they seem either, which will be saved for viewers only. Heh heh heh.

Cool cinematography shots are used in these tunnel sequences which capture the claustrophobic feel of escaping from certain death only to potentially find it just outside the exit of your tube to “safety.” The graveyard offers a litany of wonderful shoot-out sequences using tombs as defilades amongst the firing of Thompson submachine guns, a confiscated MP 44, the venerable M1911 .45 and a host of authentic German firearms. Concrete, bullets, explosives, dust, Nazis and even GIs fly around in the chaos with some soldiers on both sides dodging shells and certain death for as long as possible. There are reminiscent gunfight shots of Sam Peckinpaugh in here as well as Mr. Johnson knows his cinema and definitive shootout sequences to draw upon.

Overall, you will get a strong action and war film with heart and a unique story not seen for a while in the cinema. Where Eagles Dare and Kelly’s Heroes come to mind while witnessing the on-screen drama, if only Telly Savalas and/or Richard Burton were still alive to see it they would smile. After careful consideration with filming in light of the pandemic along with engaging performances and the ability to find such artifacts to represent World War II properly on-screen, Hell Hath No Fury gets a solid three out of four red star clusters and a robust recommendation to see the film. Come see a drama reminiscent of classic Hollywood storytelling with heroes, villains and evil Nazis getting exactly what they deserve.