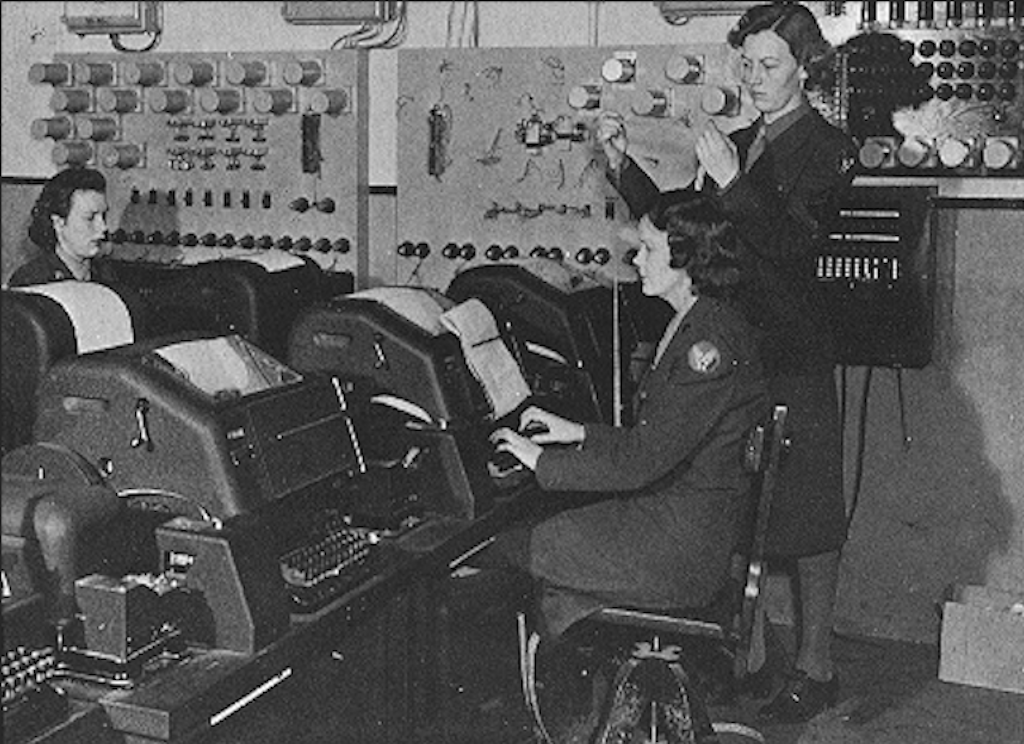 With the onset of World War II, the United States was experiencing many changes in the way it communicated. That meant new ways to communicate internally, and faster ways to get messages among different branches and ranks. From getting creative and flashing planes to bring in sensitive materials, to utilizing faster, new technology, like teletypewriters, this war saw new communication take hold.

Check out how soldiers relayed messages to their fellow soldiers, as well as back home, during WWII.

Airplanes served as an important form of communication among troops, as they delivered letters and packages, as well as important military communications. Certain messages that could not be taken through enemy territories would be flown to their destination.

Meanwhile, radio was used for planes to speak with those on the ground. Radio was also a way to share real-time words among all branches and ranks. However, it had to be done so quickly, to avoid a message being intercepted or decoded.

Telephones had become more sophisticated since the first World War and served as a form of instantaneous communication between soldiers. Most commonly, high-ranking officials used phones to talk with a boss or to send down direct orders.

Then there were telegraphs, a long-distance message transmission system that uses visual or sound signals, such as Morse code. During WWI, telegraphs were widely used but required a person to listen and translate. With the newly released teletypewriters, messages could be sent directly to a printer. This sped up the process and reduced the amount of staff needed to send and receive messages. Soldiers could read messages live as they were being typed. With the help of teletypewriters, messages could be sent back and forth, with little lag time, despite long distances.

Finally — from straight out of left field — comes the use of animals to deliver letters. Dogs and pigeons were trained to carry and deliver mail for incognito letter transmission. That is, at least until the practice was discovered; animals still delivered messages, but in safer territories.

Communicating with the general public

When reaching folks on the homefront, propaganda was one of the most effective formats to reach the masses. The general theme was for folks to help war efforts in any number of ways. This included remaining loyal to the U.S., with messages like the now-famous “Loose lips might sink ships.” This was a reminder not to talk with someone who may share information with enemy forces.

Women were also encouraged to work or do their part to help the workforce while men were gone fighting overseas. When rations were put into place, print and radio propaganda reminded people to use items sparingly and that in doing so would help war efforts.

Newspapers and magazines were a daily source of news for the homefront. Folks learned what was happening overseas through the news, but they also got a big dose of others’ opinions by reading letters to the editor. This served as a regular format in which the general public could write in and share their take on the war, in whatever topic, oftentimes those that were controversial, such as married women joining or re-joining the workforce.

When it came to talking to friends and family members, not much changed. They still had to do it the old-fashioned way: writing letters. Phones were sometimes available, but these occurrences were rare and unpredictable. In the meantime, soldiers wrote long, handwritten messages to loved ones (and vice versa). Letters usually arrived weeks after they were mailed, but thanks to the new process of V-mail, short for Victory Mail, this was a big improvement.

By utilizing V-Mail, the process could be streamlined and sped up. Here’s how it worked: letters were censored, then copied onto film. Once the films arrived in their country of destination, the films were copied onto new, smaller paper.

V-Mail is said to have greatly reduced shipping speed and space. Previously, it would have taken 37 mail bags to carry 150,000 letters. With V-Mail, the same volume could be carried in a single sack, further reducing weight from more than 2,500 pounds, down to just 45.

WWII saw many forms of communication, including updated technology that allowed messages to be delivered and sent faster, and with higher levels of security. It’s a war that changed communication standards and the way ranks were able to talk to one another.