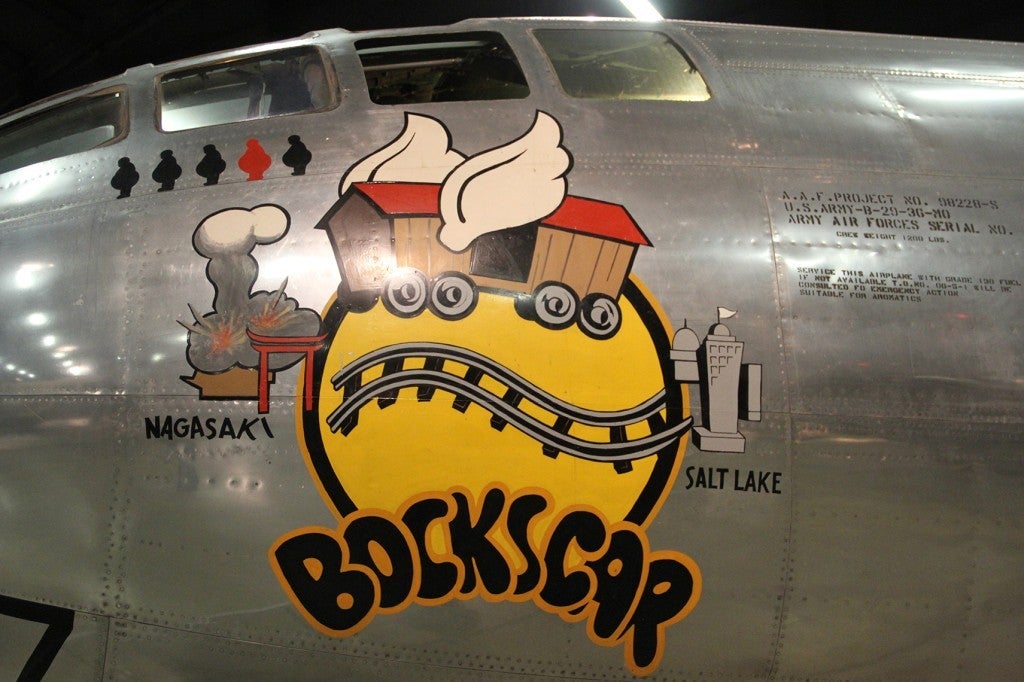 From the court-martial of Billy Mitchell to Robin Olds’ mustache, U.S. Air Force history is filled with examples of Airmen thumbing their nose at authority. So of course what started as a way to identify friendly units in mid-air in World War I quickly evolved into a way of thumbing one’s nose at military uniformity and authority. The unintended consequence of that effort is a gallery of beauty and style — a lasting legacy in the minds of generations to come.

This art form is as old as powered flight. In the context of war, crews created designs to immortalize their hometowns, their wives and sweethearts back home, to earn themselves a name in the minds of their enemies, or provide some kind of psychological protection from death, among other motifs.

Some things were universal. “Mors ab alto” is Latin for “Death from above.” And then some art was based entirely on the record of the plane. Like the B-29 Superfortress Bockscar, below, who dropped the atomic bomb dubbed Fat Man on Nagasaki, Japan, and whose nose art depicts a train boxcar nuking Nagasaki.

Nose art was also a great way to build esprit de corps with the crew and maintainers around a plane, as seen in this photo of the crew of Waddy’s Wagon recreating their own nose art.

Of course, a list of the best WWII nose art would not be complete without the pin-ups.

Nose art wasn’t all sexy women and bombs, though. Some crews used their nose to (deservedly) brag.

And sometimes, when your war record is long enough, it’s okay to let the world know you’re watching the clock.

Popular cartoons were also featured on World War II-era planes. Walt Disney famously looked the other way (in terms of copyright infringement) for much of the art done in the name of winning the war, notably on bomber jackets and nose art. The RAF’s Ian Gleed flew a Supermarine Spitfire featuring Geppetto’s cat Figaro.

Next time you watch Dumbo with your kids, remember that Dumbo dropped ordnance on Japan and was said to be fairly accurate.

Bomb icons depicted the number of missions flown over the enemy. For some icons weren’t enough. Thumper here took the war personally and marked the name of each city it bombed.

Nose art was also used to complain (as all troops do) as a way to deal with the monotony of deployed life, the lack of supplies, and/or the frustrations of the crew to keep their bird flying, as seen by Malfunction Sired by Ford.

Or it was used to brag that they could keep their girl in the air, with whatever they had lying around.

Some crews definitely brought their A-game to the art form, like the crew of this B-29 Superfortress.

Others tried, but were ultimately (and obviously) better suited to fighting the war than designing the nose of their B-24 Liberator.

The award for all-around best nose-art in World War II has to go to the RAF’s James Archibald Findlay MacLachlan, who lost an arm to a combat injury early in the war and thus had to fly with a prosthetic limb. His fighter plane’s nose depicted the hand from his own amputated arm making the “V for Victory” sign.

Now: 6 of the most badass US military test pilots of all time