How the US could have easily lost the Mexican-American War 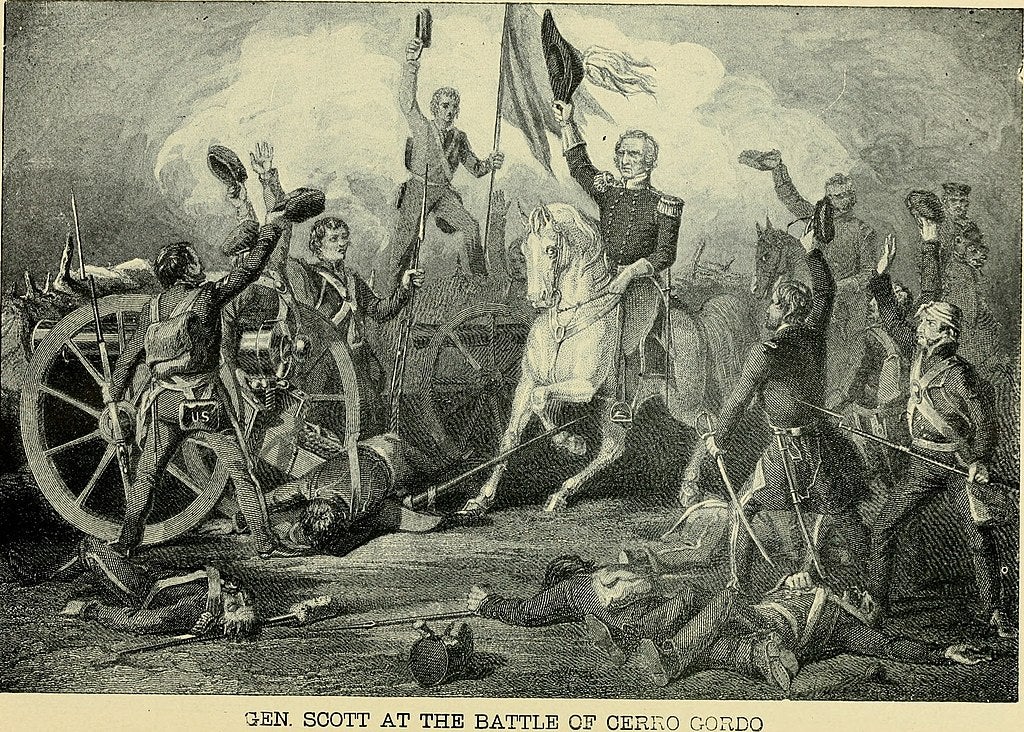 Allegorical depiction of Winfield Scott on horseback during the Battle of Cerro Gordo.

When the United States annexed Texas in 1845, it didn’t sit well with the Mexican government, who considered Texas a part of Mexico. Texas won its independence in 1836 after capturing Mexican dictator Antonio Lopez de Santa Anna and forcing him to sign the treaty that granted its independence.

Mexico refused to recognize the terms of the treaty but maintained a distance from intervening in Texas’ affairs. One sticking point between the nations of Texas and Mexico leftover from the treaty was the southern border – Texas considered the Rio Grande River the border while Mexico claimed it was the Nueces River, a river further north. When the US annexed Texas as a territory, that dispute carried over.

Both sides sent troops to the border region, which soon erupted into a full scale war. Americans thought the war would be easily won by the United States and it was won in less than two years. But had it not been for one American general’s dogged persistence, things might have swung the other way and the United States might look very different today.

On April 25, 1846, 2,000 Mexican troops attacked a 70-man American patrol in the disputed area of Texas, then laid siege to forts in Texas, sparking the Mexican-American War. On paper, the United States forces were outnumbered in many of the battles fought on Mexican soil, and encountered uprisings in New Mexico.

On what is today American soil, the U.S. Army had the advantage of conquering a population of mostly American settlers who welcomed the soldiers in occupying the Mexican territory. In Mexico, however, the population was fiercely patriotic and Mexican conscripts outnumbered and outgunned the Americans. The U.S. advantage in Mexico was that Mexican soldiers didn’t entirely trust their commanders or their meager pay.

The difference maker in the Mexican-American war for the United States was the brilliance of Gen. Winfield Scott. Although he was not a graduate of the U.S. Military Academy, he had a complete understanding of what it meant to be a general, teaching himself everything from strategy to logistics. Scott was also a veteran of the War of 1812, where he fought the British with distinction.

Scott’s plan was a dangerous one, but also a well-considered plan. He established a supply point by capturing the port city of Veracruz. From there, he decided that taking Mexico City would force the Mexican government to the negotiating table, end the war, and cut out a new slice of America.

That’s what happened in the end, but after taking Veracruz, Scott’s victory was all but assured. He decided to march on Mexico City from there, a risky venture, considering Scott would be dragging his army across Mexico while being hundreds of miles away from his main point of supply.

Along the way, the Army could have been ambushed by Mexican forces at any time, He could have lost his entire army to harassment and ambushes as he walked toward the Mexican capital. But that’s not what happened.

Scott took a large baggage train of extra supplies during the march to Mexico City, all carried by mules. Though Mexico had recalled its once-dictator back in from his exile in Cuba, Santa Anna, it did not enjoy some of the benefits Scott did. Scott set up a constant resupply effort in his weeklong siege of the city.

On the other side, Mexican forces were in disarray. The Mexican army was mostly conscripts were poorly paid, and did not trust their own government to be responsible with things like a cohesive plan of defense. Scott was able to rout the Mexicans at Cerro Gordo and march on the capital. Had he been defeated at any point in the march, the Americans might have had to sue for peace.

The American victory with such a risky strategy led the Duke of Wellington to proclaim Scott as the greatest living soldier of the age.