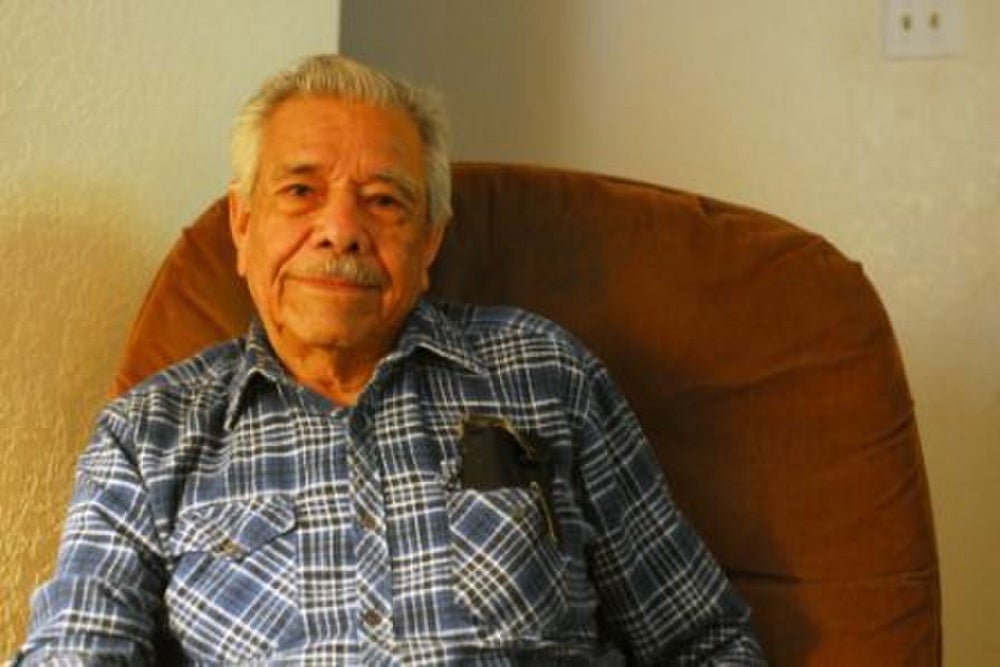 These days, it’s a common political debate. “Dreamers,” illegal immigrants who were brought to the United States as infant children and grew up with full lives and roots in the U.S., are sometimes completely unaware they were undocumented until later in life. Back in the days of the Second World War, we didn’t call them “Dreamers,” but the phenomenon was the same: People like Silvestre Herrera didn’t know they were in the United States illegally until they received a draft notice from the Army.

But finding out he wasn’t technically a citizen wasn’t going to stop Herrera from serving the country that gave him so much.

Herrera was born in Chihuahua, Mexico to loving parents in 1917, but they succumbed to the worldwide Spanish Influenza epidemic that killed millions around the globe the very next year. When he was around one year old, his uncle brought him to the United States and raised him as a farmhand in Texas. Silvestre Herrera grew up believing his uncle was his father and that he was born in El Paso, Texas.

Even when he married an American, had American children, and moved to Arizona, Herrera believed he was living a typical Mexican-American life in the Southwest. It wasn’t until he got his draft notice for the Texas National Guard in 1944 did he find out the truth about his entire life.

“Son, you don’t have to go,” his uncle told him soberly. “They can’t draft you.” The reason for this is because the U.S. Army can’t draft a Mexican citizen. But Herrera wasn’t about to avoid serving in the military and was enthusiastic about giving back to the United States.

“I didn’t want anybody to die in my place,” he later said. “My adopted country had been so nice to me.”

Latinos fighting in American wars is nothing new, even by World War II standards. People of Hispanic descent have fought in every American conflict from the Revolution to the War in Afghanistan. Mexicans raised in the U.S. was also a common occurrence by 1944. People of Mexican descent in the U.S. were twice as likely to have been born and raised in the States than not. Those who served were fiercely dedicated to their adoptive homes and Silvestre Herrera was going to be one of those.

“I am a Mexican-American and we have a tradition,” He once said. “We’re supposed to be men, not sissies.”

The 27-year-old Herrera eventually ended up in the 142nd Infantry Regiment and found himself in the Alsace region of France in March, 1945. Though the war in Europe would be over in a few short months, the fighting on the Western front was as fierce as ever. The 142nd was a critical part of Operation Undertone, a 75-kilometer front designed to push the Nazi back across the Rhine and secure bridgeheads to cross the river.

Herrera’s platoon was just five miles from their objective at the occupied city of Haguenau when they took coordinated machine gun fire – one from a nearby wood and another across a minefield. As the rest of the men in the platoon took cover, Herrera charged one machine gun nest, firing his M1 Garand rifle from the hip and chucking two grenades into the nest. Eight enemy soldiers surrendered to Herrera in that action.

His platoon still found itself pinned down by another machine gun nest, this time protected by a minefield. Knowing full well the grass in front of him was a minefield, Herrera grabbed a two by four, pushing it along in front of him as he crawled across the minefield. Frustrated with his slow progress toward the nest, he tossed it away, stood up, and dashed for the gun emplacement. As he approached, he stepped on two mines, one on each foot. The resulting explosions blew off both of his feet.

He continued forward toward the enemy, running on his knees. The bleeding Mexican-American GI fell to his stomach and laid down rifle fire, keeping the attention of the Nazi machine gun as his platoon flanked the position and knocked it out. Bleeding profusely, Herrera still somehow managed to stay conscious. The Army was able to save Herrera’s knees and were eventually able to fit him with prosthetic feet.

When he was to be awarded the Medal of Honor for the heroism that cost him his feet, President Truman was unsure if the man, still bed-ridden from his wounds, would be able to be present for the award. Sure enough, when the time came, Herrera was in full uniform as he rolled his wheelchair to the President of the United States.

“He told me he would rather be awarded the Medal of Honor than be president of the United States,” Herrera told the Arizona Republic in 2005. “That made me even more proud.”

Just one year after receiving the U.S. military’s highest award for valor in combat, the Mexican government decided to award him Mexico’s Order of Military Merit, its highest award for valor in combat. Herrera is the only soldier ever to wear both. Most importantly, as Arizona’s first World War II Medal of Honor recipient, citizens of Arizona started a campaign to get Silvestre Herrera U.S. citizenship and even raised ,000 to help him purchase his first home.

After the war, Herrera went back to work, prosthetic limbs and all, for much of the rest of his life. According to his surviving relatives, his war injuries never kept him from doing anything physical or raising his family. He died in 2007, sixteen years after his beloved wife, Ramona.