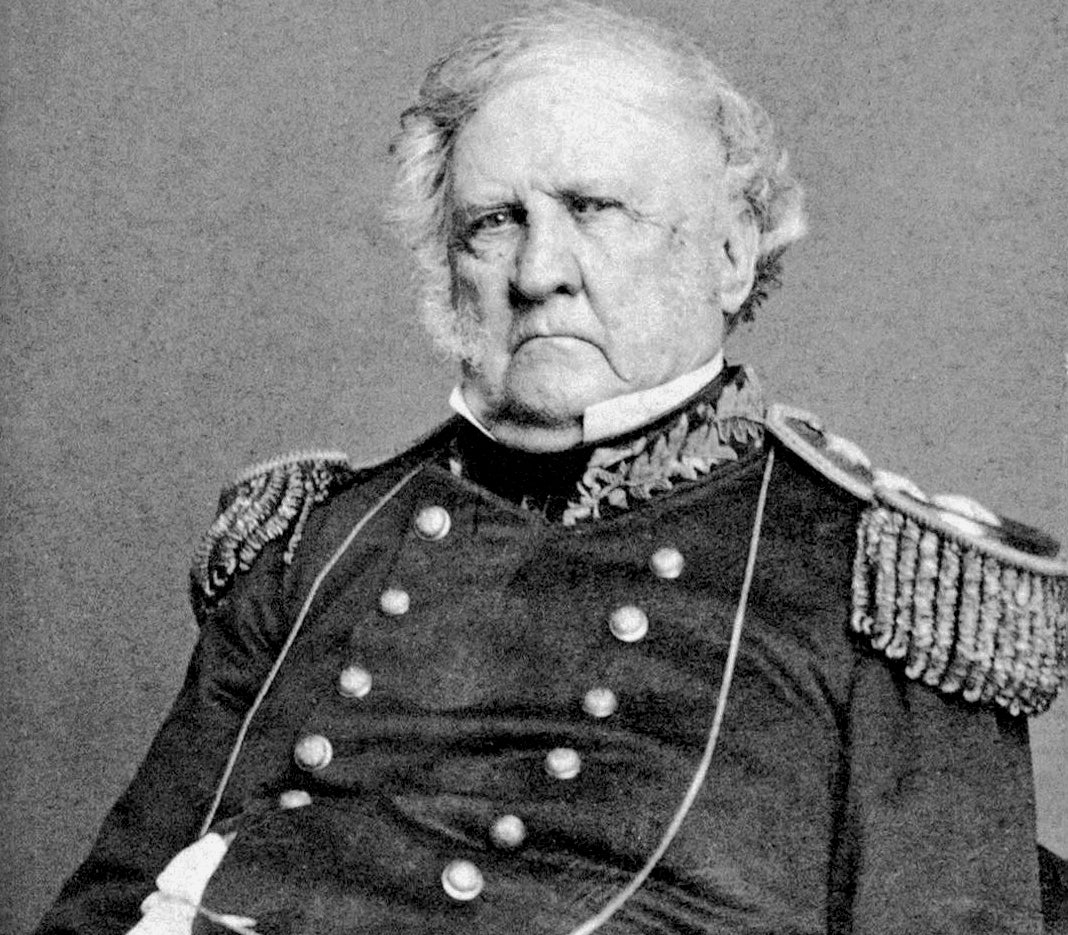 Winfield Scott, the longest-serving general officer in the history of the United States Army, served an astonishing 53 years in a career stretching from the War of 1812 to the Civil War. Known as “Ol’ Fuss and Feathers” for his elaborate uniforms and stern discipline, he distinguished himself as one of the most influential U.S. commanders of the 19th century.

Born in Virginia , he briefly studied at the College of William and Mary before leaving to study law, and served for a year as a corporal in the local militia. He received a commission as a captain of artillery in 1808, but his early career was less than auspicious. He vehemently criticized Senior Officer of the Army James Wilkinson for allegations concerning treason, and after a court-martial was suspended by the Army for a year.

After being reinstated, he was promoted to lieutenant colonel as the War of 1812 was getting underway. Serving in the Niagara Campaign, he was part of surrendering American forces during the disastrous crossing of the river into Ontario and exchanged in 1813.

After his successful capture of Ft. George, Ontario in 1813, he was promoted to brigadier general at the exceptionally young age of 27. He played a decisive role at the battles of Chippewa and Lundy’s Lane, earning him acclaim for personal bravery and a brevet promotion to major general, but his severe wounds during the second battle left him out of action for the rest of the war.

Following the war, Scott commanded a number of military departments between trips to Europe to study European armies, whom he greatly admired for their professionalism. His 1821 “General Regulations of the Army” was the first comprehensive manual of operations and bylaws for the U.S. Army and was the standard Army text for the next 50 years.

After serving in a series of conflicts against the Indians, including the Blackhawk, Second Seminole and Creek Wars. When President Andrew Jackson ordered the Cherokee removed from Georgia and other southern states to Oklahoma in 1838-39, Scott commanded the operation in what became known as the “Trail of Tears,” when thousands of Cherokee died under terrible conditions during the long journey.

In 1841, Scott was made Commanding General of the U.S. Army, a position he would serve in for 20 years. When President James Polk ordered troops to territory disputed with Mexico along the Texas border, Scott appointed future president general Zachary Taylor to lead the expedition while he stayed in Washington. This was under pressure from Polk, who worried about Scott’s well known presidential aspirations. When the Mexican War subsequently broke out, Taylor grew bogged down in northwest Mexico after an initial series of victories, and it became clear that the northern route to Mexico City was no longer viable. Scott decided to personally lead a second front in order to break through to the Mexican capital.

Scott and his army’s landing at Vera Cruz, Mexico marks the first major amphibious landing by a U.S. army on foreign soil, and they seized the strategic port after a short siege. Roughly following conquistador Hernan Cortes’s historical route to Mexico City, U.S. forces won a series of victories against generally larger Mexican armies. Scott showed great skill in maneuver warfare, flanking enemy forces out of their fortifications where they could be defeated in the open. He successfully gambled that the army could live of the land in the face of impossibly long supply lines and after six months of marching and fighting, the U.S. seized the capital, putting the end to most resistance. The campaign had been a resounding success, with no less an authority than the Duke of Wellington, hero of Waterloo, declaring him “the greatest living general.”

Scott was an able military governor, and his fairness towards the conquered Mexicans gained him some measure of popularity in the country. But his vanity and political rivalry with Taylor, along with intercepted letters showing a scathing attitude towards Washington and Polk, lead to his recall in 1848.

Scott’s presidential aspirations were dashed when he badly lost the 1852 election to Franklin Pierce after a lackluster campaign. Continuing as commander of the Army, he was only the second man since George Washington to be promoted to Lieutenant General. By the outbreak of the Civil War in 1861, however, Scott was 75 years old and so obese he couldn’t even ride a horse, and Lincoln soon had him replaced by general George B. McClellan. His strategic sense had not dulled. His “Anaconda Plan” to blockade and split the South, first derided by those seeking a quick victory, proved to be the strategy that won the war.

Scott was a vain man, prone to squabbling with other officers he held in contempt, and his political aspirations lead to great tensions with Washington during the Mexican War. His command of the “Trail of Tears” put him at the forefront of one of the most disgraceful episodes in the U.S. treatment of Native Americans. But his determination to turn the U.S. Army into a professional force, his immense strategic and tactical skill, and a career that spanned over five decades makes him one of the most influential figures in U.S. military history.