How the US military adopted the legendary .45 ACP cartridge - We Are The Mighty

How the US military adopted the legendary .45 ACP cartridge 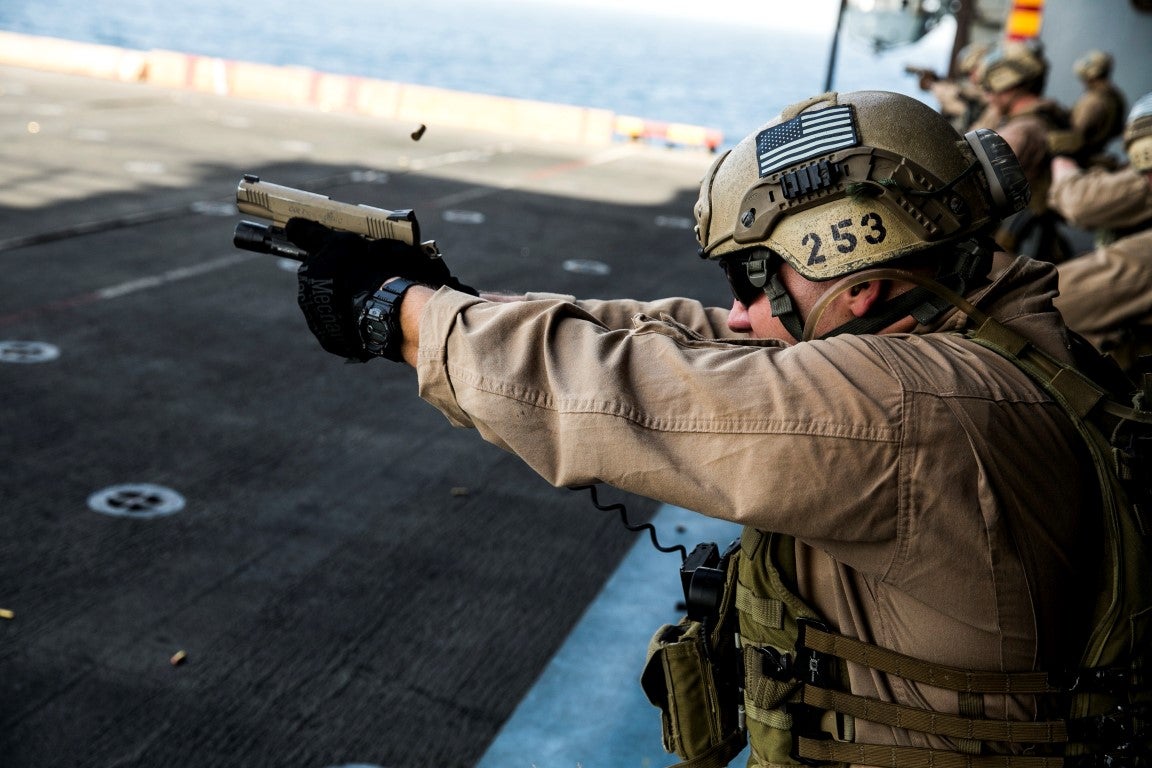 ARABIAN GULF (Oct. 5, 2015) U.S. Marine Cpl. Alex Daigle fires at his target with an M45 1911 A1 pistol during a deck shoot aboard the amphibious assault ship USS Essex (LHD 2). Daigle is a member of the 15th Marine Expeditionary Unit’s Maritime Raid Force. During the shoot, the Marines executed shuttle runs before firing to practice shooting while their bodies were fatigued. The 15th MEU, embarked aboard the ships of the Essex Amphibious Ready Group, is deployed to maintain regional security in the U.S. 5th Fleet area of operations. (U.S. Marine Corps photo by Cpl. Anna Albrecht/Released).

In 1892, the U.S. Navy and Army adopted the Colt M1892 chambered in the .38 Long Colt cartridge. The sidearm was the first general issue double-action revolver with a swing out cylinder to be used by the U.S. military. On the cutting edge of technology, the M1892 was considered to be a good choice for a military sidearm at the time. In fact, Teddy Roosevelt famously carried one at San Juan Hill. However, the battlefield proved to be a rude wake-up call for the new revolver.

In 1899, reports started to come back from troops complaining about the M1892. These complaints came from the Philippines campaign where U.S. troops were battling a local insurrection. The Moro people in the southern islands of the former Spanish colony resisted American colonization as they had the Spanish. This conflict came to be known as the Moro Rebellion or the Philippine-American War.

The Muslim Moros practiced a culture of jihad against U.S. troops. Their fanatical and suicidal battlefield tactics made them dangerous enemies. Against this level of commitment, the M1892 was found to be lacking in stopping power, even at close range. One example in 1905 was recounted by Col. Louis A. LaGarde:

“Antonio Caspi, a prisoner on the island of Samar, P.I. attempted escape on Oct. 26, 1905. He was shot four times at close range in a hand-to-hand encounter by a .38 Colt’s revolver loaded with U.S. Army regulation ammunition,” Col. LaGarde wrote. “He was finally stunned by a blow on the forehead from the butt end of a Springfield carbine.”

Col. LaGarde went on to note that the shot placement on Caspi was actually quite good. Three rounds struck his chest and perforated his lungs. Of these three, one exited his body, another lodged near the back and the third lodged in subcutaneous tissue. The fourth round went through his right hand and exited his right forearm. Instances like these led to the conclusion that the .38 Long Colt simply didn’t have the power to effectively stop a threat. The Army needed something stronger.

As an emergency response, the Army began re-issuing the M1873 Colt Single Action Army revolvers chambered in .45 Colt. Still, a modern solution was needed. Luckily, the U.S. Cavalry had already been searching for a replacement for the Colt SAA and John Moses Browning already had the answer.

In 1904, Browning designed the .45 Automatic Colt Pistol Cartridge for his prototype Colt semi-automatic pistol. The cartridge featured increased stopping power over both the .45 Colt and .38 LC and successfully passed the Cavalry and big Army trials. As a result, the .45 ACP became the standard pistol cartridge for the U.S. Army and the required caliber for its next standard-issue sidearm, the M1911. As fate would have it, Browning would also provide the Army with the pistol to match his cartridge with the Colt 1911.

Today, the .45 ACP and the 1911 are seen as All-American, back-to-back World War-winning classics. Although firearms technology has advanced to propagate the popularity of the smaller 9x19mm cartridge, the .45 ACP remains popular with civilians, law enforcement and military units. Companies like Colt and Kimber continue to manufacture 1911 pistols chambered in .45 ACP for competition shooters, SWAT units and even special forces.