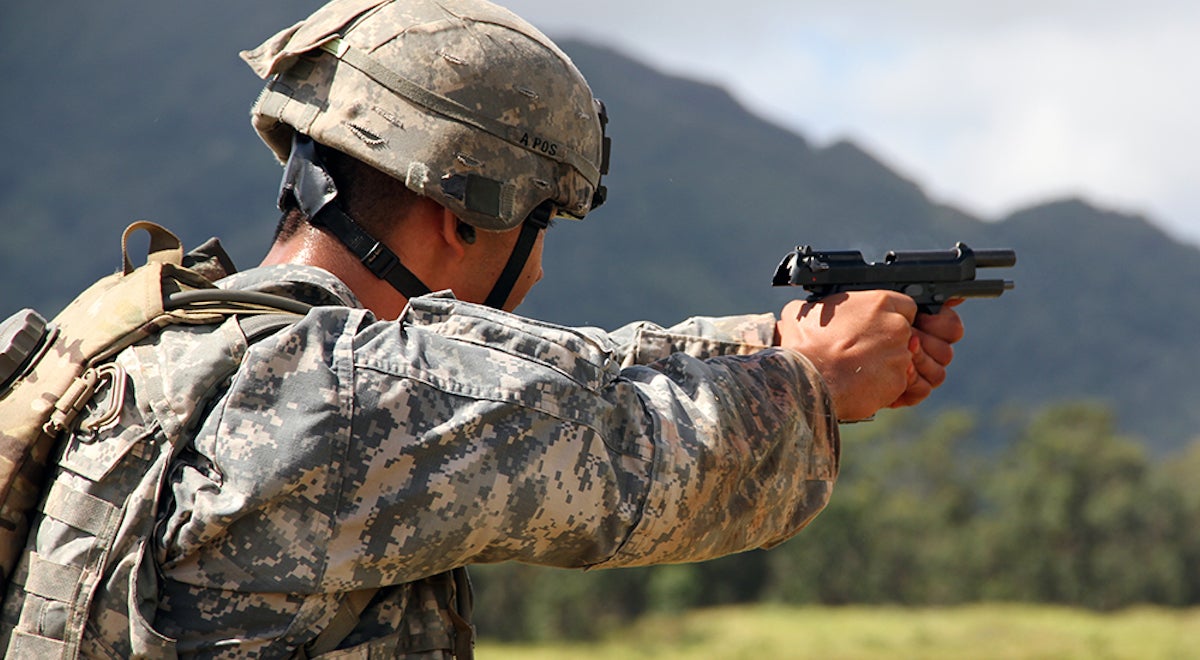 The replacement of the Colt M1911A1 with the Beretta 92F as the primary sidearm of the U.S. military in 1985 was a controversial move. Not only was the military dropping from the hard-hitting .45acp to the smaller 9x19mm, but the adoption of an Italian pistol over an all-American Colt just seemed plain wrong. On top of this, the 92F, later designated the M9, was actually beat out by its competitor, the SIG Sauer P226, in the competition for the government contract. It was the 92F’s lower price point that ultimately won Beretta the coveted contract. In 2017, the Army announced the winner of its Modular Handgun System competition and replacement for the M9 to be the SIG Sauer P320. Designated the M17 and M18, the new SIGs are making their way into the armories and holsters of service members across the military as other branches followed the Army’s lead in adopting the new handguns to replace the M9. As the old Beretta is phased out, let’s take a look at why many troops won’t be mourning its departure.

The M9 is a full-size combat handgun made mostly of metal. Weighing in at 34.2oz unloaded, you certainly notice it strapped to your thigh or on your hip. A product of its time, many troops find the M9 to be unnecessarily heavy for a piece of kit that few of them will ever actually draw in combat. By comparison, the M17 and M18 weigh 29.4oz and 26oz respectively. While this may not seem like a huge difference, the old infantry adage comes to mind: ounces equal pounds and pounds equal pain. Additionally, the new SIG platform offers a more compact and modular weapon system to serve more suitably in a wider array of duty roles.

A weapon can perform exceptionally, but if it’s difficult to use, then it loses its effectivenes. Just look at SOCOM’s Mk23. The handgun exceeded the stringent requirements put forth by America’s elite operators, but it was large, heavy, and cumbersome. As a result, it goes largely unused. The M9 suffers from this problem too. In addition to the size and weight previously mentioned, the M9 has a large grip that troops with smaller hands can find difficult to hold in a solid shooting grip. It also makes it difficult to eject the magazine one-handed. Furthermore, the M9 has a safety/decocker on the slide rather than on the frame. This makes it difficult to operate even for troops with medium-sized hands. On top of that, the safety/decocker sits high on the slide and sweeps down 90-degrees from the muzzle. This means that it’s possible, and common, for the user to decock the M9 and engage the safety depending on how they rack the slide.

Let me preface this by saying that the Beretta 92F is a very reliable firearm. During its testing, the handgun survived temperatures of −40 and 140 °F, being soaked in salt water, being dropped on concrete, and being buried in sand, mud, and snow. The 92F also boasted an impressive 35,000 mean rounds before failure during the tests. Its large ejection port and near-straight blowback design also make it less prone to jamming. However, the M9 suffered heavily as a result of government cost-saving. Although Beretta won the contract for the M9, the contract for the M9’s magazines was given to Check-Mate Industries. The original Beretta magazines were made by Mec-Gar, an industry leader famed for producing reliable and high-quality magazines. Combined with the fine sand of the Middle East, the lower-quality Check-Mate magazines led to feeding issues in the M9. Airtronic eventually took over the magazine contract and patterned its magazines after the OEM Mec-Gars. Additionally, after years of heavy use in adverse environments, the military’s stock of M9s are prone to failure in their locking blocks.

The M9 features a double-action trigger. This means that the weapon can be fired by a long trigger pull which cycles the hammer back before releasing it. It can also be fired single-action with the hammer back. Generally, a double-action trigger acts as a safety mechanism. With the hammer in the down position, significantly more force is required to pull the trigger and fire the weapon compared to a single-action shot from the cocked position. As a result, many shooters argue that the inclusion of a manual safety is redundant. Because of this, troops have to disengage the safety (which can be difficult, see 2) and overcome a heavy first-shot trigger pull in order to engage a target. Although the new M17 and M18 also feature manual safeties, their striker-fired actions provide an easier trigger pull that is consistent with every shot.

The military’s adoption of the 9x19mm cartridge was met with much concern. Although troops were able to carry more of the smaller rounds, the 9mm lacks the punch of the larger .45acp. “If you’re using an M9 in a firefight, be sure to punch it forward with each shot. It makes the bullets go faster,” one Army sniper sarcastically commented. The argument over capacity versus stopping power isn’t likely to end any time soon, and the M17 and M18 are still chambered in 9mm. However, in 2019, the Army introduced a new hollow-point 9mm round for its new pistols. Designated as the XM1156, the new round is described as “barrier blind”. This means that it can penetrate certain types of cover like windows and doors without expanding and losing much of its stopping power. Like other barrier blind ammo, the XM1156 is able to punch through obstacles and retain enough inertia to expand within its target and cause maximum trauma, thereby increasing the round’s lethality.