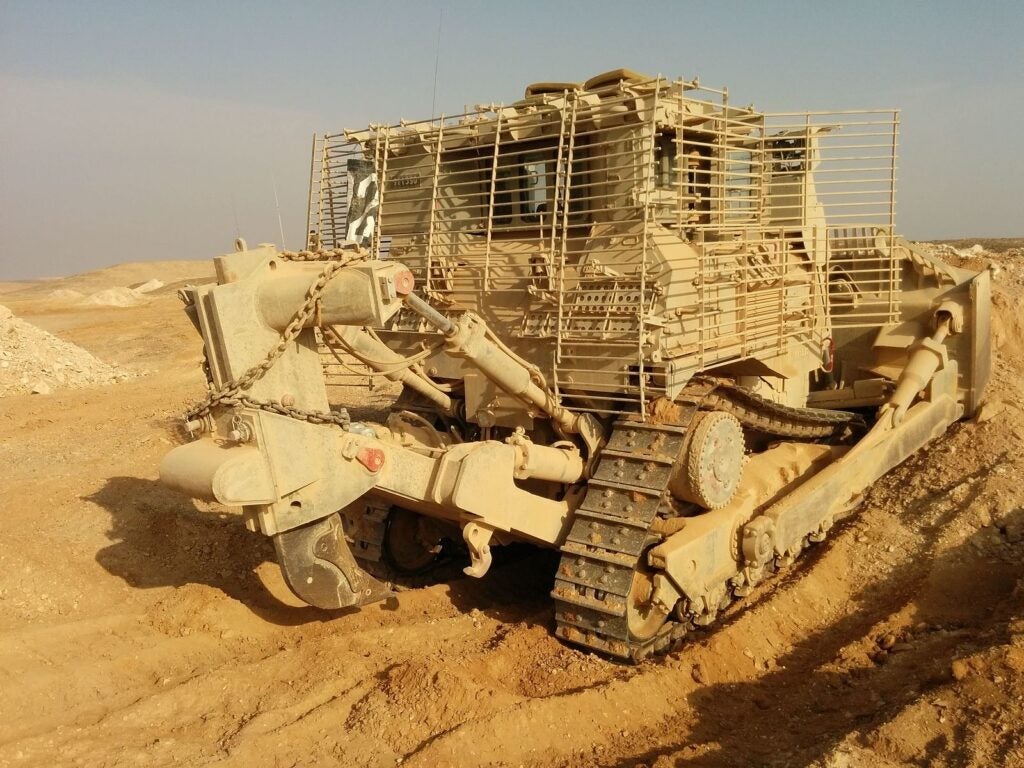 Bulldozers are a standard piece of equipment for military engineers. Of course, performing engineering tasks on the battlefield is dangerous and bulldozers are often armored to protect their operators. The Israel Defense Forces sometimes field their bulldozers in a more direct combat role, necessitating more armor than any other bulldozer in the world.

The IDF uses the Caterpillar D9 bulldozer. Nicknamed Dooby, Hebrew for teddy bear, the CAT D9 is heavily modified with specialized armor to protect it from direct attacks. The Israeli-made armor kit includes bulletproof glass to protect the driver and commander, slat armor to protect against shaped charge weapons, and reinforcing around mechanical components. In all, the armor package adds 17 tons to a standard CAT D9, but makes it impervious to RPGs, landmines, and IEDs. The IDF Combat Engineering Corps can also add machine guns, smoke projectors, and grenade launchers to the CAT D9.

As with other combat bulldozers, the CAT D9 excels at digging moats, building earth fortifications, recovering other vehicles, and clearing obstacles like embankments and tank traps. The IDF employed it in these more traditional roles since the Sinai War in 1956. However, during the 1982 Lebanon War, the bulldozers took a more frontline role conducting route clearance. This started the evolution of the CAT D9’s armor package.

During the Second Intifada, a major Palestinian uprising from 2000-2005, the D9 earned a reputation as an effective counter-insurgency vehicle. Its armor allowed it to withstand RPGs and explosive charges exceeding 220 pounds. In addition to route clearance, the dozers were used to raze houses being used by militants. This tactic prevented IDF soldiers from having to conduct hazardous breaching and room-clearing operations and convinced some enemy fighters to willingly surrender.

To further reduce the risk of life, the IDF modified some CAT D9s with remote controls. Employed during extremely high-risk operations, these dozers allow the operator to remain at a safe distance while the D9 performs its task downrange. In 2014, Guinness World Records recognized the IDF CAT D9 as the most armored bulldozer in the world. Five years later, the dozer’s survivability was improved further with the addition of the Iron Fist active protection system to intercept anti-tank missiles.

The CAT D9 was first introduced in 1954. Its power, durability, and reliability have made it one of the most popular track-type tractors in the world. Combined with up-to-date armor packages and equipment, the IDF has turned it into one of the most capable combat engineering and counter-insurgency vehicles in the world.