Why Boot Campaign wants you to lace up this holiday season 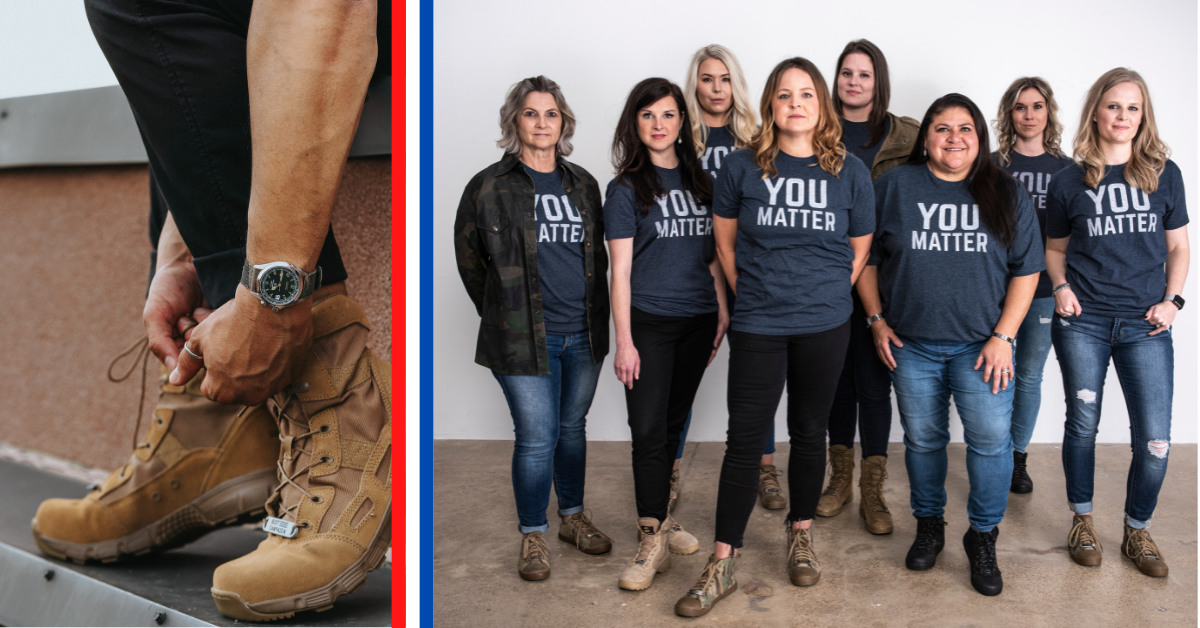 Boot Campaign was founded to outwardly express the founders gratitude for active duty service members, veterans and their families by lacing up one of the most visible signs of military service. Combat boots, of course.

Since 2009, the organization has grown their mission to focus on the issues impacting the military community. At the top of the list for the nonprofit is addressing invisible wounds. Boot Campaign is dedicated to uniting American’s to honor and restore the lives of veterans and military families through individualized, life improving programs.

“Some who serve return home differently than when they left. Some are scarred physically, morally, or mentally but all are certainly changed. And sadly, we’ve lost more veterans to suicide than we have on the battlefields of the Global War on Terror,” Shelly Kirkland, CEO of Boot Campaign said. “As I have struggled myself with anxiety and post traumatic stress, I know how hard it can be to take that first step and ask for help.”

In 2021, Brown University released its Costs of War study. Research revealed over 30,000 post 9/11 veterans had committed suicide –– which is 4x the number of service members killed in combat during the 20-year war on terror.

“I want veterans to know that their service, their sacrifice, their wounds — seen and unseen — and most importantly their lives matter,” Kirkland said. “Together we can do more to help those who laced up their boots first for us, to protect and defend our freedoms and I want as many as possible to join me in that effort.”

As the daughter of an Air Force veteran, granddaughter to an Army veteran and cousin to a Marine veteran, serving those who serve runs deep. Kirkland is also passionate about brain health. She spent years working side by side with clinicians and researchers who were investigating the effects of novel treatments for brain injury and PTSD at The University of Texas at Dallas’ Center for Brain Health before joining Boot Campaign.

“Freedom is not a concept. It’s a commitment. And for the brave men and women that are serving and have served our great country, their commitment is clear for all to see,” Kirkland said. “Yet, for the rest of us –– how committed are we to them? How do we show our gratitude for their service and sacrifice?”

Through the nonprofit’s health and wellness program, veterans can apply for a personally tailored plan to support their needs. Things like specialized therapies, medical treatments and nutrition are coordinated for candidates chosen for the program.

The organization also serves the veterans’ families, too.

Santa Boots began in 2015 after Boot Campaign began recognizing how difficult the holidays can be for veterans and service members. It drives patriotism and engages the community in helping meet service members’ needs and striving to make the holiday season brighter. Being supported through the program are those experiencing financial hardship, health challenges or caring for a wounded, injured or ill veteran. The program also gives back to those currently stationed or deployed in the Armed Forces overseas.

Meg Jones is the Program Manager for Santa Boots and known as proudly as its “Chief Elf”. “In my book there’s no such thing as too much holiday spirit,” she laughed. “I normally have four full-sized fully decorated Christmas trees, a handful of decorated ‘mini’ trees, along with a multitude of additional indoor and outdoor decor. My husband jokes that if you sit still long enough you’ll get decorated too.”

Giving back around Christmas time has always been special for her, she added. “Growing up I spent a lot of time working with my mom at the church providing meals as well as Christmas shopping each year through the Angel Tree program,” Jones explained.

Being a part of Boot Campaign is more than just a way to give back and do good, though. As the wife of a retired Marine Corps combat-wounded veteran and the granddaughter to two veterans, the military community is and always will be family. And the losses and hurts cut deep.

“In 2012, my husband lost a childhood best friend – a Marine veteran – to suicide. If through Boot Campaign we are able to save one life, that’s one family who won’t have to hold the title of White Star Family,” Jones said. “I’m honored to be able to connect the dots for veterans to find the root cause of the issues plaguing them every day and help return them to their personal 100 percent.”

Kirkland echoed the sentiment. “For me professionally, I have committed my career to veterans and military families. Personally, the gift of service and sacrifice veterans and military families freely give has shaken my soul,” she shared. “They challenge me. They make me laugh, and at the same time, I’ve shed many tears for them and with them. They also motivate me and drive me to do better, each and every day.”

As for the entire team at Boot Campaign and what their hope is for the citizens of this country and how they can truly honor this nation’s heroes and their families –– it’s easy. #LaceUpAmerica

To learn more about Boot Campaign and how you can support the efforts to serve those who serve, click here.