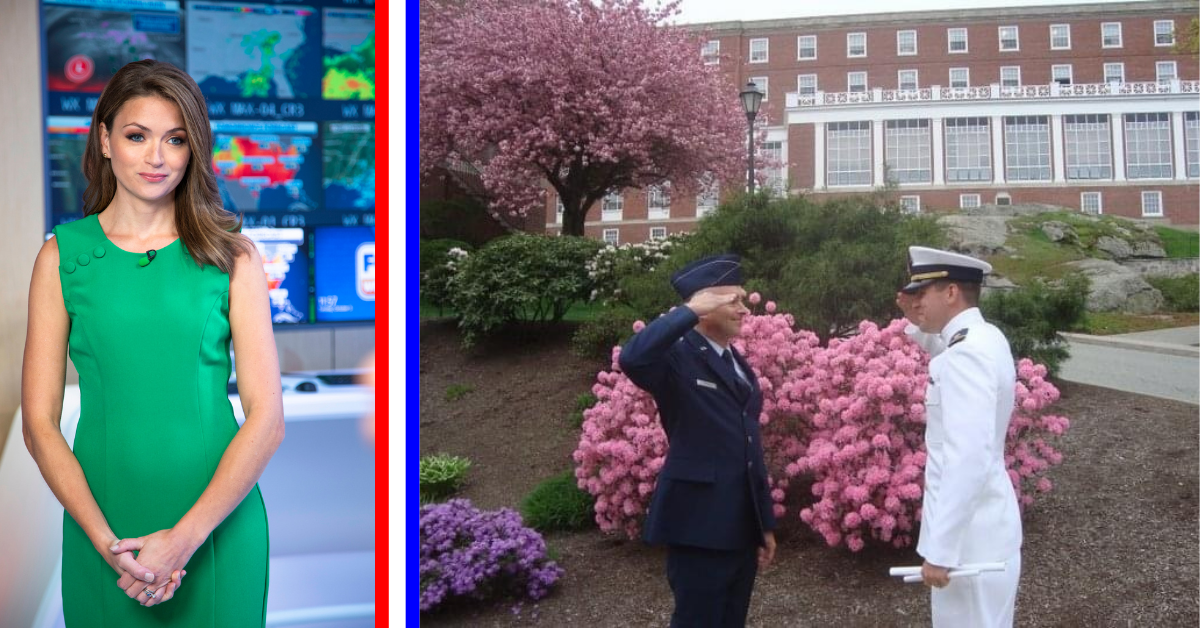 “I was the kid who’d watch weather forecasts all night long,” she laughed. “I wanted to understand how it could be 80 degrees one day but the next we’d have a foot of snow. That crazy stuff happened in Colorado all the time.”

Merwin spent most of her childhood in Colorado Springs while her father was assigned to the Air Force Academy. When a local meteorologist came to her school in the second grade to give a presentation on the science of weather and their job, she was hooked. “I thought it was really cool. I wrote this dream letter to my mom telling her I was going to be a mom and a meteorologist,” she smiled.

Though somewhat tempted to take her weather dreams into the Air Force as a meteorologist, it wasn’t on Merwin’s radar. With grandparents, parents and uncles donning the uniforms of multiple different military branches, it’s still always been a part of her life and story, though. “I basically grew up in a military love fest,” she confessed.

Before signing on with FOX in 2021, Merwin spent her early career doing local and national network weather. It’s where she’d meet her eventual husband who was also a meteorologist, at the time.

During their first 12 months of marriage, her husband was gone for 10 of them. Between his time underway on a large cutter and then his selection to Officer Candidate School, it was a long first year. Merwin shared the story of him leaving for OCS when she was eight weeks pregnant and their reunion at his commission not long before she gave birth to their first child.

“It really makes you a strong individual. I really feel like no matter what God throws my way, I know I can get through it. He’s placed certain things in my life which make who I am,” she added. Merwin also credited the support and close-knit bond with her fellow Coastie spouses for getting through her first underway deployment. “It’s something I truly feel is unique to the Coast Guard.”

Her time as an Air Force kid and the advice of those spouses would prepare her for the continuing challenges. “I had to take three years off of my own career just like most military spouses when we were PCSing and having our boys,” she shared.

After actively serving the for five years, her husband transitioned out of the Coast Guard in 2014 and into the role of stay-at-home dad. “In my head it’s like I’m still in it because it’s just a natural part of my fiber. The structure of living a military life definitely translated to me as an adult. I’m very organized, task oriented and also I’m just oriented to the fact of how your home is where your people are,” she said.

For Merwin, that’s with her husband and boys. She had been working weather in Houston for seven years when she got the call from FOX in early 2021. “It just sounded like the dream opportunity. We have the backing of FOX, this huge network supporting you in terms of resources and overall support. We’re being given the ability to build something from the bottom up,” she explained.

FOX News Media announced its intent to launch a brand-new streaming FOX Weather service and app in December of 2020. According to the press release, it features cutting-edge display technology and unmatched weather and forecasting experts surrounding every major weather event, as well as precise local updates. Only hours after the debut, it was number one in the app store for free downloads.

“To be able to get all of these amazing people from different walks of life in different parts of the country and provide people with something dependable and strong … it’s just a really exciting experience. I’m super amped about it and you can just feel the energy here [at FOX],” Merwin said. “We’ve built something really special and unique. It’s a new way of getting weather that no one has really had access to before.”

When the family packed up to head to New York for her new role at FOX Weather, she turned it into a military PCS operation. “I had the no-touch room sectioned off plus pizza delivery scheduled for the movers and all the things that go with a PCS. All of our stuff still has like three PCS stickers on it,” she laughed.

Though Merwin always had big dreams of becoming a mother and a meteorologist on a national level, landing her ground-breaking role at FOX Weather is still awe-inspiring for the former military kid and veteran spouse. The word to describe how she feels about it all is simple: grateful.

“I feel so blessed that I am literally doing both of my dream jobs. That’s really special,” she explained. “It’s very rare you’ll meet someone who’s been dreaming of doing something their whole life and then actually gets the opportunity to do it. I count my blessings every day.”