Military archaeological discoveries found by pure luck - We Are The Mighty 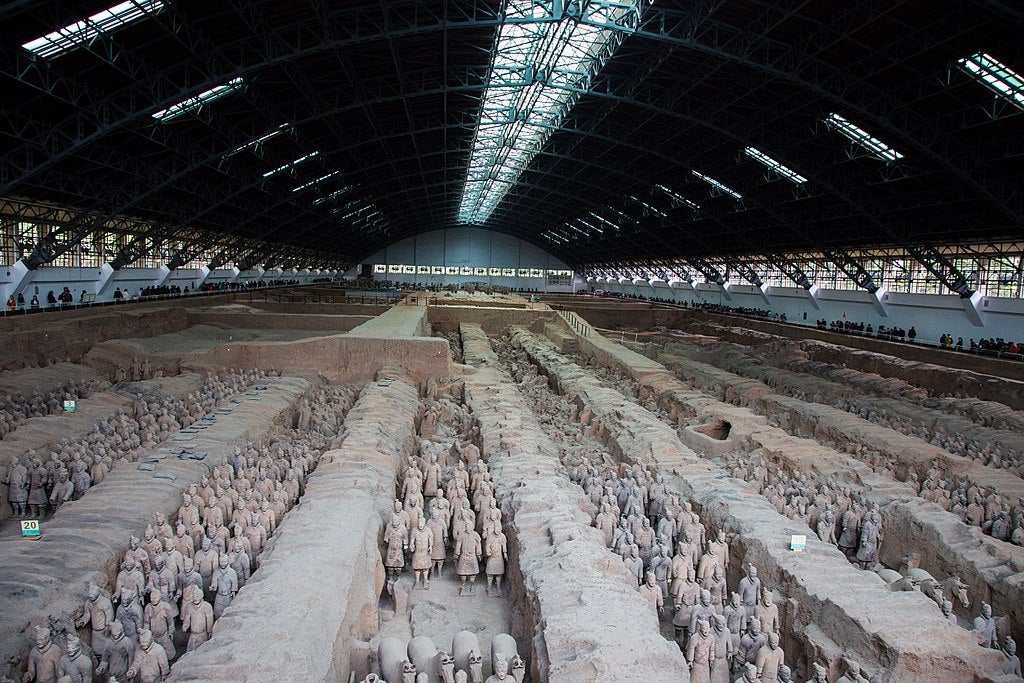 Recent discoveries and studies by historians, historical archaeologists and anthropologists have taken military history’s perception to a new level. In the ancient days, the common man was preoccupied with battle, depicting their skillful tactics and the power of their commanders. Now, military historians have a different view of military forces and those serving in them. The discovery of military archaeological sites has encouraged the community to view the armies as humans and value the lives of those who join them.

This remarkable discovery was found by a group of Chinese farmers digging a well close to the city of Xian. Apparently, the farmers thought they had unearthed a bronze bust or rather an ancient Buddha statue. Archeologists further excavated the site and realized it was one of 8,000 life-sized terra cotta soldiers, chariots and horses. All these were constructed to safeguard their emperor in life after death. Each of the detailed soldiers in the tomb had a unique face, and they are now one of the most valued archaeological treasures in China.

About 4500 years ago, Mesopotamians who lived in present-day Syria modified and repurposed a community monument. The monument was a poppled white dome used to sepulcher the dead. For many years, some of the Mesopotamians climbed the monument’s exterior to place offerings and poured libations over the graves under the monument.

Renovations were done in 2450 B.C., covering the communal area with earthed terraces. The outcome was a stepped pyramid, and the steps were filled with soil and assortments of animal skins, human bones and army slingshot-like weapons. It seems the skeletons were from fallen soldiers, sling shooters and wagon drivers. This suggests the town had a standing army.

Troy is one of the most debated archaeological sites as it is an ancient city where the Trojan War is said to have been held. The war was between two kingdoms; the Kingdom of Mycenaean Greece and the Kingdom of Troy. Scholars have different opinions on whether the legendary war took place in the ancient city of Troy. Even though archaeologists disagree with the legend of Troy, they are certain the site was inhabited thousands of years ago. The city is believed to be built on a site called Hisarlik, located on the Northwest coast of Turkey.

The 66 Roman military camps in Spain

This is a newly discovered Roman military camp rooted back to the ancient Imperial eras. The camps are situated at the foot of the Cantabrian Mountains, where the rivalry between Natives and Romans was. It implies the Roman soldiers went across low and highlands through mountain ridges to stay out of sight. The vast number of camps in the areas suggests the Roman army had huge support, explaining why they conquered the region. The soldiers used these camps during cold winters and could have been their home for months.

Bunkers at old Eastern and Western fronts of WWII

At this archaeological site, the remains of bunkers, tank towers and turret bunkers were discovered, and they are basically bunkers mounted with tank weaponry. The fearsome weapon was an ingenious method of recycling tanks that had been damaged but not destroyed. Tanks that were no longer capable of movement may still have a working turret, a useful defense weapon if mounted inside a bunker. The German-side of the conflict repurposed many captured enemy tanks and converted them to tank bunkers. Examples of tank turrets still exist on the borders of various nations involved in the war.