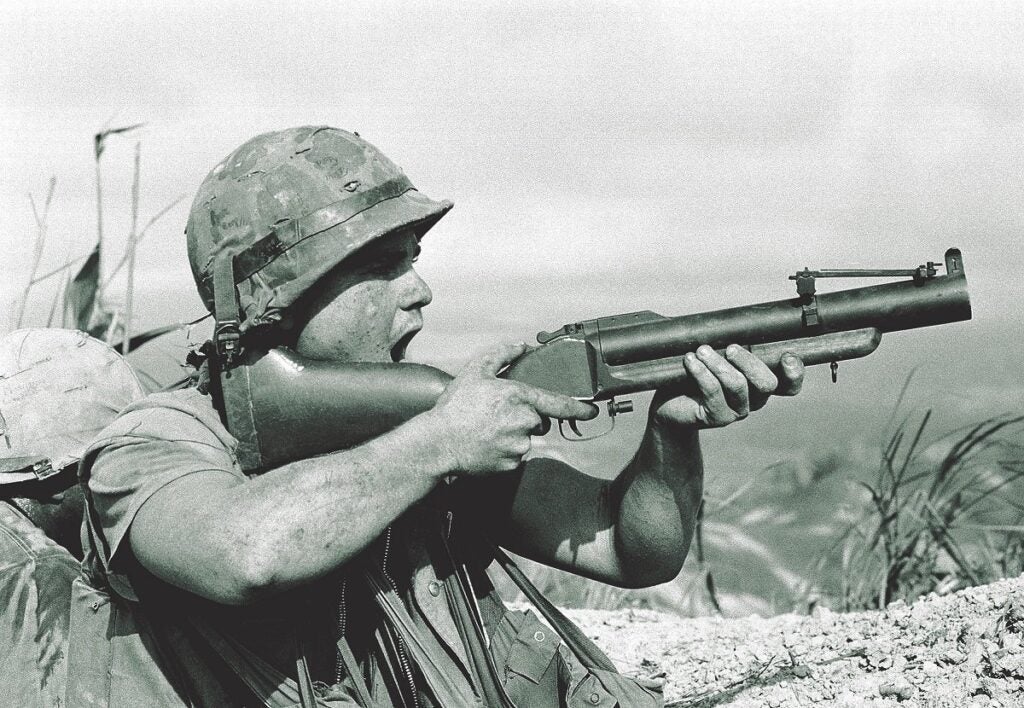 The M79 was used heavily in Vietnam and even saw use in Operation Iraqi Freedom (U.S. Army).

The Navy SEALs take on some of the U.S. military’s most dangerous missions. To do this, SEALs need to be equipped with weapons that maximize the firepower of their small units. During the Vietnam War, the standard U.S. grenade launcher was the venerable M79. Affectionately known as the “Thumper” for the sound that it made when it fired, the M79 was reliable but had a low rate of fire due to its single-shot, breech-loading nature. The SEALs needed something more.

Addressing the primary shortcoming of the M79, Springfield Armory experimented with the T148E1. Using a harmonica gun-type configuration, the semi-automatic T148E1 was meant to put more firepower in the hands of a single grenadier. However, the experimental weapon was unreliable and prone to jamming. Instead, the SEALs turned to the Navy engineers at China Lake.

Naval Air Weapons Station China Lake is located in the West Mojave Desert, approximately 150 miles north of Los Angeles. It serves as the Navy’s primary installation for weapons research, testing, and development. Following Springfield Armory’s failure with the T148E1, the SEALs asked China Lake to give it a go. The result was the China Lake Model.

Named after the base where it was created, the China Lake is a pump-action grenade launcher fed by a tubular magazine capable of holding three 40x46mm grenades. With one in the chamber, this gave a single SEAL grenadier four times the firepower over the M79. In fact, thanks to its intuitive design based on the popular pump-action shotgun format, the China Lake allowed a SEAL to fire all four shots before the first one even landed. It was also lightweight thanks to its aluminum construction and easily portable by one man.

The China Lake retained the leaf irons sights of the M79 which were extremely accurate in the hands of a skilled operator. It allowed for firing ranges from 75 to 400 meters and could be adjusted in 25 meter increments. Loaded with high-explosive fragmentation rounds, the China Lake gave SEAL teams the fire superiority they were looking for. It was so popular that other special units like Marine Recon and the Green Berets reportedly used the China Lake as well.

The China Lake was in service from 1967 to 1969. Although the number of China Lakes manufactured ranges from claims of 16 to 50, Navy SEAL historian and curator for the SEAL Museum has confirmed that 22 completed launchers made it on to official Navy records. Although the majority of China Lakes were demilitarized, there are four known examples that survived. Serial number 2 is kept at the Naval History and Heritage Command in Washington, DC; serial number 4 is on display at the National Navy UDT-SEAL Museum in Fort Pierce, Florida; an unknown serial number is reportedly kept under tight security at the Naval Surface Warfare Center Crane Division near Bloomington, Indiana; and serial number 13 is on display at the War Remnant Museum in Ho Chi Minh City, Vietnam.

Attempts to modernize the China Lake began in the 1990s and continued into the early 2000s. However, the adoption of the M32 revolver-type six-shot grenade launcher by the Marine Corps made the China Lake design obsolete. Still, its presence in video games and other popular culture have cemented the China Lake’s place in history as an innovative technological advancement.