‘Outside the Wire’ will bring you inside combat of the future 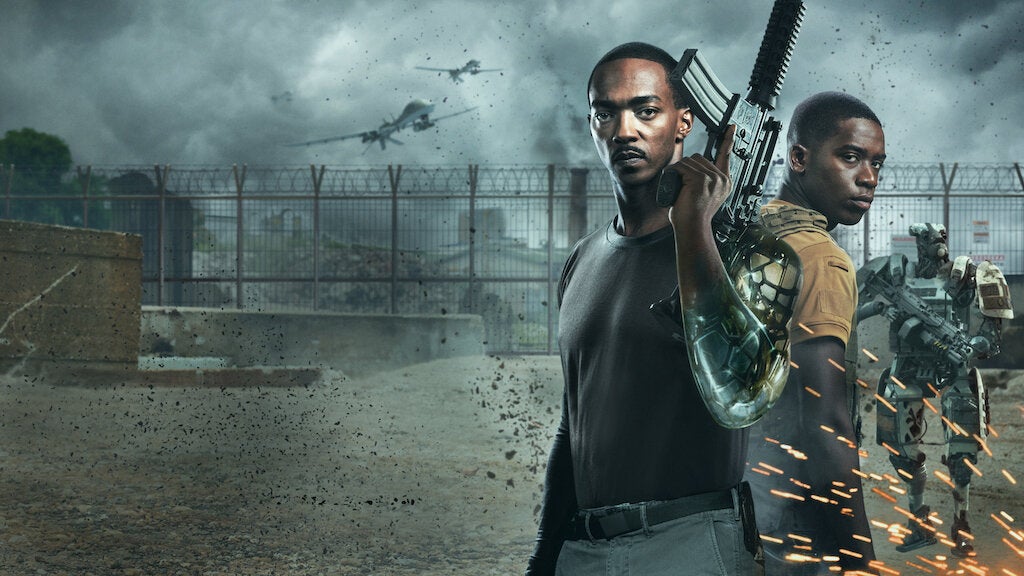 Outside the Wire is a science fiction movie that takes the viewer deep into the world of combat in the future. It’s a world many of us who have served has seen evolve over the last two decades. Starring Anthony Mackie (of Avengers fame) as an android officer who needs a drone pilot played by Damson Idris (Black Mirror), the movie not only delivers amazing action sequences that grimly show a battlefield in the not-so-distant future, but also gives the viewers a chance to examine the blurred lines of what warfare is evolving into.

Director Mikael Håfström presents us with moral questions on what role our technology plays in conflicts and how to live with the morality of that.

The movie starts with giving us the background of a “peacekeeping” mission in Eastern Europe that the United States is involved in years from now. Peacekeeping in name only, as it’s an extremely hostile war that is made even more deadly by both advanced drones and robotic infantry called “Gumps”.

Drone pilot Thomas Harp, fighting the war from the comfort of Nevada, makes a decision that costs the lives of two Marine grunts on the ground. That decision gets him into trouble, and he is sent to the warzone as punishment. There, he receives a hostile welcome (grunts aren’t going to exactly be nice to the drone operator that killed their guys) and is assigned to Captain Leo.  Leo proceeds to take Harp outside the wire on a mission to locate nuclear codes before insurgent leader Victor Koval (played by Pilou Asbæk) can. We also learn that Leo, is himself an android.

Now this is the part, where the military vet in you says…. “Ok, they are taking a drone pilot and putting his POG ass on a mission that takes him outside the wire? Sure”

I thought that too, until you see why.

Outside the Wire then takes on a fantastic action paced journey that both shows why Harp was picked for the mission and also addresses the impact of war by actually being in it.  Harp is immediately confronted with the fact that being outside the wire with boots on the ground is markedly different than dropping bombs from a remote location. The film brilliantly lays out a mosaic of a warzone that goes beyond traditional front lines and shows how modern and post-modern conflicts presents us with situations that are as grey as can be instead of being black and white.

Harp is also confronted with the aftermath of his handiwork. Several times, he sees the destruction he was wrought by decisions that he made coldly and analytically.  Leo, the android on the other hand, guides Harp through the human toll of war and the moral conflicts that arise deep behind the lines of war. At times, you forget who is the human and who is the robot.

As the plot develops, Outside the Wire takes us on plenty of twists and turns as we find out that when the battlefield is blurred, so are friendships. What results is an action packed ending that not only delivers thrills, but also makes the viewer question the humanity that is usually lost and sometimes gained in war.

Outside the Wire will be available for streaming January 15th on Netflix.