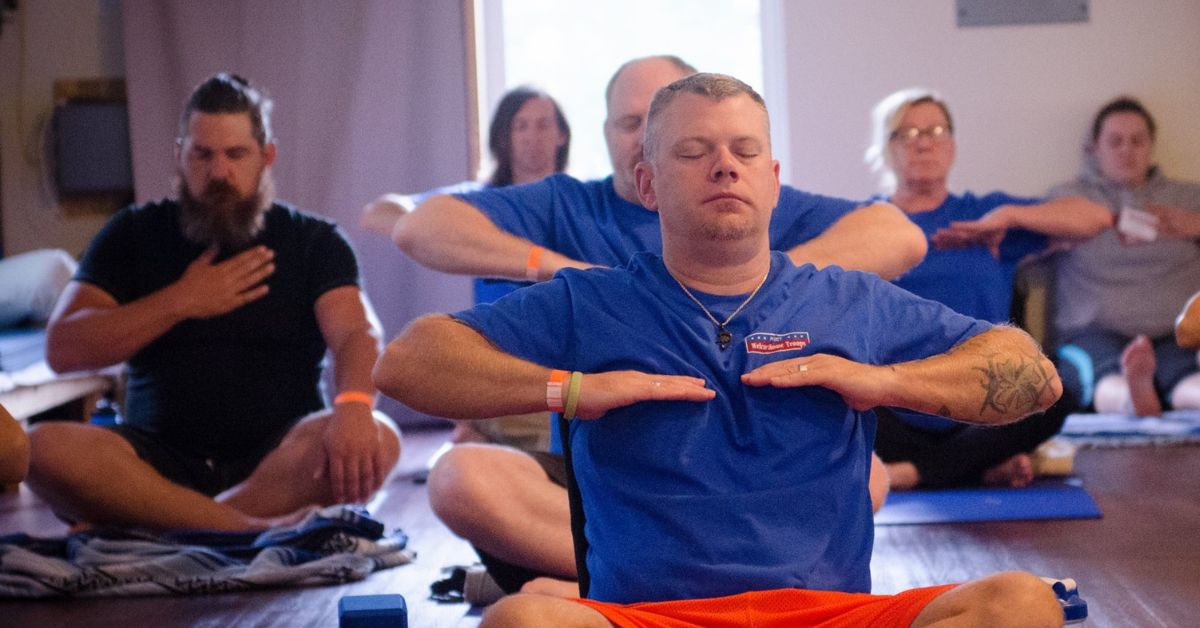 A person’s breathing pattern is intimately linked to the human body’s wellness and Project Welcome Home Troops is using its power to help heal America’s wounded warriors and their families.

As PWHT’s National Director, Leslye Moore is extremely passionate about breath meditation and what it can do to support a high quality of life. Though she is not a veteran herself, Moore feels a deeply personal connection to the military due to her own PTS from her time serving in the Peace Corps alongside many of our servicemembers.

“I knew I wanted to do something meaningful. I don’t know if I was impactful but it made a big impact on me,” she explained.

In 1990 Moore was stationed in the former Democratic Republic of Congo, which was under the dictatorship of Mobutu. Just a year and a half later, the country was in violent chaos.

“The Army in that country hadn’t been paid for six months so they were just rebelling over. Everything had also been sliding sideways with the hyperinflation,” she shared. “We kept waiting for the moment we’d have to evacuate because it was a combat zone and unfortunately I didn’t trust our government to get us out there. I had a whole contingency plan with these Belgium palm oil farmers.”

Living in a remote village inside a mud hut –– she and the other peace corps workers relied on motorcycles to get around. But once dusk came, it wasn’t safe to be outside. The moment to evacuate finally came when a Baptist ministry worker came to their hut in the middle of the night and handed her a piece of paper. His words?

“I think we had to drive like 75 kilometers through the jungle at night. I had to lead everyone and we finally came to this river,” Moore said. “These rivers are like a mile wide filled with crocodiles and hippos. You didn’t go near the water at night because that’s when they feed.”

They all grouped together next to a man with dugout canoes and waited for the light. In the morning, they fought the river to travel to reach the mission location. “Thank God we left when we did. We heard later that the volunteers who stayed were under gun fire that next day,” Moore said.

Thankfully, they all made it back to the United States safely. Not long after their return, Moore began working on her master’s degree in International Development, which required an international practicum. “I went to Rwanda during the civil war under the radar and the embassy was not happy about it,” she admitted.

It was 1993 and she was doing vital research on the HIV and AIDS epidemic. “The country’s conditions were deterorating and everyone knew there was going to be a genocide. I would be driving down the road doging IEDs,” Moore said. “I think I did what I’ve seen our veterans do, just numb down and keep moving.”

One day she went to her post office box to check the mail. Moore was only a hundred feet away when the entire building exploded from a planted bomb in the box next to her own. Between working in a war zone with dying HIV and AIDS patients, it was a struggle.

Though she left just before Christmas, just a few short months later the genocide was underway and she lost many friends. “Most of them were killed in the Rawandan Genocide. Survivor’s guilt was intense for years and it wasn’t until I was at a meditation retreat 11 years later that I cried,” Moore shared. “I cried for three days straight and couldn’t understand why I got to leave and live when they couldn’t.”

It would lead to her passion for power breath meditation and eventual work with Project Welcome Home Troops, a program underneath the International Association of Human Values. “It sprung from what was actually being taught to the civilian population. One of those who attended came from a military family and voiced her belief of how it could help veterans,” Moore said. “At the time I was doing work with Iraq refugees and we were teaching war survivors these techniques. The then-director showed me a video of veterans returning from Iraq and I said, ‘My God, these are my people.’”

Those who opt to take the workshop learn how to use breath-based tools to regulate stress, reduce anxiety and sleep issues. Research on combat veterans returning from Iraq and Afghanistan saw a reduction in improved anxiety and trauma symptoms after just a week of utilizing the techniques taught. Another study saw a reduction in depression.

Prior to the COVID-19 pandemic, they had workshops in 30 different states. Though they had to go virtual, it was a blessing in disguise. They are now impacting military members, veterans and spouses in every single state and multiple countries.

I have done my best to battle my demons through physical activity and counseling, however nothing has come close to the healing that occurred during the PWHT SKY Breathing Meditation Workshop. I honestly feel like I have been given a second chance at life.”

“We’re basically reminding people what they knew coming in as babies and reminding them that they had the power of their breath to release these things,” Moore said. “It’s a very holistic approach and the breath is very powerful. What we see is basically it’s like reaching into a dark hole and pulling, giving them a hand up. The bottom line is human hearts are hurting and everyone needs some healing.”

To learn more about Project Welcome Home Troops and how to harness the power of breath, click here.