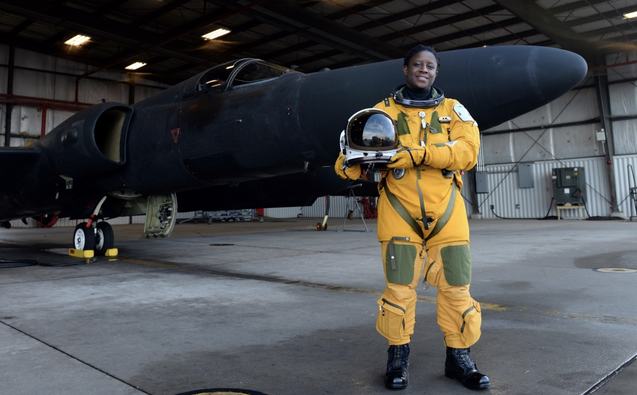 Retired Air Force Colonel Merryl Tengesdal was the first and only Black female U-2 pilot. For her, it’s all about finding opportunity and seizing it.

Born in the Bronx and raised by a single mother, Tengesdal was obsessed with Star Trek. “When I was 7 years old I decided I wanted to be an astronaut and be like Kirk exploring space,” she said with a smile. That show would be a pivotal moment for her life, leading her to set what she called her framework. “I knew I needed to do well in math and science, go to college and become a pilot.”

But she didn’t want to become just any kind of pilot, either. “I wanted to go high and fast with weapons, that’s just how I roll,” Tengesdal said with a smile.

While still in high school, she attended college level programs for science and electrical engineering, which is what she would major in. When Tengesdal graduated, she was only one of three women in the program. “I did ROTC in the Air Force for two years but thought it probably wasn’t the best fit for me. It’s funny how that comes back full circle,” she laughed.

Instead of the Air Force, Tengesdal started talking to a Navy recruiter. Although she was told there were no pilot slots by them, that didn’t stop her. She’d end up on a five-day bus trip to San Diego where she took the required test to become a pilot. Tengesdal was picked up for Officer Candidate School in 1994. “I got wind in ‘96 and picked up helicopters, H60 Bravos and did that for four years. Deployed to the Mediterranean and Arabyian Gulf, doing missions out there,” she explained.

Tengesdal did two more years with the fleet before becoming a T-6 instructor. When that was finished, she went back to where it all started. The Air Force.

She was actually contemplating getting out, her goals still being on getting into space. But then she heard about the U-2. “The mission was beautiful, the aircraft was tough. I wore a pressure suit going above 70,000 feet. All of that was very appealing to me,” Tendesdal shared.

The Lockheed U-2 is actually nicknamed the “dragon lady” and used to be the aircraft of choice for the Central Intelligence Agency. Pilots are required to breathe in pure oxygen for the hour prior to takeoff and wear partially pressurized space suits before they board for missions over 10 hours long. It is so challenging and difficult that it comes with a suicide needle, should the pilot opt to take it. Tengesdal was only one of ten women in around 1100 pilots in the aircrafts history. She is still the only Black woman to fly it.

“I was driven toward a goal and flying. I didn’t say I wanted to be a first because no one else had done it, I didn’t even think of it that way. I looked at the U-2 community as a brother and sisterhood that I wanted to be a part of,” Tengesdal explained. “The progression of myself as a Black American during my time on this earth has been a very good one…I saw opportunity, my mom made sure there was and then I would take advantage of it.”

Her advice is to take everything as if it’s the only shot you have and make the best of it. “I try to create those opportunities for people regardless of what they look like or who they are, based on their skillset. I think that’s how I went through life. People saw something in me, I had the skill and aptitude and it’s worked out…All you have to do is look at it and not limit yourself,” Tengesdal shared.

“When I was deployed with the Navy, I saw what poverty could really look like. It gives you that perspective of ‘we don’t want that here,'” she explained. With her time in service, she’s witnessed how bad it can be and although recognizes America is far from perfect – it’s a beacon of hope for so many for a reason. Tengesdal remains hopeful that American resiliency will shine through.

Promoted to Colonel, she eventually retired in 2017. These days she’s wearing the hats of personal trainer, motivational speaker, wife and mom. She’s also fostering to adopt, in an attempt to give a child a starting opportunity, like she had.

We can also add reality TV star to the mix now, too.

You’ll find Tengesdal on the CBS reality series, Tough As Nails. It’s a show featuring every day Americans who don’t hesitate to roll up their sleeves and get the job done; a mantra deeply familiar to her. Things like mental toughness, strength, life skills and endurance will be tested. Basically, it was a show made for Tengesdal.

For a woman who’s accomplished so much already and continues to strive for even more, she has some shockingly normal hobbies and enjoyments. “I am above level 8,000 on candy crush and I play Pokemon go,” she laughed.

Her message to women or anyone who feels underserved wondering if they should go for something because it’s going to be too hard, Tengesdal says yes. “You may struggle and even struggle really hard. Do it anyway.”

For more amazing Black veterans, check out this post.