MIGHTY 25: Combat-wounded Bobby Henline uses comedy to heal the military community - We Are The Mighty 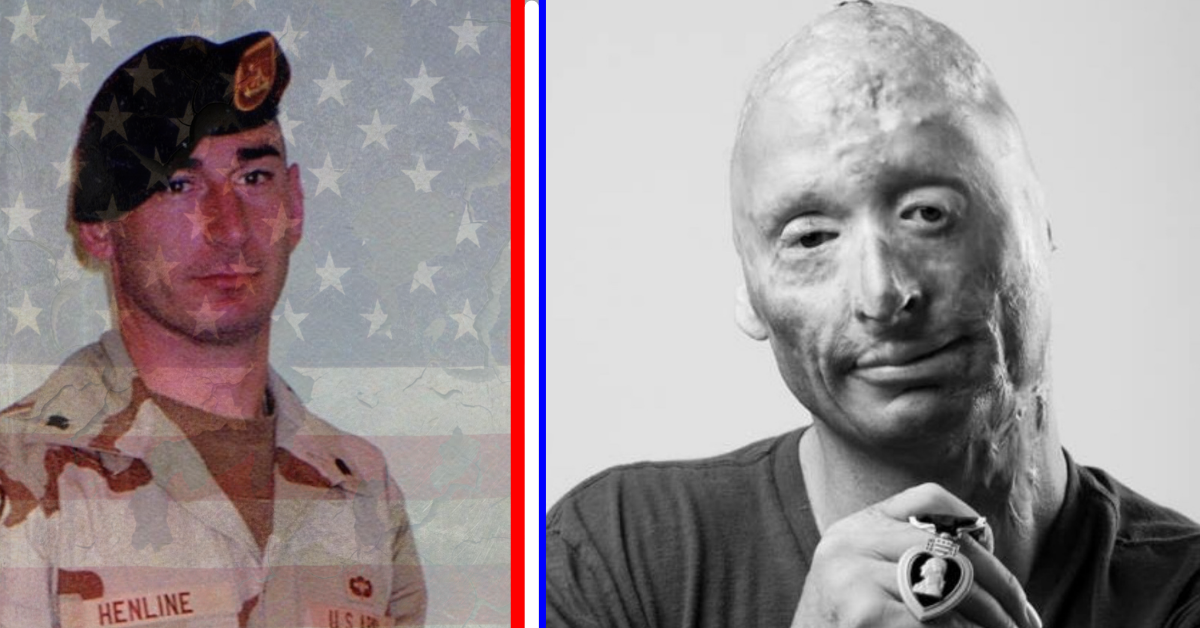 Comedian and retired Army Staff Sgt. Robert “Bobby” Henline always enjoyed humor. He never imagined it would bring him through some of the hardest days of his life but also become a beacon of hope for the military community, too.

“Growing up I was a Navy brat,” Henline shared. “The military was always around me with my grandfather, dad and step-dad serving in the Navy but I didn’t think it was for me. I was the entertainer who liked attention,” he laughed.

Henline found himself floundering after dropping out of high school. It was his uncle who’d encourage him to enlist at 17 as a way to right his path. The Army took him without a high school diploma or GED, knowing war was coming. “I did my three years in Desert Storm and found myself as a divorced, combat veteran at just 20 years old,” he said.

Ten years passed, Henline remarried and had children. Though the uniform was hung up in the closet, it wasn’t far from his mind. “I always felt like something was missing but my wife said she’d never be with anyone in the military,” Henline explained.

He was a 30-year-old veteran by then but he felt called to return and serve. “Mentally, the game was easier but physically it was a lot harder. I got through basic, went to jump school and then went on to Fort Bragg to serve in 2003 when I deployed to Iraq for the second time in my life,” Henline said.

After a year in the Middle East, he made it back and was stationed in Fort Carson, Colorado, for three months before he was deployed once again to Iraq, for another 13 months. He was sent back to Fort Bragg when he returned, but ended up back in Iraq only six months later.

It was the last time.

Though he knew injury or death was a possibility as a soldier, dark humor played a part in justifying how he’d want it to go. “You talked about once you were in the situation and when it was so in your face. You had to talk about it so you didn’t bottle it down and make it worse,” Henline explained.

Combat in Iraq during this time meant no armor or any of the technologically advanced protection of today’s warriors. On April 7, 2007, Henline’s Humvee hit an IED. Out of the five men in the vehicle, he was the only survivor.

Henline stumbled out, on fire and with burns covering 40% of his body. Despite an excruciating recovery, he never stopped using humor. “I did it automatically in the hospital just to let my family know I was still me,” he explained.

Despite his outward courage, he said he prayed God would take him during the first two years of healing. “I felt useless to my family. I feel like a burden and I had survivor’s guilt because I shouldn’t be here as the only survivor,” Henline said.

An occupational therapist challenged him to go to an open mic night, after hearing one of his singing ditties on repeat. Thirteen years later, he’s still using stand-up comedy to heal the military, first responder community and fellow burn survivors.

The COVID-19 pandemic ended live events, a severe blow to someone who not only helps others but receives healing by performing. But much to his surprise, Henline found another outlet in an unexpected place.

“I was stuck with myself — my own thoughts and craziness. I know those are the hardest times,” Henline shared. “I tried to do one of the lip sync things but it was terrible. Then I told one of my jokes and it just blew up.” He realized the opportunity to reach a broader audience had just been gifted to him, no longer limited to an event.

Though it’s been a long time since his injury, Henline is open about his own continued struggles with PTSD. A panic attack hit him while at Walmart recently. While trying to recover, a fan found him. Henline said he found himself internally laughing as he tried to recover while trying not to appear crazy.

“You may see me on stage telling jokes and having a great time but then I could need three days to hide out and recoup. I’m human,” he added.

“If I didn’t make it home, what would I want for the ones who did? And I know myself. Of course, I want them to live their life to the fullest — live their best life. You’re going to chase your dreams, do whatever it is. You need to feel your passion,” Henline explained. “I know it’s what they’d want for us. I try to remind other veterans how it’s really all we’ve got to do because we’re going to live for them. It’s how we’ll make it through this, together.”

To learn more about Forging Forward and supporting its mission of serving America’s heroes, click here.