MIGHTY 25: Zachary Bell is more than A (Marine) Veteran With a Sign - We Are The Mighty

MIGHTY 25: Zachary Bell is more than A (Marine) Veteran With a Sign 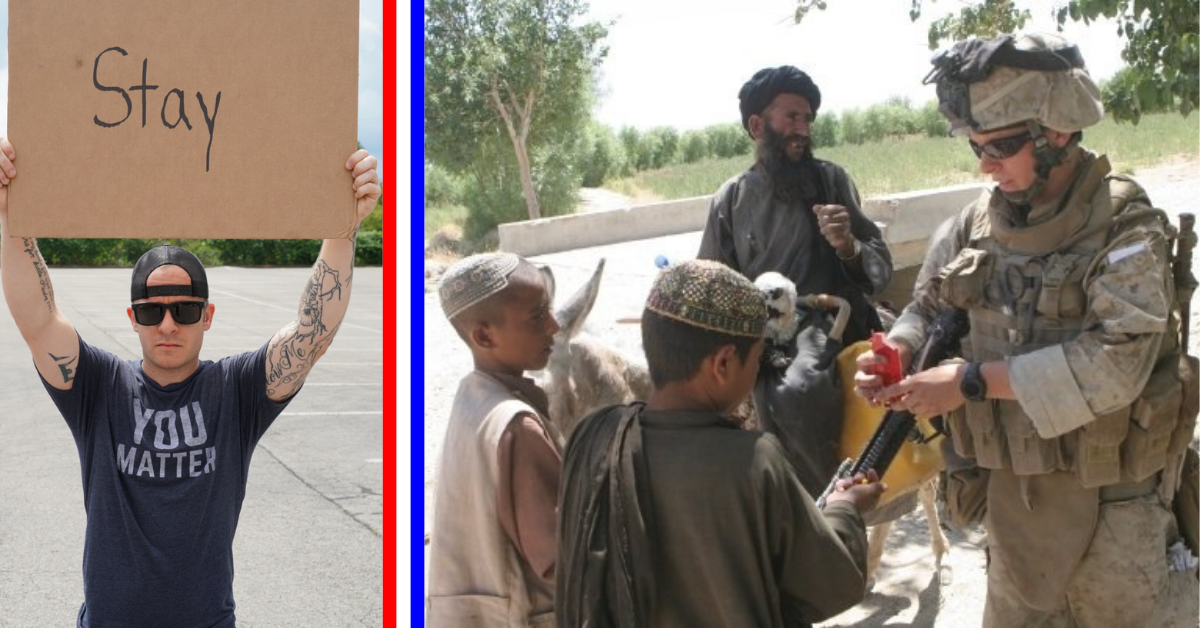 Marine veteran Zachary Bell originally enlisted in the Marine Corps because the uniform was hot and he thought war was cool. These days he serves weaponless. Well, unless you count his cardboard sign which has garnered a cult-like following.

It was 2007 when he made the decision to join the military. “I honestly didn’t like the Army’s uniforms at that time… it looked like a blind man’s version of what they thought the desert looked like, like they’re limestone in the desert. So, so, so sad,” he laughed.

Bell had no aspirations to be a pilot or end up on a ship, so the Air Force and Navy were out. He laughingly admitted he could never find a Coast Guard recruiter to talk to, so it was never in the running.

After turning down a $30,000 advancement to become a soldier, Bell opted for the Marine Corps. The surge in Afghanistan was mounting and he’d find himself in the thick of it all not long after basic training completed. “I wanted to fight in the war and I got what I wanted and then some. I was an 0311 infantry rifleman,” Bell explained.

He was assigned to 1st Battalion, 6th Marine Regiment based in Camp Lejeune, N.C. Though he started off at the bottom, soon he was leading a squad. “It was a lot of hard deployments and we lost a lot of people,” he said. “I had done everything I sought out to do in four years and I was ready to go. I had deployed twice with two small kids and a wife; it was time.”

Only nine months after he left, Bell lost his first fellow Marine to suicide. He wouldn’t be the last.

Despite thinking he was ready to take on the civilian world, it wasn’t as easy as Bell thought it would be. For one, he admits there was no real transition. Bell was working and going to school full-time two weeks after leaving the Marine Corps.

“I did that for five years until I graduated with a Master’s in Business Administration,” he shared. “It was humbling to a point, but then I was like, this is just a weakness that I have to work on.”

Bell actively sought out tutors for the subjects he needed help with as he worked his way through his master’s program. All the while, he was raising his family and working.

In 2017, he finally paused to take inventory. Bell wasn’t sleeping and began recognizing concerning behaviors. He found it difficult to accept the ever-present social nature of the co-working spaces he found himself in.

Though it wasn’t complete avoidance, Bell admits always having to mentally prepare for certain interactions. “It was just another moment where someone was going to eventually ask me about my tattoos in the military and then I was going to have to be emotionally responsible for their security throughout the entire interaction. It’s just not fun. It was no fun.”

It wasn’t just his tattoos, either. Questions about whether he killed anyone inevitably ended up in the interactions. “I’d done some writing for the New York Times and The Huffington Post for a few years. And as time goes on, I’ve noticed real differences between the military, veteran culture and the rest of the world. And just these outliers,” Bell explained.

At this point, he was seeing a culture and environment around mental health which he didn’t like. When the COVID-19 pandemic hit, Bell was laid off from his job. After seeing Dude With A Sign trending on social media, it sparked an idea.

“I’ve lost more people to war after war. And so this is my final mission,” he added.

“I was really kind of compelled by this idea of creating conversation, using a basic analog technology and trying to stimulate something out of it. And really, just low-level take people to therapy with me,” he explained

His version of therapy has resulted in hundreds of veterans privately messaging Bell to tell him how his post or posts stopped them from taking their lives. It’s a heavy responsibility but one Bell said he’s prepared to serve in.

Within the last year, Bell’s Veteran With A Sign platform following has skyrocketed across social media channels. His hopes for the future of the brand are simple, though. “I’d like for the page to be a place for anyone, of any walk of life, to talk about challenges and things they’ve overcome, or just a place where they can stand up and speak for whatever that may be,” he explained. “I kind of want everyone to be a part of the joke. If I start with the military veteran world and then the civilian world, then I can hopefully be the bridge we really need.”

Military members tend to gravitate towards humor and live for finding ways to make fun of the nuances which accompany the uniformed services. It’s a practice Bell himself enjoys, too. “I always say, how will you know I’m in the infantry? Just wait, I’ll tell you,” he laughed.

As for this self-proclaimed Marine grunt who went on to earn a Master’s degree and see success in both the corporate world and now the veteran advocacy space– what’s next?

“I’ve had the honor to lead at some of the highest levels and the greatest privilege of my life was doing it for Marines. I work really hard on my goals and It’s not super power but I like to think I use it for the good of what I’m doing,” Bell said. “At the end of the day, I really just want to be the person my daughters think I am.”