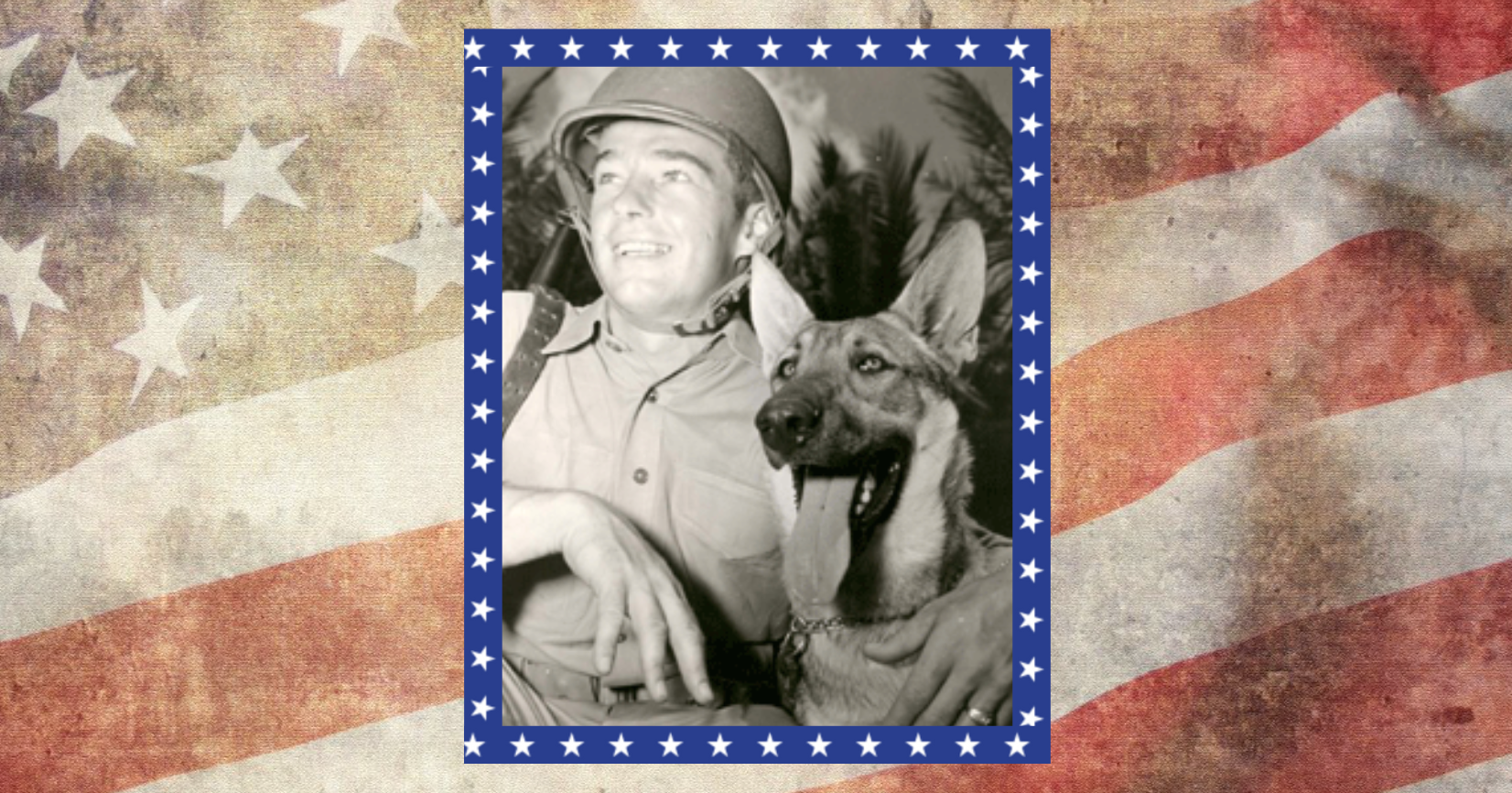 Military dogs see extensive use on the modern battlefield, especially with special operations. The concept goes back to Roman times where legionnaires fielded heavy Mastiffs with armored collars to attack an enemy’s legs and force them to lower their shields. In WWII, the United States Marine Corps decided to experiment with the use of dogs in the Pacific.

The Marine Corps University attributes the idea of using dogs in jungle warfare to a Marine Officer serving as a Garde d’Haiti in the 1920s. He trained a dog to work on his patrols to expose bandit ambushes. By 1935, the Smalls Wars Operation doctrine published by the Marine Corps Schools noted, “Dogs on Reconnaissance, – – Dogs have been employed to indicate the presence of a hidden enemy, particularly ambushes.” The concept was revived in 1942.

On November 26, 1942, the Commandant of the Marine Corps penned a letter to the Commanding General, Training Center, Fleet Marine Force, Marine Barracks, New River, North Carolina, which was redesignated Camp Lejeune the next month. In it, the Commandant dictated for the General to “inaugurate a training program for dogs for military employment when personnel and material become available.” At that time, 24 Marines were in dog-related training at other bases and would bring 42 Army dogs with them back to New River. The Commandant noted that a further 20 dogs would be procured by Miss Roslyn Terhune, given obedience training in Baltimore, Maryland, and shipped to New River around the end of January 1943.

The Marine Corps also received dogs from Dogs for Defense, Inc., the Doberman Pinscher Club of America, and even private citizens looking to help the war effort. Individual owners wrote to the Marine Corps and volunteered their animals on a donation basis. The Marine Corps’ standard for dogs was 1-5 years old, at least 25 inches high, and weighing a minimum of 50 pounds. Breed was of secondary importance to other attributes like obedience, but certain breeds stood out as more favorable. The most suitable breeds for the Marines were: German Shepherds, Belgian Sheepdogs, Doberman Pinschers, Collies (farm type, with medium length coat), Schnauzers (Giant), Airedale Terriers, Rottweilers, and positive crosses of these breeds. Eskimos, Malamutes, and Siberian Huskies were used exclusively as sledge or pack dogs.

In the early days of the war dog training program, Doberman Pinschers were held in high regard. Their short hair was believed to be more adaptable to the heat of the tropics and their keen senses and athletic ability made them excellent scout and messenger dogs. Moreover, the Marine Corps received the largest portion of donated dogs from the Doberman Pinscher Club of America. In fact, the majority of dogs that went overseas as part of the 1st War Dog Platoon were Dobermans.

Unlike the dog training programs of the Army, Navy, and Coast Guard, the Marine Corps dogs were trained exclusively for combat roles. Being a strictly combat organization, the Corps had no interest in training dogs unless they contributed directly to killing the enemy or saving Marines. This concept split the training program into scout dogs and messenger dogs. These specialized dogs would prove invaluable against the Japanese in the Pacific.

In addition to the Dobermans, German Shepherds were found to be adept at the war dog training. Both breeds were trained in scout or messenger roles. The training at Camp Lejeune took approximately 14 weeks and included regular exposure to small arms fire and explosions. Two Marines were assigned to each dog as a trainer and attendant. This trio formed a single dog unit. Throughout training, dogs and their handlers grew accustomed to each others mannerisms and personalities. Dogs alerted their handlers to potential threats in different ways like tugging at the leash or crouching, and handlers learned to recognize these signs. Similarly, dogs learned to be on alert when their handler put them on “watch” to be wary of potential threats. This close relationship was vital for the dog units to work effectively.

The first Marine Corps dog unit sent to the Pacific was the 1st Marine War Dog Platoon. Sailing from San Diego, California on June 23, 1943, the Marines and their dogs arrived in the South Pacific on July 11. In November, the platoon was attached to the 2d Marine Raider Regiment during the Bougainville operation. This was the war dogs’ trial by fire and they exceeded every expectation. The official report of the Commanding Officer, 2d Marine Raider Regiment (Provisional) states:

The War Dog Platoon had proven itself to be an unqualified
success and the use of dogs in combat was on trial. This first Marine War
Dog Platoon was admittedly an experimental unit and minor defects were
found that need to be remedied. But the latent possibilities of combat dog
units proved itself beyond any doubt. To prove this only a few of the feats
of the dogs need to be cited.

(1) On ‘D’ day Andy (a Doberman Pinscher) led ‘M’ Co.
all the way to the road block. He alerted scattered sniper
opposition and undoubtedly was the means of preventing
loss of life.

(2) On ‘D’ day Caesar (a German Shepherd) was the only
means of communication between ‘M’ Co. and Second
Battalion CP, carrying messages, overlays and captured
Jap papers. One’s’Plus 1, ‘M’ Co. ‘s telephone lines were
out and Caesar was again the only means of communication.
Caesar was wounded on the morning of ‘D’ plus 2 and had
to be carried back to Regimental CP on a stretcher, but he
had already established himself as a hero. While with ‘M’
Co. he made official runs between company and Battalion
CP, and on at least two of these runs he was under fire.

(3) Otto (a Doberman Pinscher) on ‘D’ plus 1 while
working ahead of the point of a reconnaissance patrol,
alerted the position of a machine gun nest and the patrol
had time to take cover with no casualties when the machine
gun began firing. Otto alerted the position at least one
hundred yards away.

(4) On ‘D’ plus 6 Jack (a German Shepherd) was shot in the
back but even though wounded carried the message back
from the company on the road block that the Japs had
struck and sent stretcher bearers immediately. This was
a vital message because the telephone lines had been cut.
One of Jack’s handlers, Wortman, was wounded at the same
time and thus Jack was the means of bringing help to
his master.

(5) On the night of ‘D’ plus 7 Rex (a Doberman Pinscher)
alerted the presence of Japs in the vicinity. At daybreak
of ‘D’ plus 8 the Japs attacked. This was not a surprise,
however, because the dog had already warned of their
presence.

(6) During the night of ‘D’ plus 7 Jack (a Doberman
Pinscher) frequently alerted a tree near ‘M’ Company
CP. When it became light enough in the morning Jack’s
handler pointed out the tree to a B.A.R. man near him.
A Jap sniper was shot down out of the tree. This sniper
was in a position to do real damage in the company C.P.,
but due to Jack, the sniper was eliminated.

(7) Night security is an intangible. Dogs on night security
have less chance to show spectacularly how they may
be the means of saving life. One fact stands out, and
that is that the troops have confidence in the dogs.

(8) From ‘D’ day until the Second and Third Battalions
were relieved from front line duty on ‘D’ plus 8, there
were dog squads with every company on the front line.

More instances could be cited but this should suffice to
show that the dogs have proven themselves as message carriers,
scouts, and vital night security; and were constantly employed
during the operation of securing and extending the beachhead.

The Bougainville report validated the war dog concept. Following it, the Marine Corps continually improved their war dog doctrine. The dogs saw further use in Guam, Peleliu, Iwo Kima, Okinawa, and even Saipan and the Japanese mainland. Today, the National War Dog Cemetery on Guam honors the service of these loyal animals. Fittingly, the Doberman sculpture that tops the memorial is titled “Always Faithful.”