What do military working dogs do? - We Are The Mighty

What do military working dogs do? 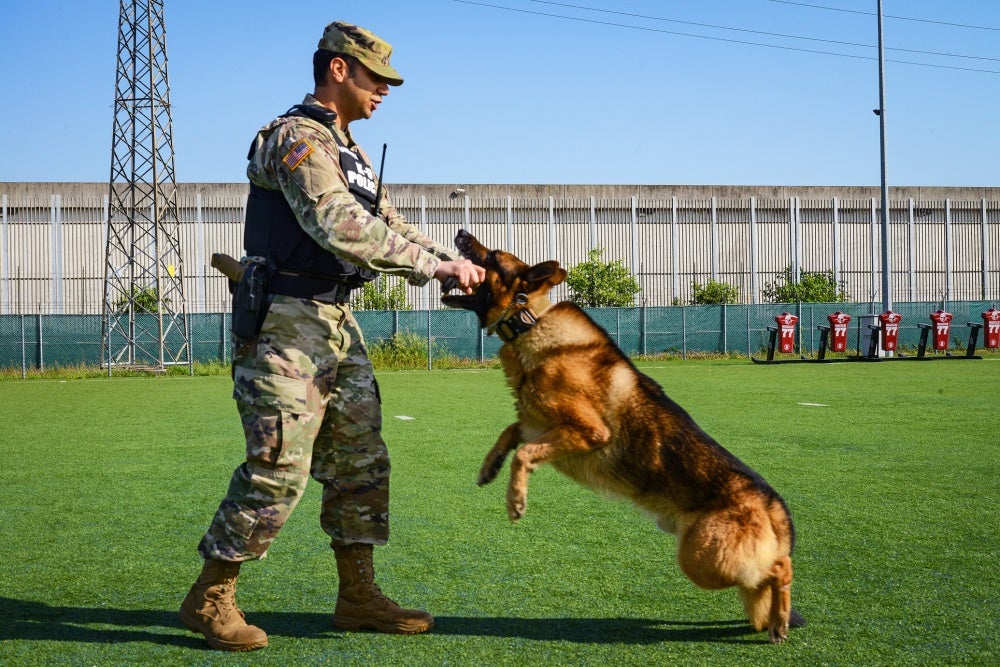 At least 14,000 years ago in one of the most fascinating (and adorable) evolutionary events, dogs diverged from their wolven ancestors. The details of the domestication process are still hazy, but the results have changed our relationship with dogs completely. Working dogs even save lives.

While most of us view dogs as lovable family pets, they’re much more than that. Dogs have much of the same biological advantages as their evolutionary predecessors, including intelligence and a remarkably keen sense of smell. They’re also highly trainable, making them perfect candidates for jobs that are beyond human capabilities- including jobs in the military.

Military working dogs have been serving the US for over 100 years.

In the earliest years of our country’s history, dogs were out on the battlefield alongside their companions. Come World War II, the first formally trained military working dogs were deployed- over 10,000 of them. They’ve played a role in every war since, with some studies estimating that more than 10,000 human lives were saved by working dogs in Vietnam.

Not all breeds are suited to being military working dogs.

No offense, but a Shih-Tzu is better designed to be a pillow than a working dog. Many breeds have been used over the years, including Dobermans, Boxers, Rottweilers, and different types of terrier. In recent years, the staple breeds have leaned towards German Shepherds, Dutch Shepherds, and Belgian Malinois. Why? These breeds are fiercely loyal, loving, and obedient, with an insanely powerful bite. Perfect.

These special pups take on several essential, life-saving roles in the field. These are some of the most common.

Trained to work silently, patrol dogs search for snipers and alert troops of possible ambushes. Having them around is a powerful deterrent to enemies. Because they’re so good at what they do, soldiers are often more at ease in their presence.

Sentry dogs are most often used to detect approaching enemies at night. The Coast Guard has even used them to alert ships of enemy submarine activity.

Messenger working dogs are trained to carry messages from one handler to the other. At times, they carry sensitive information through enemy territory, so they must travel as quietly as possible.

Bomb dogs start training when they’re just a year and a half old, and they’re practically made for the job. Their noses have 300 million olfactory receptors compared to just six million in humans, and over a third of their brain is used to process smells. These finely-tuned sniffers learn to detect the presence of dozens of chemical ingredients. When they recognize an ingredient, they’re trained to sit- can’t have a puppy pawing at TNT, can we?

The most heartwarming of all military working dogs are the ones who literally save lives. Their incredible sense of smell enables them to find injured soldiers in locations a human would never be able to guess. Armed with protective gear and tiny cameras, the dogs scout the scene to lead their human partners to critically injured companions.

After the terror attacks on September 11, 2001, over 300 search and rescue dogs helped out at ground zero. They sniffed out several injured civilians buried under feet of rubble. Rescue workers were so impressed by one dog that they saved his DNA. A few years later, they made five little casualty dog clones!

These dogs aren’t tools of the trade. They’re partners.

Ask any military dog handler, and they’ll tell you that working dogs are more than military assets. They work alongside their human companions with every bit as much loyalty and brotherhood as any other service member, except on four legs and with a much better schnoz. Their comparatively short lifespans make their devotion even more poignant; they truly dedicate most of their lives to saving ours.

They may not be able to read or speak, but they live up to their unofficial pledge with their actions:

“My eyes are your eyes. To watch and protect you and yours. My ears are your ears. To hear and detect evil minds in the dark.  My nose is your nose to scent the invader of your domain. And so you may live, my life is also yours.”