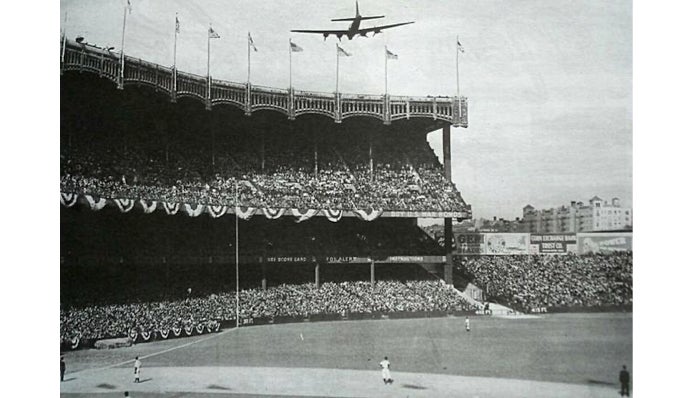 The 1986 classic Top Gun has put the idea of buzzing the air traffic control tower in the minds of many aviators. Such high-speed, low-altitude passes are extremely dangerous and violate every safety regulation in the book, it makes such occurrences the stuff of legend. Such was the case for four bomber pilots who found themselves flying over New York City during WWII.

On October 5, 1943, four B-17 Flying Fortress bombers were flying up to Maine before crossing the Atlantic to England after a training exercise in Florida. The lead bomber, “Thru Helen Hiwater,” was piloted by 2nd Lt. Jack W. Watson. Piloting the other three bombers were 2nd Lts. Robert Sheets, Elmer Young and Joseph Wheeler. The formation flew over the Hudson and headed up toward the Bronx.

At the same time, Game 1 of the 1943 World Series was underway at Yankee Stadium. It was the top of the eighth and the Yankees had the Cardinals down 4-2. “Let’s go down and take a closer look,” Watson radioed the flight as he led them in a shallow dive.

The bombers roared in over the stadium in a low pass from home plate to center field. “Look up at those glorious planes,” the New York WOR radio announced called out, breaking off his play-by-play of the game. “There they are, our brave boys off to fight the Hun!” The impromptu flyover was thought to be a scheduled demonstration of airpower and got the excited crowd on its feet.

The formation of B-17s climbed and circled the field. Watson, however, went back down to give the crowd an encore. This time, though, his bomber cleared the upper-deck flagpoles by just 25 feet. The Associated Press later reported, “an Army bomber roared over Yankee Stadium so low that Slats Marion could have fielded it.” Not everyone was pleased with the surprise flyover though.

New York Mayor Fiorello La Guardia was outraged by the dangerous stunt pulled by Watson and the other pilots. “That pilot should be properly disciplined, endangering the lives of the citizenry of New York in that manner,” he exclaimed. When the flight landed in Maine, all four pilots were confined to quarters to await a courtmartial. However, the need for bombers and trained crews in Europe was so great that they were released just a few days later. Each pilot was given a formal letter of reprimand and fined $75.

Watson went on to fly combat missions in Europe, including one particularly close call on January 11, 1944. His B-17 lost two engines on a bombing run by the time they were headed for home. Watson ordered his crew of nine to bail out over Holland. Tragically, four airmen landed in the water and drowned. Of the five who landed safely, four were captured and became POWs. Only one airman managed to evade capture and make it back to England. With just two engines, one of which was spewing flames, Watson skillfully landed his battered bomber in England. It took ground crews more than two hours to put out the fires.

Watson later took part in a radio interview where he brought up the Yankee Stadium incident. “I wonder whether Mayor La Guardia will forgive me,” Watson wondered.

La Guardia, a WWI Army pilot himself, heard Watson’s interview and sent a reply. “Delighted to get your message. All is forgiven. Congratulations. I hope you never run out of altitude. Happy landings. Will be seeing you soon,” he cabled. Watson completed his 35-mission tour in June 1944 and was promoted to Captain in December that same year.

Watson also sent a reply to La Guardia. “Thank you, Mr. Mayor, and it can’t be too soon for me,” he said. “We’d sort of like to go back together some day and drop in on the Rose Bowl game.”