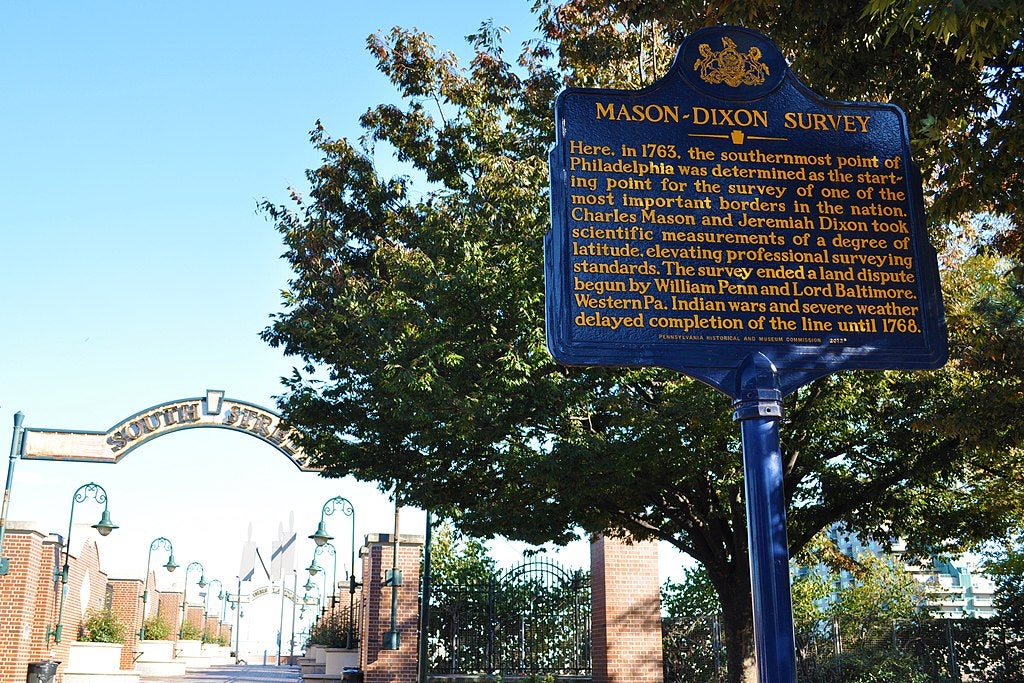 Borders and boundaries were critical during colonial times. The Mason-Dixon Line also referred to as the Mason and Dixon Line, is a boundary that defines the border between Delaware, Pennsylvania and Maryland.

When it was initially drawn, the boundary was referred to as the Missouri Compromise in the 1820s. During this time, people used the boundary to distinguish states where slavery was legal and states where it was not.

In the era of British colonialism, lands were allotted by the King to individuals or corporations via charters. Even so, the King would make errors while allocating land, which happened to bring about the Mason-Dixon line.

When the King allocated land to William Penn, a charter for land in America was initially allocated to Maryland and Delaware.

Impact of the King’s Error

On account of King Charles’s error, both colonial Pennsylvania and Maryland had legitimate claims to a large land area between the 39th and 40th parallels. Due to the conflicting claims, the Conjocular, also known as the Cresap War, emerged. The bloody war between the Calvert family of Maryland and the Penns of Pennsylvania lasted eight years, predominately in Philadelphia and the surrounding areas.

Eventually, the border violence between the colonial settlers became tiresome, and the British crown stepped in to restore peace. The British crown ordered Frederick Calvert, 6th Baron of Baltimore, to accept the 1732 agreement that renounced the Calvert claim to Delaware.

The Men Who Drew the Mason-Dixon Line

As part of the adherence to this royal command, the Penns and Calvert commissioned Charles Mason and Jeremiah Dixon to survey the boundaries. Mason and Dixon used some of the most advanced surveying tools of the day to explicitly establish the boundary between the two colonies.

Mason and Dixon used the stars to guide them to follow the line of latitude and an astronomical clock from England to establish the earth’s ellipticity. They had a traveling party of attendants, wagon drivers and axmen who assisted them to cut through the virgin forest.

The stones are engraved with the letter (M) on the Maryland side, while the Delaware and Pennsylvania sides have the letter (P) engraved in them. The steadfast boundary separated the Penns to the north and the Calverts to the south.

Importance of the Mason-Dixon Line

In the 1800s, Americans viewed the Mason-Dixon line as a boundary in the Civil War. It separated the southern and northern states from pro-slavery and anti-slavery, respectively. The boundary was of great significance to the African Americans as it represented freedom after escaping slavery in the southern states.

The Mason-Dixon line played a huge role in the underground railroad. Many enslaved African Americans tried to escape from the south and to the north. During their journey, they were able to identify the Stone markers that were erected every five miles along the Mason-Dixon Line. Whenever the enslaved African Americans saw the markers, they had a hope they had reached the beginning of their freedom.

Through the Mason and Dixon line, the two astronomer-mathematicians from England managed to end 87 years of disputes between the Penns and the Calverts. At the same time, it helped clarify the towns that we’re unaware of which colony they should pay their taxes to.

The Mason-Dixon line holds an important place in American history. It currently serves as a border to Maryland, Pennsylvania, West Virginia and Delaware and an exemplary boundary between Northern and Southern cultures.