This is how chocolate fueled victories after the first world war 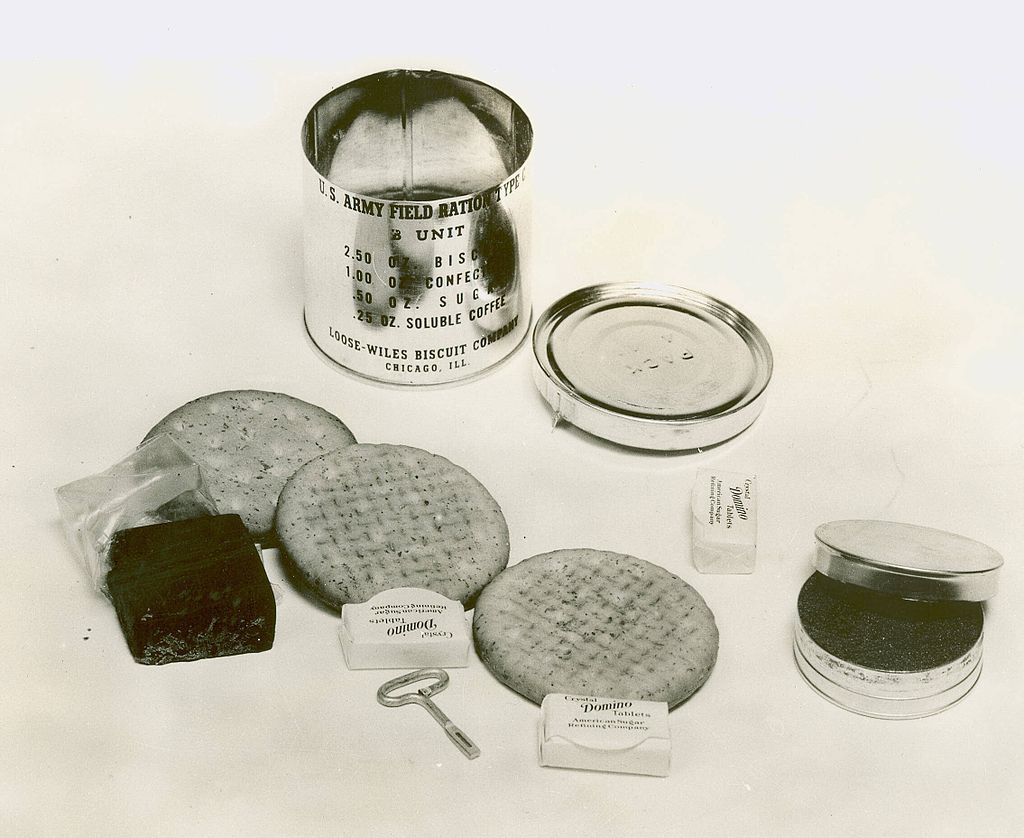 A 1941 C Ration B unit, with contents: 3 biscuits, cellophane wrapped chocolate fudge, 3 pressed sugar cubes, and a small tin of soluble (instant) coffee. Note the key included to open the accompanying A ration (the opening key for the B ration was soldered to the base of the can) Can label indicates contents and supplier: "2.50 oz Biscuit, 1.00 oz Confection, .50 oz Sugar, .25 oz Soluble Coffee Loose-Wiles Biscuit Company, Chicago Ill.".

Chocolates may appear quintessentially American, but their roots trace back to World War I when they were given to European soldiers. Soon after, the American soldiers followed suit, forming a sweet tooth among its Army boys that would be carried back home after the war. During the World War I era, thousands of producers emerged to meet the unending demands of chocolate bars, creating a boom brimming with elegantly named candy.

While the origins of chocolate consumption point to 4000 years back, today, it is mostly known as a central and south American delicacy and currency. In the ancient days, the United States recognized candy as a sweet treat and a valuable way to fuel army troops. By the time the Revolutionary war emerged, chocolate had not gained much fame among Americans.

It was even a favorite treat to George Washington and later became part of his Army’s rations. Undoubtedly, it was highly prized because of the high caffeine and sugar content, explaining the addiction some of us may have. Additionally, it was occasionally used as a payment to American troops in place of cash. Chocolate was a provision with tons of quick energy, which is why the military used it. While Joseph Fry created the first chocolate bar in 1847, it was not until the first World War that it became popular.

Similarly, the British military instituted chocolate bars for its soldiers to improve their morale and energy levels. New York’s Mayor sent a tin of the town’s confectioner chocolates to citizens in uniform, and in 1915, all the UK soldiers were gifted with famous “King George Chocolate Tins.” Like creamy candy and soda, chocolate was a good alternative to alcohol; hence the soldiers often fed on the bars to boost their mood. In the late 1920s, more than 40,000 different chocolates had been made in the United States.

When the candy bar boomed, almost every major city had several confectioners heightening the production of different types of candies and adding as many fillers as they could, including nougat, nuts and marshmallow. Since refrigerators and transportation equipment were scarce, regional brands dominated local markets, creating names that enticed the locals. In addition, there were only about seven total ingredients used in making chocolates, making it difficult for producers to differentiate their brands. Often, chocolate companies named their bars after pop culture icons.

One man known as Otto Schnering from the Curtiss Candy Company was able to market his brand uniquely. He had the guts to use the name of Baby Ruth, stating that he named it for the President’s daughter while amazingly taking advantage of the famous baseball legend Babe Ruth. Schnering was a master of marketing and pulled several other moves when he went to big cities like Chicago and Pittsburgh.

Afterward, when Americans had less disposable income for treats, some companies changed their strategies to advertise chocolate as a cheap meal replacement option. Essentially, chocolate bars became fast food in the depression era when people wanted more calories and quick energy. Unfortunately, many confectioners were forced out of business because of the high price of raw material goods such as sugar. With the emergence of World War II, shortages not only for chocolates but also for other foods became worse. The military ordered chocolate rations from most of the biggest producers in America, bringing an end to the regional boom. Chocolate was used to fuel victories in the first world war and the second as well. After World War II, improvements were made in manufacturing, refrigeration and transportation, channeling regional distribution.