How the election of 1876 was settled with a compromise 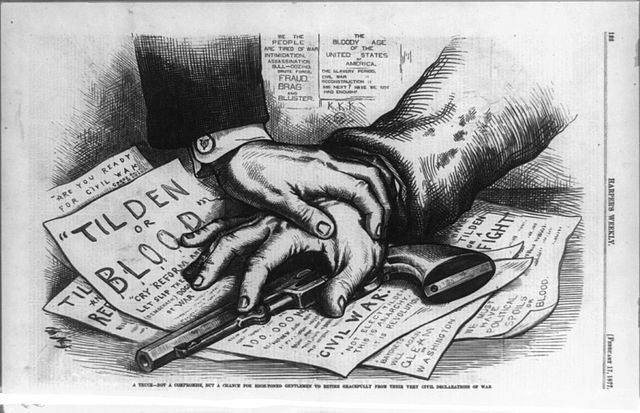 After the end of the Civil War, the U.S. was in a state of divide. Tensions lingered between the North and South, yet all remained under jurisdiction of a single force: the federal government. As Ulysses S. Grant chose not to run for a third term, officials began scrambling for presidential candidates to fill his shoes. The result became Rutherford B. Hayes (Republican) vs. Samuel J. Tilden (Democrat) in a “corrupt bargain” and controversial election.

Essentially, a true winner of the presidency could not be decided and it was left to a truce in order to determine the next Commander in Chief.

Three states in the South had an inaccurate vote count. (And possibly some Northern states, due to ongoing debates.) They sent in two totals, with either candidate winning the electoral votes. As either party couldn’t win without the votes being allocated, a special electoral commission was created by President Grant to settle the dispute. Eventually, the votes went to Rutherford B. Hayes, securing his spot as president. Of course, this upset his competition and earned him the nickname RutherFraud. The deal awarded Hayes the win by a single vote — 185 over 184, while Democratic candidate, Tilden, won the popular vote.

Known as a controversial, underground deal, the Compromise of 1877 was never listed on paper. Instead, it was an informal arrangement made between Congressmen. The deal listed that Hayes would earn the presidential votes, or rather, the Democrats would not dispute this fact, so long as he would end Reconstruction. (Among other things.) That meant removing federal troops from the remaining states they inhabited: Louisiana, Florida and South Carolina, despite their presence being important in the survival of Republican programs, and the safety of African Americans.

Essentially, it was an agreement for federal troops to stop interfering in Southern politics. This soon became a race issue, with violence taking place against blacks, and eventually, a series of laws to prevent them from voting through disenfranchisement. Through the deal, Southern states were to protect African Americans against violence, which largely went overlooked.

In exchange for the following, Democrats would peacefully hand the presidency over to Rutherford B. Hayes.

At least one Southern Democrat would be named to Hayes’ Cabinet; he made good on this deal when he appointed David M. Key, from Tennessee, as Postmaster General.

A transcontinental railroad was to be built with the Texas and Pacific Railroad Company, and was to be located within the South. However, the company went bankrupt the following year, as a bad hurricane season flooded their efforts in Louisiana.

Southern citizens had “the right to deal with black people without northern interference.” Despite reassurances that African Americans would be treated with respect, this widely led to violence and laws that revoked or blocked rights like voting and land ownership.

Not all politicians (or followers) got the memo and several Democrats were upset about the deal. However, sitting President Grant thwarted any signs of uprising.

To this day, the Compromise of 1877 is known as one of the most controversial elections in the U.S. The deal also effectively eliminated a Congressional filibuster and allowing the federal government to move forward with regular proceedings.