Today in military history: US and Soviets sign pact to destroy chemical weapons - We Are The Mighty

Today in military history: US and Soviets sign pact to destroy chemical weapons 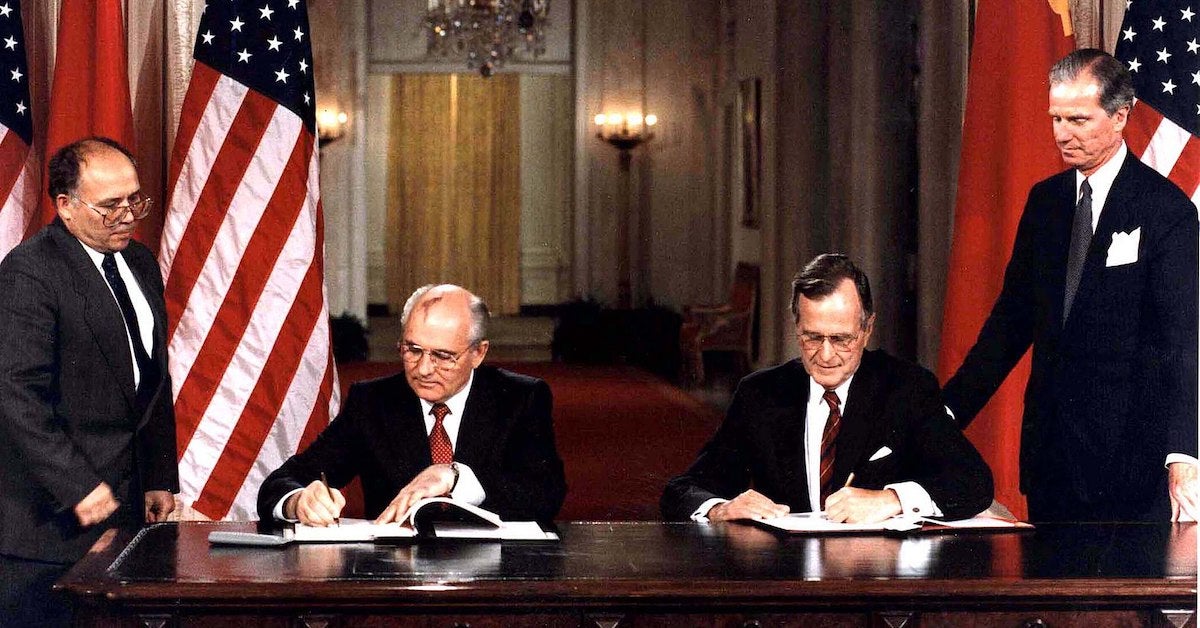 On June 1, 1990, the United States and the Soviet Union signed the Chemical Weapons Accord, where both nations agreed to begin the destruction of their sizable reserves of chemical weapons.

Under the leadership of President George H.W. Bush and Soviet leader Mikhail Gorbachev, the historic treaty called for an 80 percent reduction of their chemical weapon stockpiles under the oversight of inspectors from both countries. The agreement was intended to be the first step towards a global ban and by 1993, 150 other nations joined the superpowers to sign a comprehensive treaty banning chemical weapons.

“The modern use of chemical weapons began with World War I, when both sides to the conflict used poisonous gas to inflict agonizing suffering and to cause significant battlefield casualties. Such weapons basically consisted of well known commercial chemicals put into standard munitions such as grenades and artillery shells. Chlorine, phosgene (a choking agent) and mustard gas (which inflicts painful burns on the skin) were among the chemicals used. The results were indiscriminate and often devastating. Nearly 100,000 deaths resulted. Since World War I, chemical weapons have caused more than one million casualties globally.” — United Nations

In response to the devastating casualties, global entities signed the Geneva Protocol, which prohibited the use of chemical weapons in warfare but did not prohibit countries from creating chemical weapons or building their stockpiles of them. The Chemical Weapons Accord of 1990 was meant to begin to change that fact.

In 1993, the Chemical Weapons Convention (CWC) was opened for signature, banning chemical weapons and requiring their destruction within a specified period of time after entering into force on April 29, 1997. The CWC prohibits developing, producing, acquiring, stockpiling, or retaining chemical weapons; the direct or indirect transfer of chemical weapons; chemical weapons use or military preparation for use; assisting, encouraging, or inducing other states to engage in CWC-prohibited activity; and the use of riot control agents “as a method of warfare.”

The CWC is open to all nations and currently has 193 states-parties. Israel has signed but has yet to ratify the convention. Three states have neither signed nor ratified the convention (Egypt, North Korea and South Sudan).