Exclusive with Joe Cardona: Super Bowl Champion and Navy LT on Memorial Day, Patriots and of course - Army/Navy football - We Are The Mighty 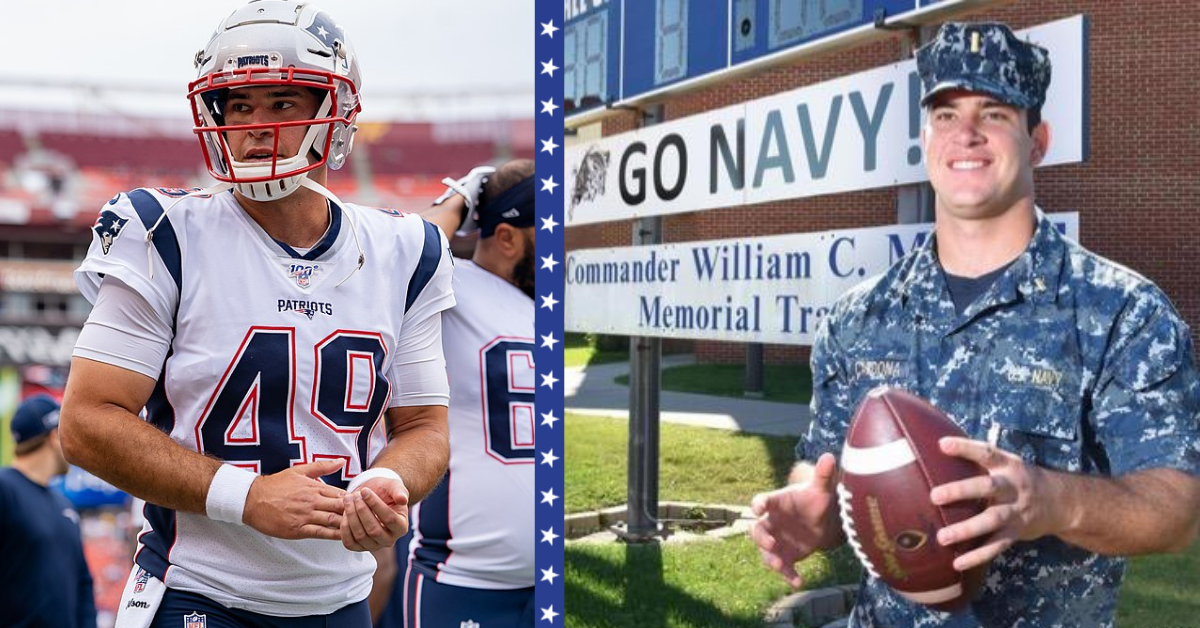 Joe Cardona is no stranger to being a leader both in the fleet and on the field. Joe is a two-time Super Bowl Champion who plays for the New England Patriots. He was drafted as a long snapper, which doesn’t happen often and established himself as one of the most consistent snappers in the NFL. He also has set an example as a leader in the Pats’ locker room. How was he able to do that? A lot had to do with his college experience: Joe is a Naval Academy graduate.

Cardona played for the Midshipmen and had a perfect career as a snapper which drew the eyes of plenty of NFL scouts. Playing in the NFL is tough, but Cardona also serves as a Lieutenant in the Navy.

Joe is partnering with USAA, during this Memorial Day to bring awareness to USAA’s digital tribute PoppyInMemory.com where people can pay homage to a lost service member.  We got a chance to sit down with Cardona and talk about honoring those who lost their lives, his career and a little football.

Tell me about this partnership with USAA and what it means to you?

It’s an honor to work with USAA to do a lot for service members. I am a member myself and it’s funny how that comes full circle. Poppyinmemory.com is pretty cool because it really highlights this history of remembrance with the red poppy that dates back to WWI. But now, as we enter the digital age, they have an opportunity to dedicate a poppy to a service member who made the ultimate sacrifice.

It’s an opportunity to highlight a loved one, whether it is a family member or friend, who made the sacrifice for our freedom.

The website itself is a great resource to honor members from every conflict back to WWI. Its pretty awesome and I am glad to be a part of it.

Most of us have someone close to us who has passed.  Whether it’s a teammate, mentor or friend we all lost someone. I had a buddy who died in an aviation accident, Lt Caleb King. I just reflect about him and his family and how much he and them sacrificed so much for all of us. And for others who have died in conflicts, even if it’s not in the forefront of our mind all the time.

I hope people will take time before you kick off a celebratory weekend to go to that veteran’s memorial or park. Stop by the memorial you walk by every single day, read the names on the memorial and reflect about them on a day like this.

Let’s talk about you a little bit. You’re a Naval Academy Grad, you were drafted right into the NFL as a long snapper. That doesn’t happen quite often. The USNA prepares you for military service and going into battle. Is there anything the academy did to prepare you for life in the NFL?

They are really good at preparing people to be excellent and every graduate wants to carry that tradition as an officer in the Navy or Marines.

They answer the call to serve but we all do it differently; in different paths both in and out of the service.

For me, having this opportunity that I never thought I would get, playing in the NFL provides that. I know I have to come every day and prove myself. But I also know I have to earn the privilege of leadership.

You were promoted on the 75th anniversary of D-Day and got your Super Bowl ring the same day. How surreal was that? That has to be one heck of an experience!

Being promoted to LT is something I will never forget. I got to do it in front of my teammates and coaches who invest a lot of time in me and with peers who I served with, were there as well.  For me it was awesome because it was both of my worlds coming together.  The celebration that followed was pretty great, getting presented a Super Bowl ring and all, so I can’t complain about that. But it was a good moment to bring together my two worlds of football and service.

Last question.  We asked this of David Robinson who went to the Naval Academy and Steve Cannon of the Falcons organization who went to West Point, so we have to ask you too. Who wins next year, Army or Navy and what does Navy need to do to get back into this fight?

I think Army-Navy this year, we are going to see a completely different set of circumstances. Navy had a down year, but they are hungry right now. They had a good spring camp. It reminds me of after my freshman year at the Academy and we were excited to go hit people so hopefully it’s the same for them.

This past year, Army got us on their home turf. But it will be a neutral site this year, so I hope we can go kick their ass.

In observance of Memorial Day this year, USAA is leading an effort to encourage Americans to offer a digital tribute to fallen military members by visiting PoppyInMemory.com.

On Memorial Day, America remembers those who gave their lives in military conflicts to protect the freedoms we enjoy. Since World War I, the red poppy flower has been a symbol of remembrance for the ultimate sacrifice made by more than 645,000 heroic men and women.