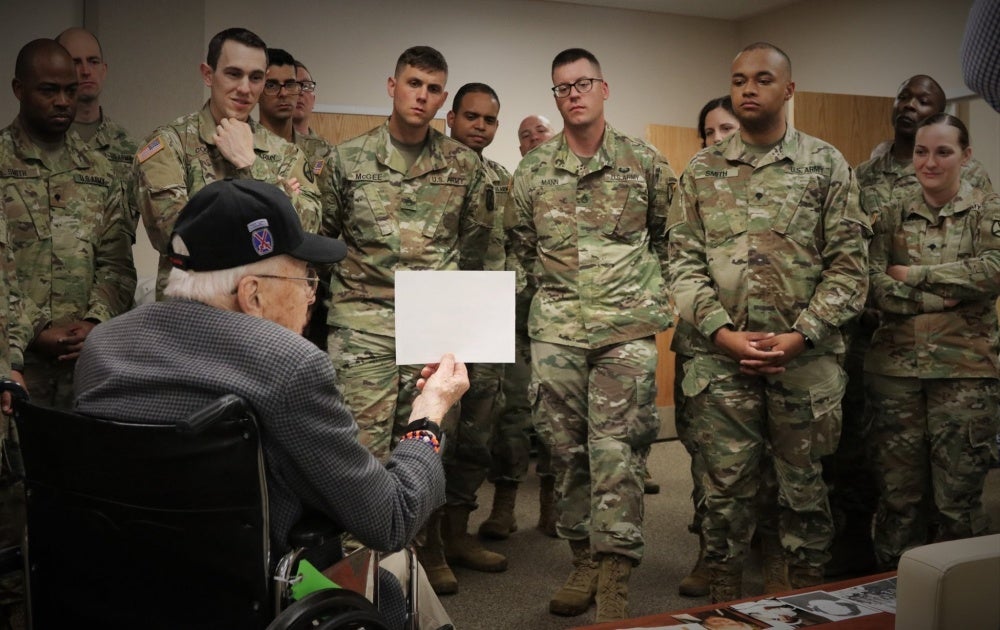 The Army’s legendary 10th Mountain Division was constituted as the 10th Light Division (Alpine) on July 10, 1943. Five days later, the division was activated at Camp Hale, Colorado. When the troops weren’t conducting specialized winter training, they often made up songs to entertain themselves around campfires and in the barracks. One of the most popular songs that spread across the division was “90 Pounds of Rucksack.”

Soldiers brought the song with them to Europe during WWII. Even after the war, it remained a popular tune for the legacy ski troops. “The original song is a huge part of the World War II generation – they sang it at all the 10th Mountain Division reunions and get-togethers,” said 10th Mountain Division and Fort Drum Museum director Sepp Scanlin. “There was even an album made of their ski songs during the war. The descendants group is also well familiar with the song from their fathers’ time at reunions and trips back to Italy.”

Soldiers of the 10th Mountain Division Band recorded a modern version of the classic song for the 21st century. The performance pays homage to 10th Mountain soldiers both past and present. The new lyrics and barbershop quartet arrangement are the work of Cpl. Nicholas Smith. “I had personally never arranged in this style before, but I was familiar enough with what it was so I only had to do a little bit of research and studying on it before getting to work on the arrangement,” Smith said. “I really enjoyed the process. It was a fun way to improve my skills in composition and arranging.”

“It exceeded my wildest expectations,” Scanlin said of the new version. “It kept the tune and the spirit of the original, but the new lyrics pay tribute to the WWII generation while still highlighting what it means to be a 10th Mountain Division Soldier today. They all did an incredible job.”

Two more videos are in the works. They will culminate with a concert later in 2021. “What we want to do with both the videos and the concert is to honor the spirit of the 10th Mountain Division, and bridge the gap between the proud lineage and service of those World War II Soldiers who served in the division and the modern light infantry Soldiers that are currently here,” said 10th Mountain Division Band public affairs NCO and trombone player Staff Sgt. Robert Carmical. “That’s a fundamental part of our mission – to capture the spirit of the fighting men and women who we serve and then share that with the community both on and off post.