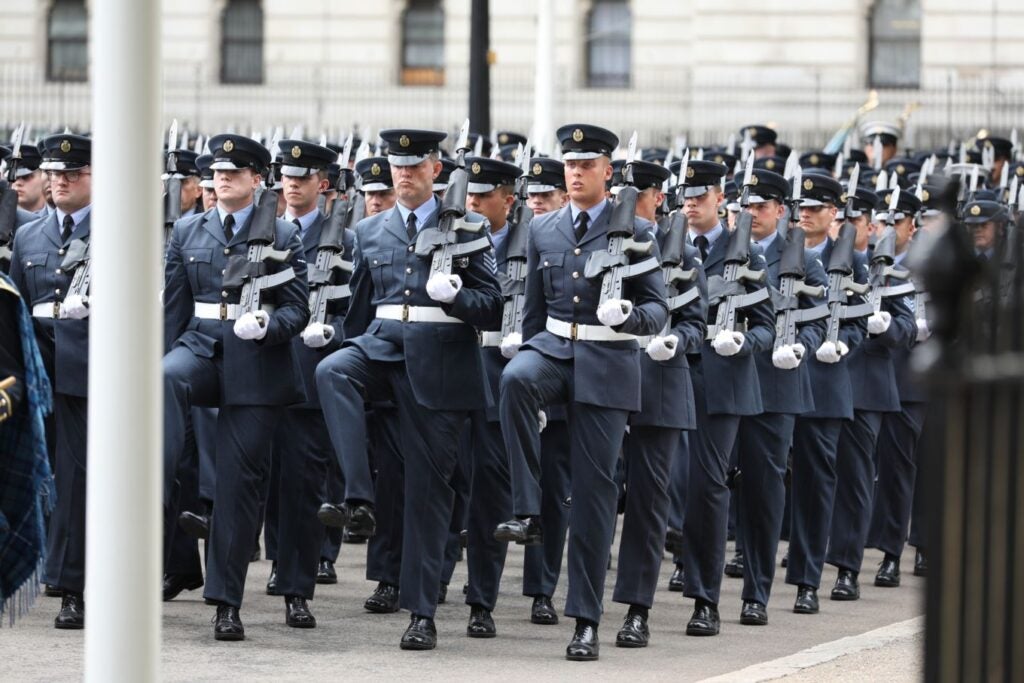 The current RAF uniform has seen incremental updates over the years while retaining its traditional appearance (RAF).

In September 2021, the US Space Force released their service dress uniform. Distinct from its Air Force origin, the Space Force uniform reflects the service’s Star Trek-esque Delta logo and looks like something from the world of science fiction. Across the pond, the British Royal Air Force is getting in on the sci-fi theme with their own uniform redesign.

An internal Ministry of Defence draft document revealed new utility and service dress uniforms for the RAF. The 15-page proposal noted that there was “need for a change” citing that the current uniform was last updated in the 1980s. It also critiqued the current uniform for being outdated, poor quality, and unsuitable for a modern fighting force. “The RAF has advanced significantly in many areas, but not this one,” the document stated.

A first draft of the proposed new uniform design was included in the document. The proposed utility uniform features a blue beret, blue cargo pants, an RAF belt, and black boots across its variations. Proposed tops include a utility shirt, utility 1/4 zip, utility polo, and long-sleeve smart utility shirt. Their appearances are similar between male and female variants, but tailored to suit the specific needs of the different genders. A GP jacket is also an option with the utility uniform

Meanwhile, draft images of the proposed service dress uniform appear slightly more traditional while still evoking a certain sci-fi aesthetic. Both male and female versions retain the beret from the utility uniform and feature a long-sleeve button-down shirt with collar and shoulder ranks. While both versions also utilize an RAF belt, the male uniform depicts trousers and shoes while the female version has a skirt and heels with an option for trousers and shoes.

The new uniforms have gained much attention on the internet with many likening them to fictitious uniforms like those found in Star Trek, Thunderbirds, and Starship Troopers. “We are in the very early stages of exploring possible changes to uniform to ensure it meets the requirements of our next generation Royal Air Force and are considering a number of options,” an RAF spokesperson said in a press release, “however, no decisions have been made.”