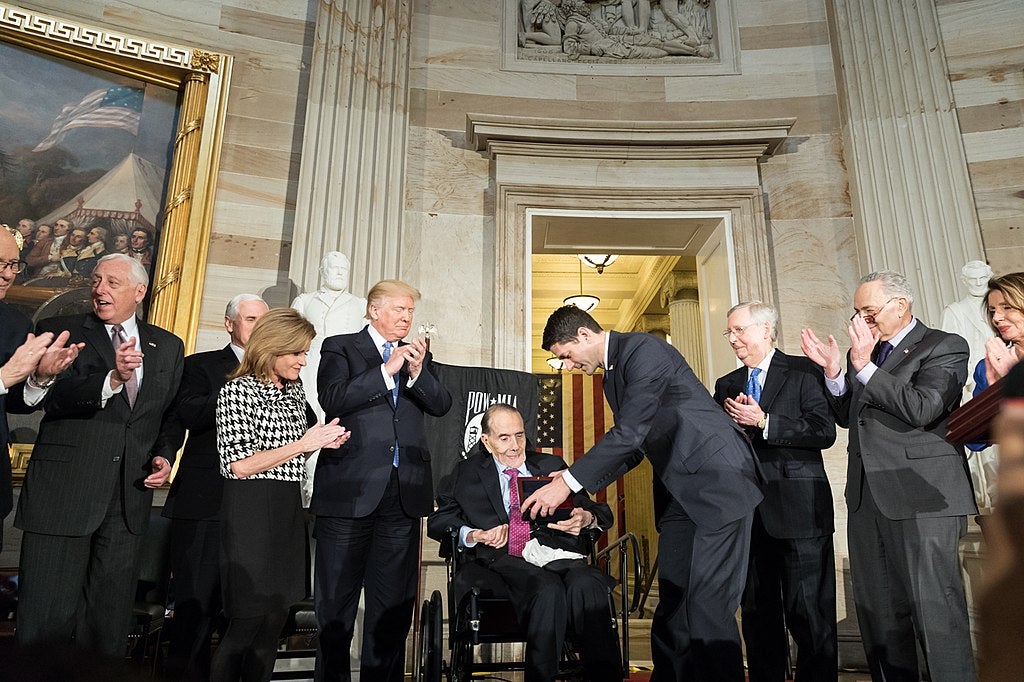 American politician Bob Dole recently passed away after battles with two forms of cancer. As a multi-decade Senate member, he was a beloved resident of Washington D.C. where he made many friends and influenced the masses in his 98 years of life.

Take a look at these lesser-known facts about this American favorite.

Dorothy and Toto, flat land, and the center of the country – Kansas is rarely remembered for its exciting feats. However, it’s the home state of Bob Dole. He was born and raised in rural western Kansas. He went on to represent the state in the House of Representatives and Senate until the mid-90s.

Dole was recognized for his abilities in multiple sports, including football, where he played as an end, track, and basketball. He was so skilled that he went on to play all three sports at the collegiate level.

Known for creating basketball coaching as we know it today, Forrest “Phog” Allen sought out Dole specifically for his basketball skills. Allen coached at Kansas University, where he went on to earn 24 conference championships and three national titles. Subsequently, this is where Dole enrolled in college. He attended from 1941-1942, until he enlisted in the Army Enlisted Reserve Corps.

While at KU, Dole also played football alongside legendary Bud Adams, who went on to found the Tennessee Titans.

Dole also joined the Kappa Sigma fraternity and was named the organization’s Man of the Year in 1970.

Dole left college to fight in the war. He became a second lieutenant in the 10th Mountain Division. He was deployed near Bologna, Italy when he was involved in direct German combat. He was hit with a bullet that shattered hi collarbone and part of his spine, leaving him unable to move.

After the bullet strike, Dole could not move. His fellow soldiers assumed he would die. They gave him as much morphine as they felt safe (so as to not cause an OD), and wrote a large M on his forehead with his own blood. This induced that pain meds had already been administered, avoiding another dose. Assuming he would succumb to his injuries, soldiers left him behind.

“I lay face down in the dirt,” Dole said. “I could not see or move my arms. I thought they were missing.”

Obviously, Dole didn’t die. Instead, he was placed in a body cast and brought back to the U.S. for treatment. He couldn’t move any of his extremities, and it was still believed that he would die. Or that if by a miracle he lived, he would remain paralyzed.

En route, he had blood clots, a fever of 108 degrees, and was given multiple doses of penicillin, which were unsuccessful. As a hail mary, he received a dose of an experimental drug (Streptomycin, now commonly used), and it cured his infection. Still paralyzed, Dole underwent a series of seven surgeries and three years of rehab to regain movement.

His right hand remained damaged; he often held a pen so people would not try and shake it. His left arm remained functional, but remained numb at times for the remainder of his life.

The same house that Dole grew up in in Russell, Kansas was used as his official address for the entirety of his political career, even after his parents passed away. The home is still a local landmark, now housing Dole’s elderly nephew and his wife.

Dole was involved in multiple presidential elections throughout his political career but never earned the right to work in the White House. He first ran as Vice Presidential candidate alongside Gerald Ford for his second term. Ford was defeated by Jimmy Carter.

During his time as the Senate majority leader, Dole had an impressive office in the Capitol building, including a balcony. He famously worked there often. Coworkers teased him for working on his tan. After Dole retired from politics, the Senate passed a resolution – unanimously – to name it the Bob Dole Balcony. He was known for scheduling meetings and even taking interviews on his favorite balcony.