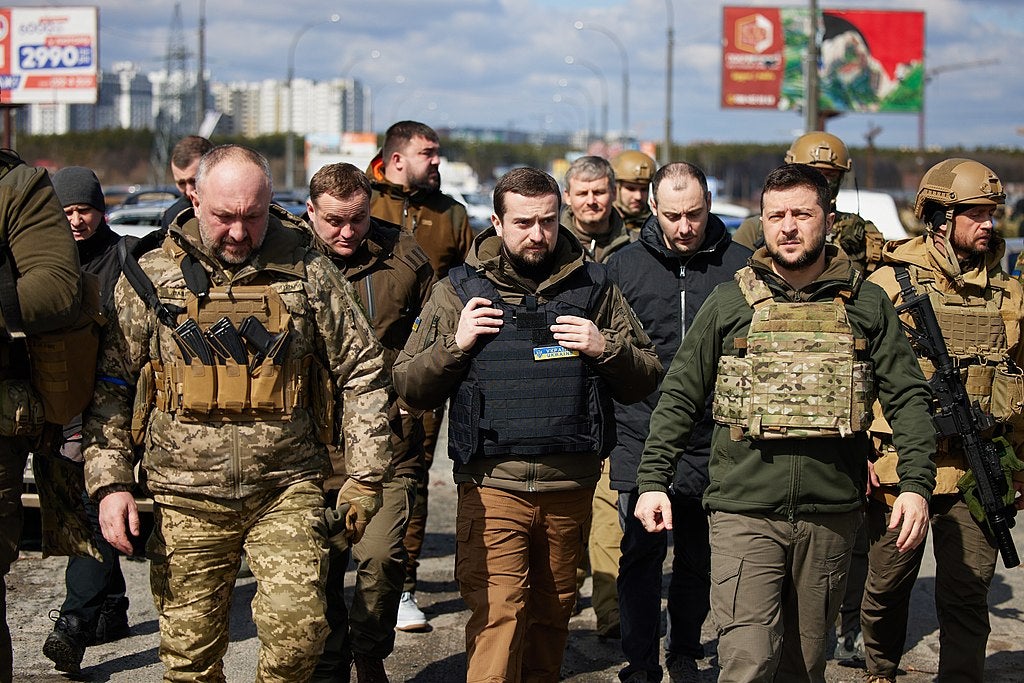 Working trip of the President of Ukraine to the Kyiv region, April 4, 2022.

The area around Kherson city of Ukraine has had to put a stop to a separatist poll, asking residents of the disputed territory if they want to join Russia. The reason for the stop is because Ukrainian forces are on the offensive against the Russian invasion and the recapture of the city seems imminent.

As of this writing, the Ukrainians had retaken four key villages in the region around the city, including important bridges used by the Russians in their initial invasion of the area. Russian defenses around Kherson have collapsed in multiple points, signaling a coming advance of Kherson city itself.

Ukrainian President Valodymyr Zalensky appeared on television in Ukraine, warning Russian troops that their only option was to “run away” and “go home,” because the Ukrainian armed forces would chase them all the way to the Russian border.

On Telegram, a secure social messaging app popular in that part of Eastern Europe, Oleksiy Arestovych warned the public that although the offensive was advancing, it would be a slow process – and that was by design. The point of the advance, he says, is to “grind the enemy.”

Arestovych went further in a video interview last month, adding that Ukrainian troops were already advancing across the Dnipro (Dnieper) River. The river has been an important terrain feature in battles throughout the military history of the region, from World War II, to the Napoleonic Wars and beyond.

Ukrainians were already hitting strategic crossing points of the river with artillery and small arms in an effort to halt Russian resupply missions. The assaults on Russian ferries and other river traffic will keep Russian reserve troops from joining battles in other disputed areas of Ukraine. A night assault near Kherson liberated the occupied villages of Novodmytrivka, Arkhanhel’s’ke, Tomyna Balka, and Pravdyne.

In typical Russian fashion, the Russian Defence Ministry claimed the Ukrainian operation near Kherson is happening but said the Ukrainian advances are a fabrication. It also says Ukrainian forces took heavy casualties in a failed operation.

Kherson was one of the first areas of Ukraine to fall into Russian occupation when Vladimir Putin ordered his invasion of Ukraine in February 2022. Other areas under Russian control rely on the Dniepro River crossings for supply and fresh troops. With Ukrainian forces in control of one of its banks, that job just got a lot more difficult.

American military planners predicted at the end of August that Ukrainian troops were shaping the battlefield for a major counteroffensive, hitting key areas, command and control facilities, ammunition dumps, and other strategic sites. After six months of fighting, Ukraine finally launched the counteroffensive in the first days of September.

Ukraine has been uncharacteristically quiet about its operations in Kherson, with reports coming primarily from international journalists embedded with Ukrainian forces. Nataliya Humeniuk, a spokeswoman for Ukraine’s southern military command, acknowledged that there is news from the offensive but will only be revealed at the end of the operation.

Aside from the strategic river crossings, the Kherson area is important because it is part of the Russian land bridge to the Crimean Peninsula, which Russia occupied and annexed in 2014. Without Russian control of Kherson, Russia will have to resupply the peninsula by sea.

“This process will not be very fast,” said Arestovych, whose official title is adviser to the head of the office of the President of Ukraine, “but will end with the installation of the Ukrainian flag over all the settlements of Ukraine.”

A faster or larger advance would risk overextending the Ukrainian supply lines, which are already limited. Ukraine says it’s an attrition strategy that intends to wear down Russian morale and supply capabilities – a “grind” with long-range artillery.