This is what the 'Eagle, Globe and Anchor' means to Marines - We Are The Mighty

This is what the ‘Eagle, Globe and Anchor’ means to Marines 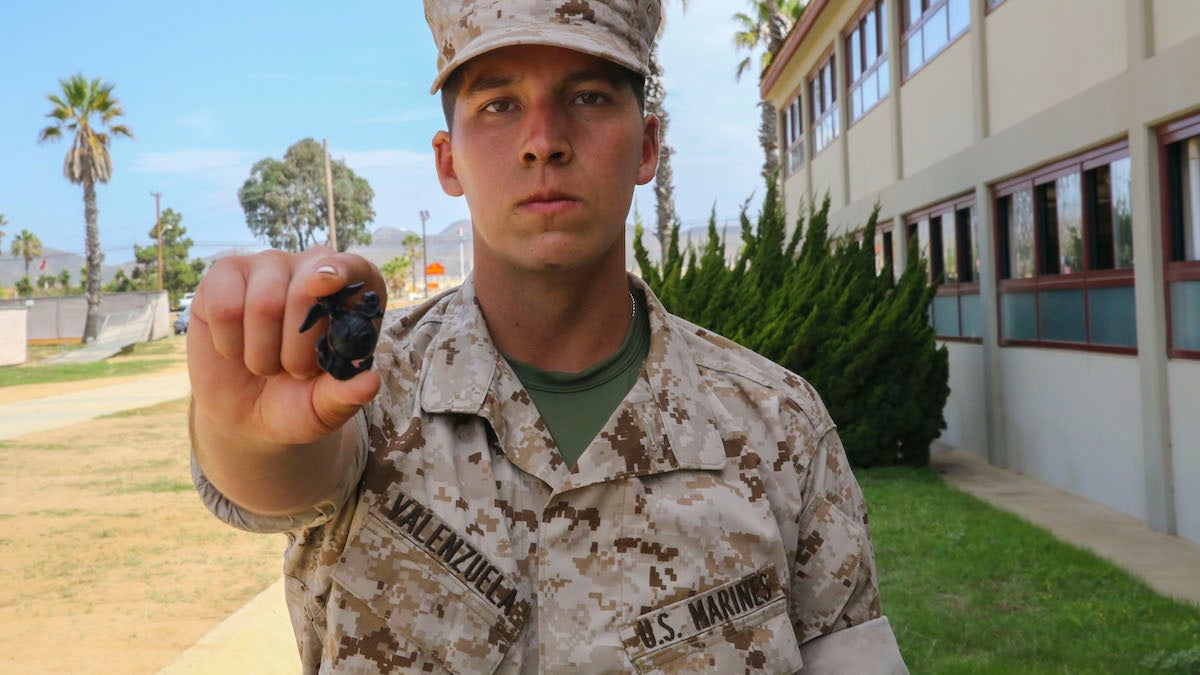 The Marines Corps is a war fighting organization and our colors fly the emblem of the Eagle, Globe and Anchor. Recruits earn the E.G.A. after experiencing the Crucible of training and the final test to identify as a Marine. There are no former Marines, once a Marine, always a Marine. Every new Marine shed a tear under the statue of Iwo Jima on Parris Island and other recruit training depots in the United States. Those who said they didn’t are lying. We grow old and crusty, but the pride never fades.

The American Bald Eagle represents service to our country via our national bird. In its beak it carries a streamer with Semper Fidelis, always faithful in Latin. The Marine Corps has a proud history of never taking up arms against the Capitol and are the President’s Fist in conflicts abroad. Marines love America and bleed red, white, and blue. If they weren’t clad in moto-gear when they were active duty, you can best your last dollar they have a tattoo, or a veteran hat stashed away in some footlocker at home with their uniforms and medals.

The Globe represents our area of operation – every clime and place. Marines are the tip of the spear regardless if the mission is humanitarian aid or to topple empires. Within 24 to 28 hours, America will have boots on the ground to deliver democracy and combat injustice, tyranny, or despair. As a result, Marine Expeditionary Units stationed in international waters tasked with the defense of our nation around the world. They protect every embassy and provide refuge to U.S. Citizens overseas in times of chaos.

The Anchor represents our maritime traditions dating back to the birth of the nation. It reminds us the marriage between the Marine Corps and the Navy as a department of the Navy. Jokingly also known as the men’s department by the infantry stationed on Navy ships. Regardless of the rivalry between the two branches, when it’s time to invade a threat to our national security, we pull together and get it done. The Corpsman is the anchor of a rifle squad, and if you call Doc a squid, we’ll give you a meritorious a** beating. Therefore, they’re part of the Fleet Marine Force and the only ones we consider one of our own.

The E.G.A. is sewed on top of our hearts on our camouflage uniforms

The Eagle, Globe and Anchor is sewn on our cammies because it was branded on our hearts during the fires of the Crucible. We’re a brotherhood. It doesn’t matter what color you are, gay or straight, what’s between your legs, or what name you call God. In a Marine Corps infantry battalion, the only thing that matters is that you carry your own weight, fire straight, and take care of the person to your left and your right. Our branch is small relative to the size of the other branches. We don’t need everyone. We need the few, the proud, the Marines. Semper Fidelis.