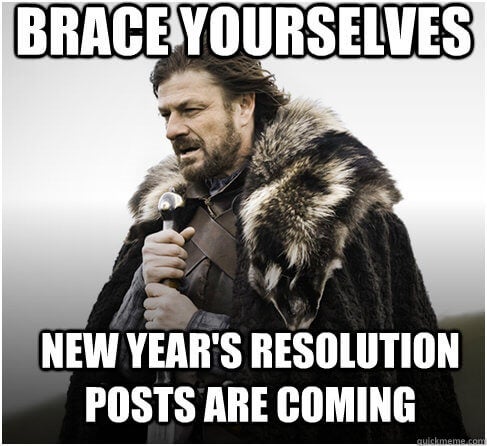 Although it isn’t a stretch to assume the entire world is glad to see the end of 2020, many of us will still find ourselves annoyed as we watch our friends and family share their resolutions for the new year. It isn’t because we are mean-spirited and don’t want them to succeed, either. There are just certain resolutions that make their way onto lists every January which cause the eye-rolling. In true WATM fashion, we felt that memes could more adequately demonstrate responses to many of these over-used resolutions.

Listen, we aren’t trying to be negative but exercising more is literally always a thing. For those who’s gyms aren’t closed it’s inevitable that you’ll see it fill in January and then slowly but surely go back to normal by March. Everyone makes this resolutions with great intentions but very few will actually follow through with it.

Eating healthy is a admirable resolution. The problem is that people tend to go balls to the wall and cut out everything, setting themselves up for failure. Day one always goes well, as the meme suggests. It’s day three, four and five that are the problem. Sustaining crazy diets just isn’t feasible and truly isn’t healthy either. Word to the wise: eliminate the word diet from your resolution.

Procrastinators everywhere have this one on their list. There are studies that have suggested procrastination has tripled in the last 30 years. Rather than making a blanket goal to never procrastinate (a failure just waiting to happen) re-frame this resolution to be about organization. By creating the space and time for the things on your to-do lists, they become more obtainable. Create reasonable due dates, putting the reins of control in your hands.

Listen, we are still in the middle of a pandemic. Reducing your stress is a noble goal but the reality is we are all going to continue to suffer from stress. It’s how you manage it that is the point. Re-frame this basically unobtainable resolution to be “implement self-care”. Life stressors are waiting for you in 2021, but if you have positive coping tools in your tool-belt to combat them, you’ll make it through.

Traveling more always makes it to the top of the list of resolutions, but this meme is more of the real reality we are facing in 2021. Sorry friend!

Day one of quarantine had everyone planting liberty gardens and making homemade bread. Day 90 had DoorDash and UberEats apps downloaded to your phone. PS: using a restaurant delivery service doesn’t really count for this goal. Just saying.

This meme is on point! But for real, this is a resolution you can actually accomplish right now. Many of us have endless extra time to devote to learning a new skill, so stop procrastinating (also a resolution) and do it!

Literally. We’ve all seen the epic videos of people walking and smart-phoning, they don’t end well. Although this goal tends to be at on the list of most stated resolutions, follow-through is low. Instead, make it measurable and obtainable. Leave your phone in another room during mealtimes for one. Get to know the humans in your quarantine bubble with you instead. Ya know, your family?

Americans are sleeping less. One in three adults aren’t getting enough sleep, according to the CDC. Since this study was done in 2016 and we don’t yet have 2020 numbers, it’s pretty safe to say that its the same or higher due to the stress or endless nighttime YouTube video scrolling.

We saved this goodie for last for a reason. It’s always on the list. This goal ends up being a failure for so many because it’s too big and broad. Be realistic! Reduce your latte ordering to twice a month, get rid of a few streaming services and only order food for delivery once a week. You’ll save $100 a month easily! There will still be plenty of shows and movies to watch while you are procrastinating to keep busy not being busy. Make your own fancy coffee and snackies (saving money and learning a new thing, two resolutions in one!).

As you dive into your 2021 New Year’s resolutions, just remember there’s someone just waiting to make a meme about it. Choose wisely.