Here’s how to remember Navy ranks and insignia 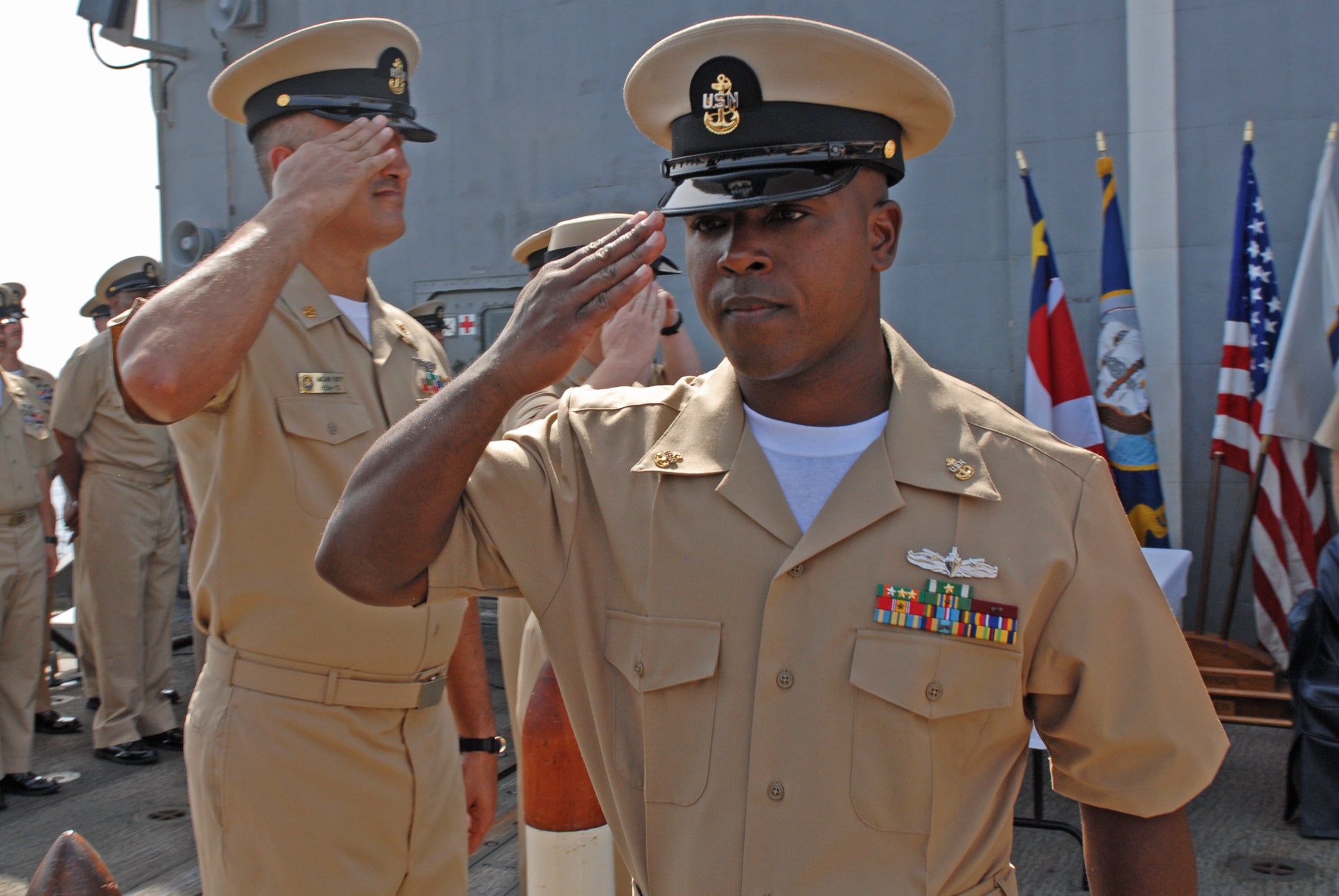 Understanding Navy ranks and insignia can feel a lot like understanding their uniforms. It can all feel so confusing. The easiest way to remember it is this: A Sailor’s number and letter represent their rank and title. It also tells you their pay grade. Sailors, like Soldiers, Marines, and Airmen, wear insignia on their uniforms. This clues you into their rank. Ranks correspond to the level of responsibility and the type of job a Sailor has. Speaking of Navy uniforms, here’s the complete hater’s guide to the Navy.

So, if you’ve ever struggled with figuring out if the person you’re talking to is a Seaman Apprentice or a Petty Officer First Class, then this post is for you.

There are four categories of Navy ranks. Enlisted Sailors are those who sign a contract to join the Navy. Warrant officers are enlisted Sailors who attend a specific career track to become experts in their field. Commissioned officers have a college degree, and admirals are senior officers.

E1 Seaman Recruit (SR) There’s no associated insignia for this rank. Seaman recruits learn the culture of the Navy and the basic skills you’ll need to be successful.

E3 Seaman (SN) This promotions means a Sailor not only knows their career rating, but you have a lot more responsibility, too. By this rank, you should understand the basic duties of your job. The associated insignia is two diagonal lines.

E4 Petty Officer Third Class (PO3) In this rank, you’ll continue to develop your technical and leadership skills. There’s a third diagonal line on this rank.

E6 Petty Officer First Class (PO1) As a PO1, your job is to mentor junior NCOs and lead teams of five to 50 Sailors. An additional chevron is added to your rank insignia.

E7 Chief Petty Officer (CPO) CPOs are the most junior Navy senior NCO rank. In this role, you’ll have more authority and responsibility. You’ll also handle personnel and equipment issues. This is the last rank that uses red chevrons.

E8 Senior Chief Petty Officer (SCPO) As an SCPO, this rank serves as a department chief. Sometimes you might also be a master chief. Either way, you’ll be relied on for your technical supervision. The rank insignia here uses yellow chevrons.

E9 Master Chief Petty Officer (MCPO) In this role, you’re the department chief and will be responsible for maintaining communication among the petty officers. A star is added to the rank insignia for E9s.

E9 Command Master Chief Petty Officer (CMC) Another E9 rank, the command master chief petty officer is the chief of a boat or a submarine. They’re the liaison between the enlisted Sailors and commanding officers. This Navy rank carries two stars as opposed to the MCPO rank.

The Chief of Naval Operations CNO appoints a Master Chief Petty Officer of the Navy (MCPON) to serve for two years. The MCPON is the senior advisor to the CNO.

In the Navy, as in all branches, warrant officers are considered experts in their field. Sailors need at least 14 years of experience to apply to the WO program. Warrant officers can be division or commanding officers. While deployed, they oversee equipment maintenance and repair.

CWO1 Chief Warrant Officer 1 (CWO1) After being phased out for several decades, the Navy is now appointing chief warrant officers who are all part of cyber warfare initiatives.

CWO2 – CWO5 maneuvers through various schooling, including officer development school, in order to achieve a level of expertise in their rating field.

Navy officers are grouped into two categories. After a Sailor has achieved an O6 rank, they’re moved on to the Admiral distinction of military service.

O1 Ensign (ENS) Graduates from naval officer training wear the ensign insignia. This very junior officer rank either continues on with additional schooling or serves as a fleet ensign.

O2 Lieutenant Junior Grade (LTJG) This is the second junior officer Navy rank. In this role, an officer leads a team and maintains this role for about two years.

O4 Lieutenant Commander (LCDR) A lieutenant commander is a middle-of-the-road officer Navy rank. Roles vary based on the needs of the Navy but might include commanding smaller ships.

O5 Commander (CDR) As a commander, this officer helps fill senior leadership roles either at sea or on shore.

O7 Rear Admiral Lower Half (RDML) As a one-star admiral, this Navy rank is responsible for commanding major sea or shore operations.

O10 Admiral (ADM) This is the highest Navy rank. Admirals serve in special appointments, such as the Chief of Naval Operations or as the commanders of regional fleets.

Fleet Admiral (FADM) is a wartime rank that’s only temporary. These admirals wear five stars, and to date, there have only been four Fleet Admirals in the entire history of the Navy. The last Fleet Admiral was William F. Halsey, Jr. Read more about Halsey’s remarkable career here.

How do you address Navy ranks?

Navy ranks are addressed by rank and last name.

What’s the lowest rank in the Navy?

The lowest officer rank is ensign, and the lowest enlisted rank is seaman recruit.

What rank is a Navy SEAL?

Most SEALs are E4s to E9s. SEAL officer ranks range from O1-O10.

How do you rank up fast in the Navy?

As with all DoD branches, ranking up has much to do with the effort you put forth and the work you’re willing to do. Want to find out more? Speak with a recruiter today.