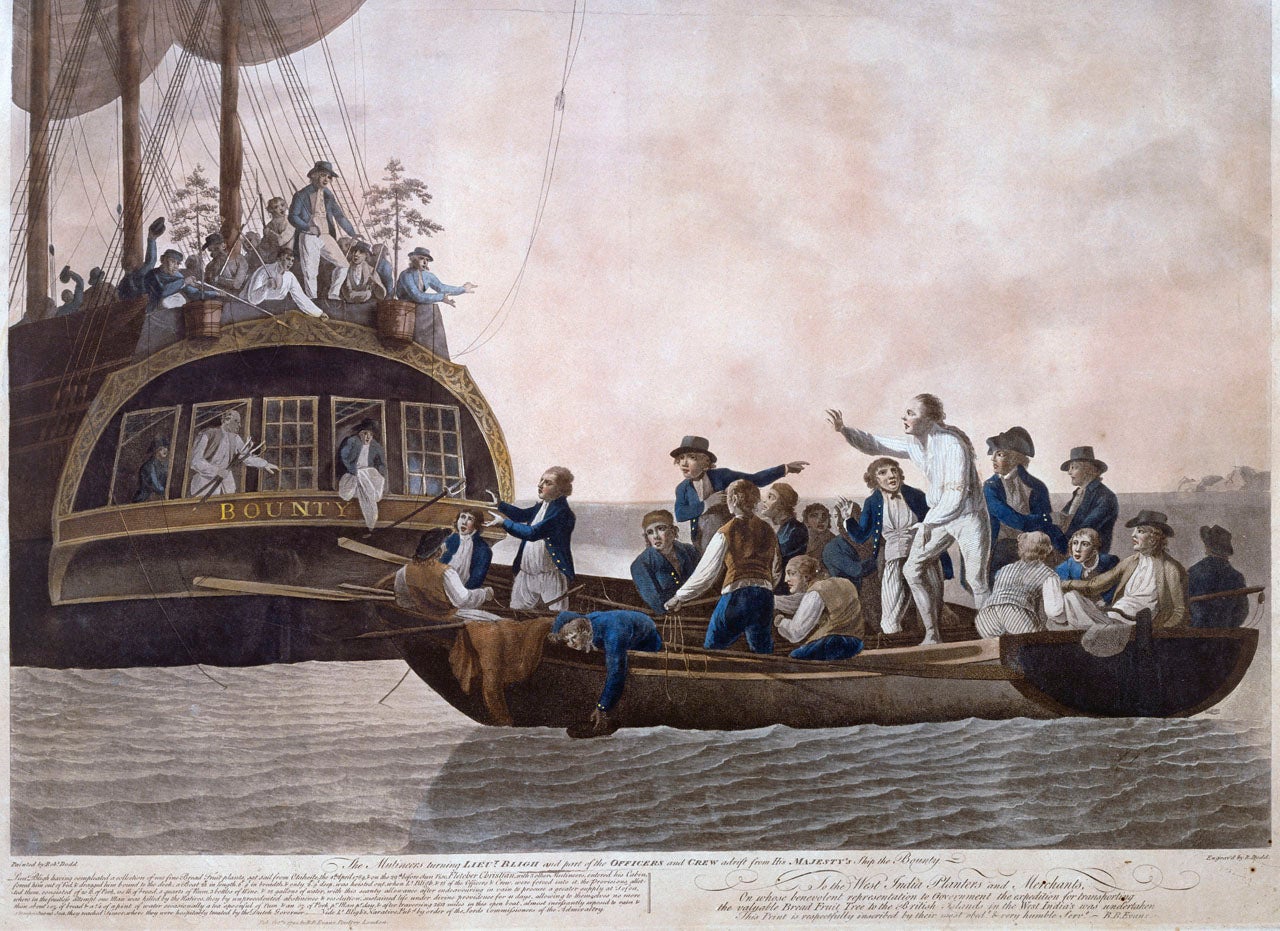 The Mutineers turning Lt Bligh and part of the Officers and Crew adrift from His Majesty's Ship the Bounty, 29th April 1789. (Wikimedia Commons).

The story goes that captain of the Royal Navy’s HMS Bounty, Lt. William Bligh, was a harsh captain, prone to giving out abuse and unfair punishment in an already-harsh environment. The officers and men had enough one day and set Bligh to sea aboard a rowboat, only to land in the Polynesian islands and live happily ever after, free from the sweat and toil aboard a British ship.

Lt. Bligh was an accomplished sailor, having traveled around the world on Capt. James Cook’s third circumnavigation of the globe. Bligh served as the ship’s chief navigator, called the sailing master. Bligh paid attention to how Cook kept his men alive along the long voyage, paying particular attention to the quality of the food aboard the ship and its cleanliness. He never took a risk with the safety of his crew, even turning around when Cape Horn proved too treacherous to pass, and sailing the Cape of Good Hope instead.

On land, he gave his crew ample time to rest, recuperate and replenish their stores. He had hoped the entire voyage would pass without a disciplinary action, and for much of the longest parts of the voyage, that was the case. Bligh was not just the ship’s captain, he was also the purser and managed a few other parts of the voyage. He even took a huge pay cut from his regular work as a merchant seaman to make the voyage.

The handful of troublemakers aboard the ship on their way to Tahiti were still relatively light but laid the foundations for a much bigger problem. Chief among them was the surgeon, Huggan. A drunk, Huggan bled a sailor to death while treating him for asthma, but told the captain (and thus the crew) the man died of scurvy. As captain and purser, Bligh took this very seriously.

Bligh not only paid Fletcher Christian (the man who would lead the mutineers) when he didn’t have to, Bligh lent him money when he needed it while aboard the ship. When the crew finally reached Tahiti to acquire the breadfruit for their mission, Bligh made them work only light duty while enjoying their time on the island. So why did the men mutiny?

Once landed in Tahiti, the men had their way with the island’s women for months. Bligh didn’t bat an eye at this behavior until the men and officers began slacking in their duties. Many contracted sexually-transmitted diseases and Huggan drank himself to death. Equipment began to disappear, and discipline was slipping away. Bligh used the Royal Navy’s punishment system to maximum effect in an effort to reestablish it. Sailors even began to desert.

After five months, it was time to leave, but the men didn’t want to go. Once at sea, Bligh reinstated the disciplinary actions to an almost-paranoid degree. He would routinely embarrass the officers and men, especially Fletcher Christian. Everything came to a head when someone stole from the Captain’s coconut supply, for which they were punished by the book. That’s when they mutinied. They put Bligh on the ship’s launch along with 18 loyal men – two others wanted to go but couldn’t be spared in the operation of the ship.

With Bligh gone, they returned to Tahiti while some went to Tubuai the Pitcairn Islands. Bligh and his men, using the rations afforded to them by the mutineers, made their way 3,500 nautical miles to the Dutch colony of Kupang, where he informed the Admiralty of the mutiny.