5 best retorts when asked inappropriate questions about your Purple Heart 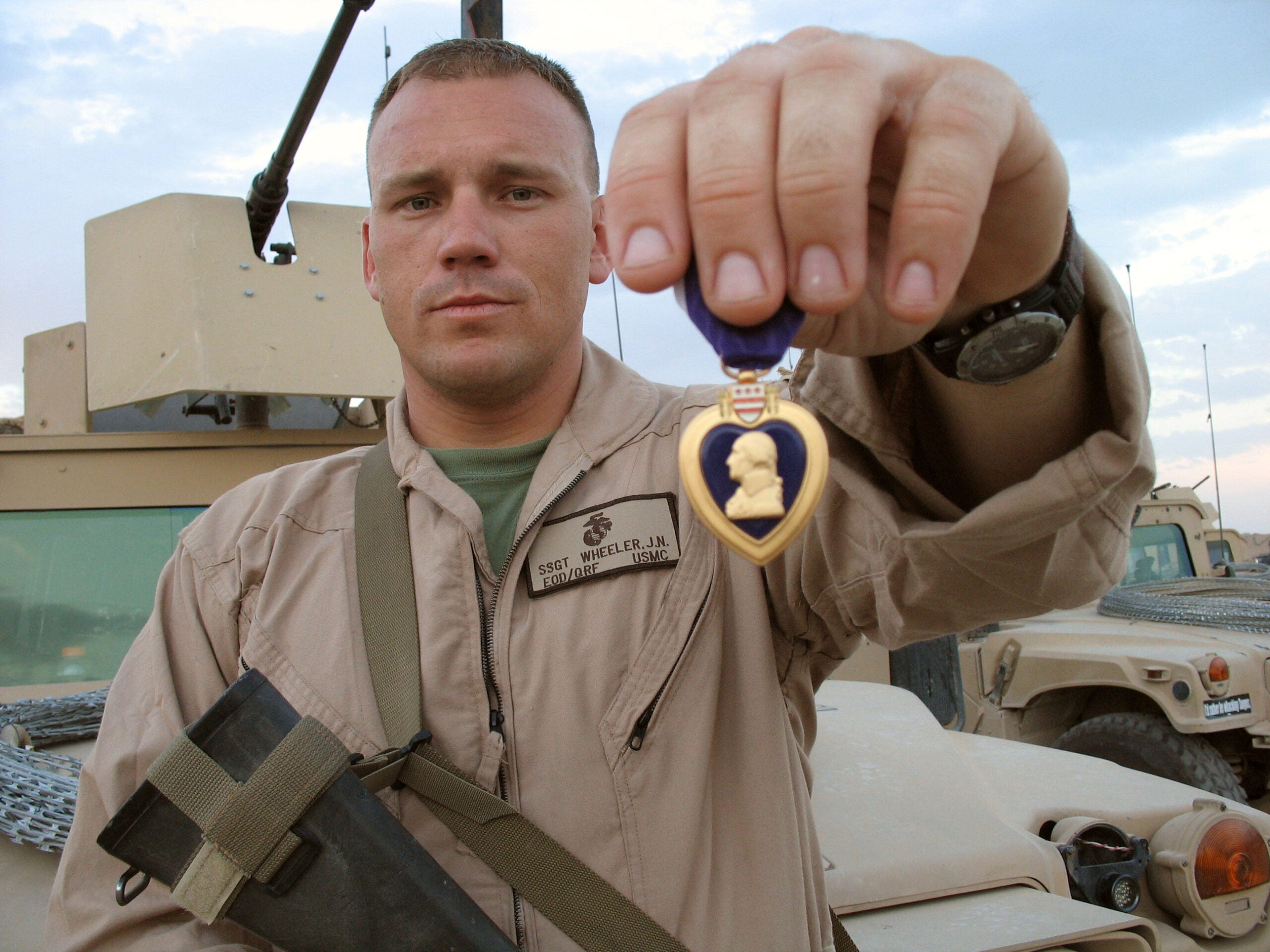 Staff Sgt. James N. Wheeler holds out a medal May 6th. He received the Purple Heart for injuries sustained during an improvised explosive device attack.

Service members, particularly veterans of Iraq and Afghanistan, frequently hear the genuine but awkward phrase, “Thank you for your service.” Often a line of inquiry begins with something like where you served, what your job was, if you ever saw combat, and if you ever killed anyone. Depending on the maturity or obtuseness of the individual, the questions can become increasingly insensitive and inappropriate.

For Purple Heart recipients the questions can be quite invasive, soliciting detail when a relationship has not been established and context cannot be conveyed. On these occasions the best answer is a curt deflection accentuated by the dark humor cultivated by years of embracing the suck. Listed below are the 5 best responses when asked about your Purple Heart.

Even those unfamiliar with military culture know one thing: the Purple Heart is awarded for wounds in combat. Those in receipt of this medal often gained it in one of the worst episodes of their lives. They may have been engaged in a fierce gunfight, or received shrapnel from a mortar attack while sitting in the porta-john. Experiences vary. Curiosity and awe outweigh tact, bringing the onlooker to attempt conversation with the inquiry, “So, you have a Purple Heart?” The veteran can snap back with a fierce look and a, “No! I received an enemy marksmanship badge!” then turn and walk away. The individual will be left standing there with a slack jaw and a puzzled look on their face; having learned a valuable lesson about social interaction while wondering “What in the world does that mean?” Upon executing an about face the veteran’s feigned scowl is replaced by a mischievous grin and fodder for the next round of sea stories at the slop chute.

2. I’m sorry you lost your leg

Some veterans have unseen wounds. Mental, emotional and psychological scars they carry for life; but ones that did not result in the awarding of medals. Some Purple Heart recipients don’t have visible scars, or at least not so when fully clothed. After decades of combat in Iraq and Afghanistan and the prevalent employment of improvised explosive devices (IEDs), we have a much larger number of amputees than seen in previous wars. Modernization in medical treatment and casualty evacuation procedures resulted in preserving many lives with these types of wounds. In the wars of yesteryear, these types of wounds would have meant certain death. Thankfully now life is preserved, though a limb is lost. A veteran in a wheelchair or with a prosthetic limb will sometimes hear a sympathetic expression, “I’m sorry you lost your leg.” The dynamics of the conversation quickly change when the veterans respond with, “I didn’t lose it, the bastards took it!”

Not all amputees are combat veterans. However, those who are often have the stereotypical tell-tale signs that reflect their veteran status. Among these are the bro-vet indicators including tactical casual attire, hats and patches, an operator beard, an overkill pocket knife, and an ever present tactical backpack. Assumptions and deductions are quickly made culminating with a question soliciting confirmation: “So you lost your arm in the war?” It is awkward, obvious and uncouth. A nonchalant reply, “Nah, shark attack. Myrtle Beach, ‘09” will turn the tables, elicit a chuckle, and potentially change the subject.

Another stereotypical scenario, which still plays out in combat even after decades of sophisticated advanced weapons system development, is being shot by a rifle or machine gun. At the Marine Corps’ School of Infantry, privates are taught the ditty, “I’m up, they see me, I’m down” as they execute fire and movement in the assault of an enemy position under fire. Likewise when participating in a “two-way rifle range,” another technique is to run in an unpredictable pattern (as opposed to a straight line) to make yourself a more difficult target. This is commonly referred to as a zig-zag. Veterans as far back as the Second World War when asked about having been shot, brusquely respond, “I zigged when I shoulda zagged.”

Each of the military branches has their own physical standards and recurring methods of evaluation through performance-based assessments. In the Marine Corps those semi-annual assessments are the Physical Fitness Test (PFT) and the Combat Fitness Test (CFT). These tests have their own requirements and scoring systems, but the maximum score for both the PFT and CFT is a 300. In late 2004 at a platoon formation in Twentynine Palms, California, new members of the platoon discovered the platoon sergeant had been shot on the previous deployment to Iraq. The squad leaders who had been with him in that firefight goaded him to respond to the topic of discussion. He simply looked at them and said, “If I had a 300 PFT instead of a 285, they wouldn’t have got me.” He then faced them to the right for a grueling one hour run in the desert hills.

You veterans with Purple Hearts cannot prevent thoughtless comments and questions from random people you cross paths with in life, but consider the five humorous responses listed above as an immediate action drill for the chance contact. Doing so will divert you from the urge to lose your temper and will introduce them to that unique variety of military humor. They may not laugh, but you will.