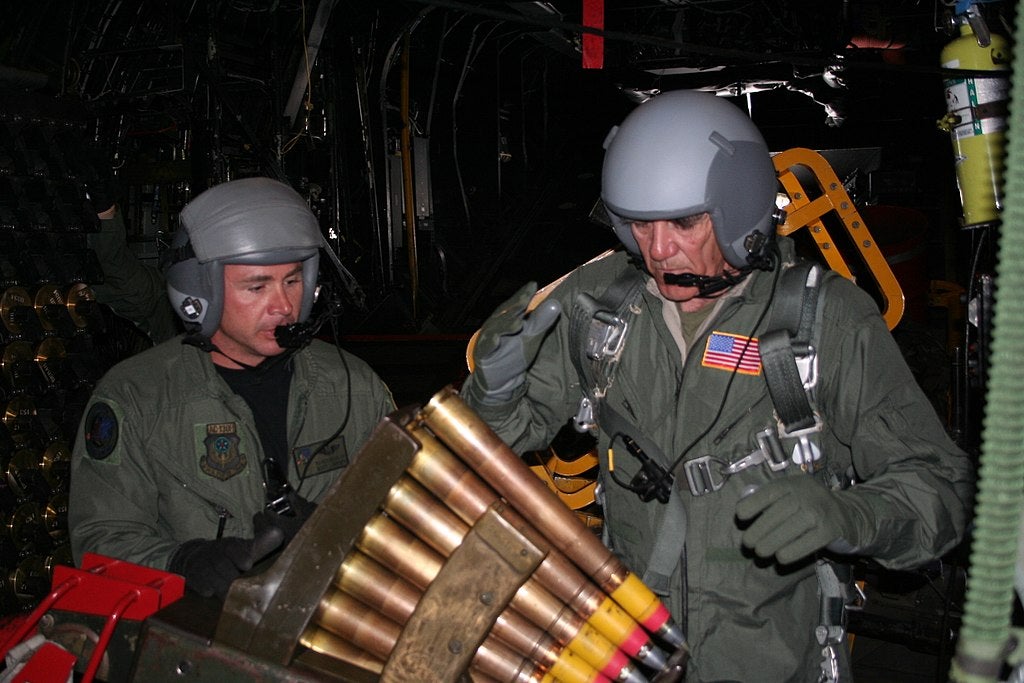 Ermey loading ammunition for the Bofors 40 mm gun aboard a Lockheed AC-130H "Spectre" Gunship in 2006.

The family of the late R. Lee Ermey, better known to his legions of fans as “The Gunny,” donated more than $10,000 to the Young Marines. Proceeds of the action came from the sale of Ermey’s collection of guns, scrips and memorabilia.

The actor and former Marine died on April 15, 2019, at 74, from complications relating to pneumonia. Gunny is best known for his vocal support of the Marines and served as the spokesperson for the Young Marines for several years. After his retirement, the United States Marine Corps bestowed him with the honorary rank of Gunnery Sergeant. Ermey is one of only a handful of people to earn an honorary rank from the Marine Corps.

Retired Col. Willian P. Davis, UCMC, national executive director and CEO of the Young Marines, said that Ermey was a known and devoted friend of the Young Marines. “He was more than a spokesman; he cared deeply about our youth and believed in our mission. We are so grateful to the Ermey family for this generation donation.”

Davis went on to say that Ermey was always very proud of his association with the Young Marines.

“He was a huge supporter and met with many Young Marines to inspire while he was alive. He appreciated our efforts to instill our youth members with a powerful sense of patriotism and responsibility.”

About the Young Marines

The Young Marines is a national non-profit youth education and service program for children aged eight through high school graduation. The program promotes the mental, moral, and physical development of its members. Young Marines focus on teaching leadership values, teamwork, and self-discipline so its members can live and promote a healthy lifestyle.

The Young Marines started in 1959 with just one unit and has now grown to over 235 units with 5,700 youth participating in over 40 states, the District of Columbia, Japan, and affiliates in several other countries. For more information on how to get involved in the Young Marines, visit the official website.

Ermey enlisted in the Marine Corps at the age of 17 and served for over 11 years, including a 14-month deployment to Vietnam and two tours to Japan. Then, when he got out of the Marine Corps, Ermey decided to go to school. He used his GI Bill benefits to enroll at the University of Manila in the Philippines, where he studied drama. This led to a chance audition with Frances Ford Coppola, who was in the area shooting Apocalypse Now. Coppola cast Ermey first as a technical advisor and as a helicopter pilot.

In 1980, Ermey played Gunnery Sergeant Hartman in the acclaimed Full Metal Jacket, a Vietnam War film. His performance as Gunny Hartman led to a Golden Globe nomination. This opened up more work for the former Marine, including a role as Sheriff Hoyt in Texas Chainsaw Massacre and Sarge in Toy Story. Ermey went on to star in more than 60 films, earning awards along the way.

Many in the military community subscribed to his top-rated YouTube channels, Lock N’ Load and Gunny Time where he reviewed weapons systems, met with other military enthusiasts, and reminded everyone what it means to be a United States Marine.

Want to learn more about The Gunny? Here are 5 Little Known Facts about R. Lee Ermey and 5 Lessons We Can Learn from Gunny.