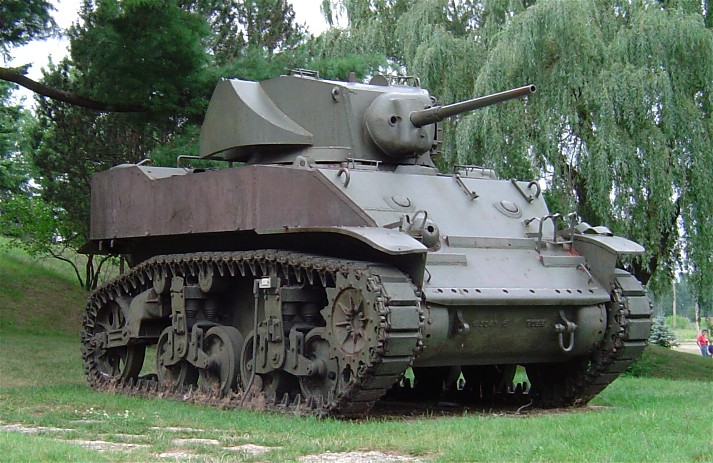 With the Mobile Protected Firepower program in the testing and evaluation phase, the Army is getting closer to adding a light tank back into its inventory. The XM8 Armored Gun System was the last tank to come close to filling the role. However, it was cancelled in 1997 before it left the experimental phase. Here are 7 light tanks that did see service with the Army.

The introduction of the tank during WWI changed the face of war forever. However, America didn’t have a tank of its own during the war. Instead, U.S. soldiers like George S. Patton crewed French tanks like the Renault FT-17. After the war, America got to work developing its own armored doctrine and vehicles. Light tanks were defined as weighing five tons or less so that they could be carried by trucks. Then-Chief of Staff of the Army General Douglas MacArthur promoted the mechanization of the Army to equip cavalrymen with armored fighting vehicles as well. Designated as combat cars, these light tanks allowed cavalry units to exploit opportunities on the battlefield rather than being tied to the infantry in a support role. Despite its name, the M1 Combat Car was a bonafide light tank. Developed and built by the Rock Island Arsenal, it had tracks, light armor and a turret. Armed with just one .50-cal M2 Browning machine gun and two .30-cal M1919 Browning machine guns, the M1 was not well-suited for direct combat. By the time WWII started, the M1 was obsolete. Still, it paved the way as America’s first light tank.

Another inter-war design, the M2 went through a number of variants before WWII. However, the most common was the M2A4 equipped with one 37mm M5 gun and five .30-cal M1919 Browning machine guns. Before WWII, the most common variant was the M2A2. It was only equipped with machine guns. The Spanish Civil War showed that tanks armed only with machine guns were ineffective, so the U.S. added the 37mm M5 gun. By the time WWII broke out, the Army had moved on to the M3 light tank. The only American unit to field the M2 in combat was the Marine Corps’ 1st Tank Battalion.

An evolution of the M2, the M3/M5 Stuart was the main American light tank of WWII. The tank was also supplied to British forces under the Lend-Lease Act. It was British forces who named the tank Stuart after American Confederate General J.E.B. Stuart. The M3 featured thicker armor, modified suspension, and an upgraded 37mm M6 gun over the M2. The M5 was given an updated engine and an automatic transmission. It was also quieter, cooler, and more spacious inside than the M3. Initially designated the M4 light tank, it was redesignated the M5 to prevent confusion with the M4 Sherman tank. In the African and European theaters, the Stuart was outgunned by the heavier German tanks and deadly anti-tank units. However, it excelled at traditional cavalry missions like scouting and screening. In the Pacific theater, the Stuart saw more direct action. Japanese tanks were a rare sight and were generally outgunned by American tanks. Moreover, the dense jungles of the Pacific islands were more easily navigated by the smaller M3/M5 than the larger M4 Sherman.

Officially designated the Light Tank (Airborne), M22, the Locust was the first light tank of its kind. In 1941, the British War Office requested that America develop a light tank that could be transported via glider to support airborne troops. The result was an exceptionally small tank. Weighing just 7.4 metric tons and measuring 12 feet 11 inches long, 7 feet 1 inch wide, and 6 feet 1 inch tall, the Locust was truly a light tank. Crewed by 3 men, it was equipped with a 37mm M6 gun and one .30-cal M1919 Browning machine gun. However, the Locust was not ready to fight as soon as it landed. The turret was removed during flight in order to fit inside a glider. Upon landing, it took six men about 10 minutes to unload and assemble the Locust. As a result of this, its light armor, and small gun, the M22 performed poorly in British service during Operation Varsity in 1945. Of the eight tanks flown in to support the airborne operation, only four made it to the rendezvous point. Of those four, only two were undamaged and fit for service. Although a small number of Locusts were delivered to U.S. Army units, they never saw combat.

Officially designated the Light Tank, M24, the Chaffee also owes it name to the British. While serving with the British Army, the M24 was named after U.S. General Adna R. Chaffee Jr. who is often referred to as the Father of the Armored Force for his work in developing the use of tanks in the U.S. Army. The British use of the M3 in North Africa demonstrated the shortcomings of its 37mm gun. However, the larger 75mm gun proved to be a more capable anti-tank weapon. In 1943, the Ordnance Corps started a project to develop a new light tank equipped with a 75mm gun. In order to keep the new tank under 20 tons, its light armor was heavily sloped to maximize its effectiveness. First delivered in October 1943, the M24 was equipped with a 75mm M6 main gun, one .50-cal M2 Browning machine gun, and two .30-cal M1919 Browning machine guns. The tank first saw action during the Battle of the Bulge and entered widespread use in December 1944. It was well-received for its improved off-road performance, reliability, and firepower over the M3/M5 Stuart. The M24 went on to serve during the Korean War where it suffered in direct combat but excelled in the reconnaissance and support roles alongside heavier tanks.

The M41 is unique in that is was developed independently by Cadillac and marketed to the U.S. military to replace the M24. First produced in 1951, the M41 was capable both as a reconnaissance vehicle thanks to its high speed and mobility, but also as a support tank with its 76mm M32A1 rifled cannon. The tank was named for the late General Walton Walker who was killed in a jeep accident in 1950. It was also the first American postwar light tank to see worldwide service and was heavily exported. Although the M41 was adopted too late to see use in the Korean War, five M41s were given to democratic Cuban forces for use during the Bay of Pigs Invasion. The Cubans received training at Fort Knox in March 1961 and were transported to Playa Girón on April 17. Despite heavy resistance, all five tanks made it ashore. Although they had initial successes, knocking out several communist T-34/85 tanks, heavy armored counterattacks meant that the tank crews expended all of their ammunition by noon. The surviving tanks were abandoned on the beach when the invasion failed.

Entering service in 1967, the M551 Sheridan was a light tank developed for armored reconnaissance and airborne operations. Named for Union Civil War General Philip Sheridan, the M551 was designed to be dropped from a plane via parachute. It was also amphibious and capable of crossing rivers before heavy bridge-laying vehicles could be driven onto the battlefield. The Sheridan also featured a unique gun. Its 152mm M81 gun could fire conventional tank rounds. However, it also doubled as a launcher capable of firing the new MGM-51 Shillelagh guided anti-tank missile. The Sheridan performed well in Vietnam. Its light weight meant it was less prone to getting stuck in the mud compared to the heavier M48 Patton. The tank also excelled in direct-fire support of infantry. With its M657 High Explosive and M625 Canister rounds, it was an effective anti-personnel weapon. The Sheridan saw limited use during Operations Desert Shield and Desert Storm. It saw its first combat air drop during Operation Just Cause in Panama where it also saw limited use. The Sheridan was retired from service in 1996 without a replacement. However, it did see limited use as a training aid for the Armored Officer Basic Course and as a simulated Soviet armored opposition force at the National Training Center at Fort Irwin until 2003.