The history of Operation Desert Storm - We Are The Mighty

The history of Operation Desert Storm 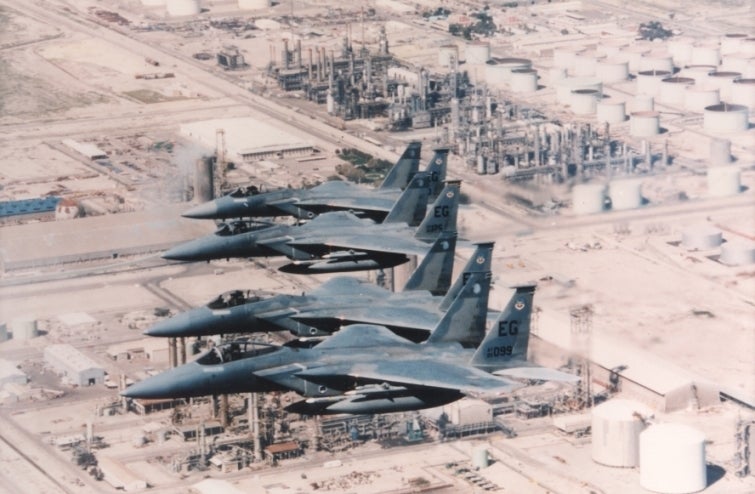 Operation Desert Storm officially began on January 17, 1991. That’s when a coalition of 34 nations, led by the United States, began bombarding military targets in Iraq. The bombing was in response to that country’s invasion and occupation of Kuwait two months earlier. The air campaign lasted for 42 days and nights before a 100-hour ground offensive drove the Iraqi forces out of Kuwait. The operation came to be known as the Persian Gulf War. It’s also called the First Gulf War or simply Operation Desert Storm.

The lead-up to Operation Desert Storm started in August 1990. That’s when Iraqi forces invaded and seized control of Kuwait, a small oil-rich country on Iraq’s southeastern border. The United Nations Security Council immediately condemned the invasion and demanded that Iraq withdraw its forces from Kuwait. When Saddam Hussein, Iraq’s dictator, refused to comply, the UN authorized military force to expel the Iraqi troops.

Just one day before Operation Desert Storm started, then-president George Bush addressed the nation from the Oval Office. “Our jobs,” he told Americans, “our way of life, our own freedom and that of other countries around the world would all suffer if control of the world’s great oil reserves fell into hostile hands.”

In August 1990, Iraq invaded and occupied the small, oil-rich nation of Kuwait. The United Nations passed a resolution calling for Iraq’s withdrawal from Kuwait, but Saddam Hussein refused to comply. In November, UN members voted to authorize military force if Iraq did not withdraw from Kuwait by January 15, 1991.

When that deadline came and went without any sign of compliance from Iraq, the coalition forces began launching airstrikes against Iraqi targets. This campaign continued for five weeks until Iraqi forces finally capitulated.

The air campaign component of Operation Desert Storm began at 7 p.m. EST on January 17 with a televised address from President George H.W. Bush. “Today,” he said, “the skies over Baghdad have been darkened by one of the most concentrated airstrikes in military history.” Within minutes of Bush’s speech, more than 200 American aircraft were already in Iraqi airspace. Quickly, bombs dropped on military targets throughout the country.

For 42 days and nights, allied forces pounded Iraq with bombing raids around the clock. The Iraqis managed to score some successes against the coalition forces, most notably on February 25. That’s when an Iraqi missile hit an American barracks in Dhahran, Saudi Arabia. The missile killed 28 soldiers and wounded 98 more. Then, on February 27, ground combat operations began. Allied tanks and infantry moved into Kuwait and southern Iraq, driving back the Iraqi forces. By February 28, most organized resistance had ended. On March 3rd Saddam Hussein announced that his troops would begin withdrawing from Kuwait. By April 11, the withdrawal was complete. Shortly thereafter, President Bush declared a cease-fire.

Operation Desert Storm was a massive undertaking involving 34 nations and hundreds of thousands of troops. It was also immensely successful in achieving its stated objectives. Namely, it liberated Kuwait from Iraqi occupation and restoring its rightful government. Operation Desert Storm also ushered in a new era of combat where air power played a decisive role.

The Aftermath of Operation Desert Storm

In the years following Operation Desert Storm, it became increasingly clear that Saddam Hussein had no intention of giving up his quest for regional dominance. He continued to oppress his own people, flout international law, and amass weapons of mass destruction. In 2003, after years of diplomatic efforts failed to bring about change in Iraq, the United States led a coalition invasion with the stated goal of removing Saddam Hussein from power.

While successful in its immediate objective, this second Gulf War—often referred to as the War in Iraq—unleashed a wave of sectarian violence that continues to destabilize the region today. Furthermore, many believe that the War in Iraq was a rallying cry for Islamic extremists and helped fuel the rise of terrorist organizations like ISIS.