The complete post guide to Fort Knox - We Are The Mighty 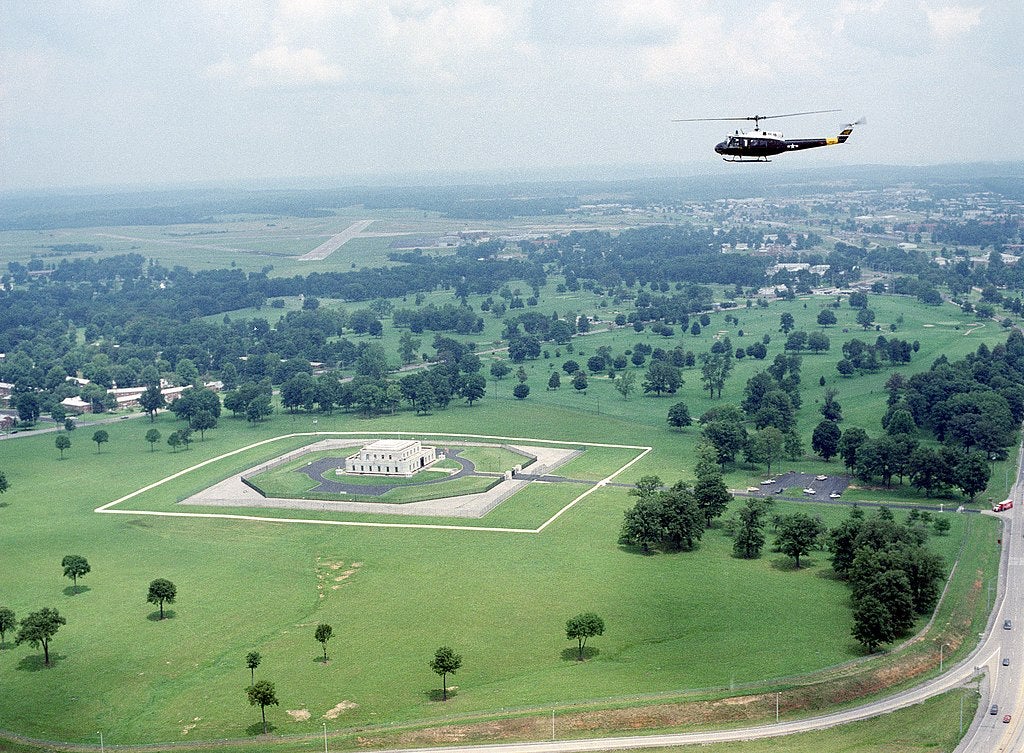 Aerial view of the Bullion Depository. Godman Army Airfield can be seen in the background.

Does Fort Knox’s gold really exist? And if it does, why can’t the public see it? That’s the exact question treasure hunters and sleuths have been asking for years. So, if a PCS to Kentucky is in your future, then you’ll have the chance to find out. Okay, not really because we’re pretty sure the DoD doesn’t let anyone see inside the vaults. But still – knowing you’re that close to America’s reserves has to count for something, right? Read on to find out everything you need to know about a posting to Ft. Knox, including the history of how the vault came to be.

Soldiers and Army families probably know Knox best as HRC. It’s the post from which all orders are issued. So it’s no surprise then that the post is home to the Human Resources Command. HRC personnel are the career managers for all Army MOS’. Additionally, it’s home to the Army Recruiting Command and the Army Cadet Command. The post is named in honor of Henry Knox, Chief of Artillery during the Revolutionary war and first Secretary of War of the United States.

Just as notable, this Army post is the sixth largest in Kentucky. Knox comprises more than 100,000 acres and stretches over three counties. Fort Knox has also been one of the most important military installations in the U.S. since the Civil War. Speaking of the Civil War, here are 12 surprising facts about the conflict you might not know.

Fort Knox is located between Elizabethtown and Louisville. It’s about 25 miles south of Louisville. It straddles Bullit, Hardin, and Meade counties. Because of its size, Ft. Knox is certified as a city in the Commonwealth of Kentucky.

Traveling by car from the Louisville International Airport: Take I-65S to the Gene Snyder Freeway West (KY 841) until you reach the 31W Fort Knox exit. This exit will take you to the entrance gates of Fort Knox.

Flying is probably the most convenient option. You’ll fly into the Louisville International Airport. Expect travel from the airport to post to take about half an hour.

Main Chaffee Gate is 24/7 and is the site of the Visitor’s Control Center.

Brandenburg Gate is open Monday through Friday 0600 – 1300, closed on holidays and training days

The main mission at Ft. Knox is to recruit, train, and support warfighters for the challenges of the twenty-first century.

Ft. Knox boasts a diverse collection of missions and units. It’s home to the Army Human Resource Center of Excellence.

Units currently stationed at post include the 3rd Brigade Combat Team 1st Infantry Division. The Big Red One, as the 1st ID is known, is the oldest continuously active division in the Army.

This hybrid Treasury Department-Army installation can trace its roots back to 1918. That’s when the War Department leased 40,000 acres of land from the Commonwealth of Kentucky to conduct artillery training.

In 1932, the 1st Cavalry Regiment arrived at post and remained there until 2011. That’s when the Base Realignment and Closure commission merged the Armor Center and the Infantry Center and relocated both to Ft. Benning, Georgia as the Maneuver Center of Excellence.

Ft. Knox served as an important Navy testing site during the spring and summer of 1942. An all-wood mock-up of a Landing Ship Tank well deck was created to allow naval architects to track airflow and test vent systems. The building still stands at Ft. Knox and it’s one of the few remaining WWII structures on post.

The Patton Museum opened its doors in 1949 and showcased armored vehicles associated with Gen. Patton. When the Korean War started, trainers from Ft. Knox formed the 72nd Tank Battalion and deployed to fight in the conflict.

Then, in 1992 the Recruiting Command Headquarters relocated to post. In 1996, the last original M1 Abrams tank retired from Army service at a ceremony at Ft. Knox.

These days, Ft. Knox is exclusively focused on career management of America’s next generation of Soldiers.

Things to Do Around Ft. Knox

Naturally, you’re going to want to get as close to the Knox gold as possible. Kidding, of course. Don’t worry – there’s plenty to without trying to get into the gold depository.

Most of the classic Kentucky dishes you might associate with the state got their start in Louisville. So being stationed in Ft. Knox means you’ll have access to some of the most famous Kentucky dishes! You might want to try benedictine, a sandwich spread made from cream cheese, mayo, and cucumber. Of course, if you’re in Louisville, you’ll have to stop by the Brown Hotel for a Hot Brown sandwich. Derby pie is another region favorite, as is wilted lettuce. If you’re looking for sweets, try the apple stack cake. Legend has it the cake developed as a replacement for an expensive wedding cake for early Appalachians.

Nearby Louisville and Elizabethtown offer plenty of excellent recreation options. Be sure to visit the Kentucky State Fair. This 11-day event attracts over half a million people to the Bluegrass State. It’s held in Louisville and has been a Kentucky staple since 1902.

Bourbon fans, don’t skimp on the Kentucky Bourbon Festival, held in Bardstown, Kentucky. The “bourbon capital of the world” has been distilling spirits since 1776.

Of course, the Kentucky Derby is an institution all on its own. Book tickets early as the event always sells out.

On post, don’t miss out on seeing the Gen. George Patton Museum! It showcases the history of the Army’s Cavalry as well as Patton’s career.

Unaccompanied housing is available to enlisted ranks E-1 to E-5. All single service members must report to their unit to be assigned barracks space.

As soon as you receive orders, call the Housing Management Office. The HMO can help with community referrals, relocation assistance, and more. The office can also place you on a waiting list for on-post housing.

Why is Fort Knox so famous?

Ft. Knox is famous in the Army for being the home of Human Resources Command. In the civilian world, it’s famous because it’s where America stores its gold.

Why is Fort Knox so heavily guarded?

It’s so heavily guided because of what’s inside the bullion depository vaults – gold!

Has anyone been inside Fort Knox?

It’s really, really secure. So unless you’re there on the bequest of the Treasure, you’re not getting in. In fact, not much is known about what the inside of the repository is even like inside.

Is it possible to break into Fort Knox?

Probably not. The United States Bullion Depository is surrounded by a steel fence and the building is made of concrete-lined granite and reinforced with steel. It’s equipped with the latest and most modern protection devices.