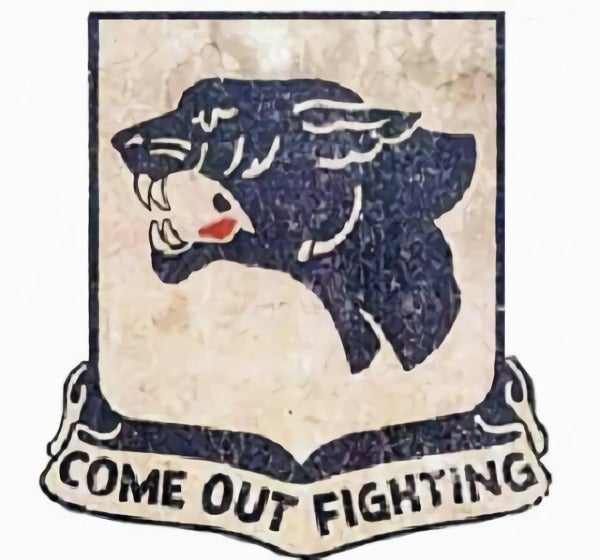 “Patton’s Panthers” was one of the most effective tank battalions in World War II, fighting a continuous 183 days at the front and inflicting heavy casualties on the Germans while crews racked up accolades from their peers, including three Medal of Honor nominations in their first month of combat.

In the end, the men of the 761st Tank Battalion were awarded a Medal of Honor, 11 Silver Stars, and about 300 Purple Hearts despite facing racism as the first black armored unit in combat and the second in U.S. military history.

The first black armored unit was the 758th Tank Battalion which received 98 black enlisted men in 1941. The 761st followed in March 1942 as a light tank battalion but converted to medium tanks in September 1943.

At a time when most tank units were getting months of training, as little as three months in some cases, the 761st received over two years before shipping to France in October 1944. A historian for the unit, former Sgt. Wayne D. Robinson, theorized that this extended training time came because big Army couldn’t decide what to do with black forces.

But the Panthers got called to the show in 1944 and landed in France that October. Immediately, they made an impact on the attitudes of their peers in other units. Its first day of combat came on Oct. 31 when it fought for a vital hill. After just over a week of fighting, it was tasked with hitting German-held towns on Nov. 8.

It was on that day that the battalion struck a German roadblock that could spell doom. The tanks were forced to stop, making them easy targets for German guns.

Despite fierce German fire, Staff Sgt. Ruben Rivers rushed out of his tank and attached a cable to the roadblock before dragging it out of the way. The American tanks pushed forward through the opening and the attack was successful.

The next day, Charlie Company 1st Sgt. Samuel Turley found his company under heavy German fire with wrecked tanks. He ordered the crews to dismount and organized a resistance before climbing from a ditch to lay down cover fire. His gamble saved his men, but he was cut down by German machine gun fire.

The day after that, on Nov. 10, Sgt. Warren G.H. Crecy fought his way forward to save his men under fire until his tank was destroyed. He then commandeered another vehicle and killed his attackers with a .30-caliber machine gun before turning the weapon on German artillery observers.

On Nov. 11, Crecy was back at it. His tank was immobilized and he attempted to get it going until he saw German units attacking the nearby infantry. So he climbed onto his .50-cal. and gave them cover. Later that day, he destroyed machine gun nests and an anti-tank weapon.

Rivers was back in the spotlight Nov. 16-19. A mine shot fragments through his leg and destroyed his knee on Nov. 16. Despite the recommendation that he immediately evacuate, Rivers led the way across a brand-new bridge the next day and took on four German tanks, killing two and driving two more back.

By Nov. 18, Rivers’ leg was infected but he still refused to go home. The next day, Rivers directed fierce fire onto German anti-tank guns until two rounds pierced his own tank and went through his head, killing him instantly.

All three men, Rivers, Crecy, and Turley, were nominated for the Medal of Honor but only Rivers received it.

The next month the 761st conducted assaults aimed at breaking up the German forces at the Battle of the Bulge, slowing German resupply and taking the pressure off the units under siege despite the fact that the 761st was fighting a numerically superior enemy.

After another month and a half of fighting, the 761st threw itself against a dug in and numerically superior enemy once again while leading the armored spearhead through the Siegfried Line and fought “the fiercest of enemy resistance in the most heavily defended area of the war theater” for 72 hours according to its Presidential Unit Citation.

On May 5, 1945, the 761st linked up with Russian Forces in Steyr, Austria. Over the course of the war, the unit had lost nearly 50 percent of its starting forces and 71 tanks. It was also credited with inflicting 130,000 casualties.