These are the 7 finest moments in Army history 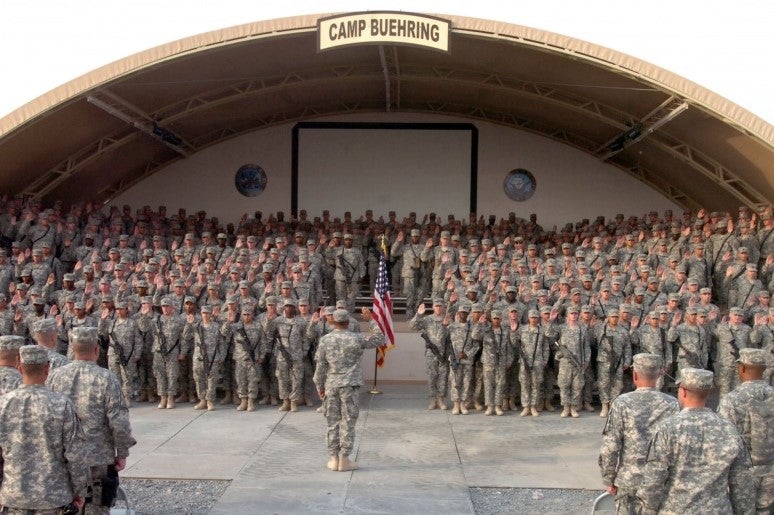 The U.S. Army has over 240 years of storied history, defending America in war after war. The branch ensures American ideals around the world and has stood strong against fascists, dictators, and kings. These are seven of their finest moments.

The Battle of the Bulge was, ultimately, Hitler’s fever dream. The thought was that the German Army could buildup a massive force, cut apart the western Allies, destroy them, and then turn around and beat back the Soviet Union. It was never possible, but someone had to do the nitty-gritty work of shutting down Hitler’s advance and then resume the march to Berlin.

American Army paratroopers rushed in to hold the line at key crossroads, and soldiers dug in and slowly beat back the 200,000 troops and 1,000 tanks of the German Army. Artillery barrages rained down on German armor even as it crawled up to the firing positions. American armor got into legendary slugfests with German Panzer columns and infantrymen traded fire at close range, even as shells rained down.

From December 16, 1944, through January, 1945, the Americans cut apart the German bulge and prepared for the drive into the German heartland.

2. The Army embarrasses the world’s greatest military power at Saratoga

During the American Revolution, the nascent United States needed a large victory to prove to foreign countries that the rebellion was viable and that they should be recognized as a new nation. A great chance came in late 1777 when British forces coming down from Canada prepared for a massive attack against American General Horatio Gates and his men.

British commander Gen. John Burgoyne lacked the troops during the First Battle of Saratoga, which took place on September 19. He attacked and was barely able to take the field by end of day, suffering twice as many casualties as he inflicted. On October 7, they fought again and the Americans looked good in early fighting — but their attack began to falter. Right as it looked like as though a reversal may occur, Brig Gen. Benedict Arnold charged in with a fresh brigade and saved the day.

Burgoyne managed to retreat the next day, but was eventually surrounded and was forced to surrender on October 17, leading to French recognition of America and open support for the continentals.

3. America drives the final nails in Germany’s coffin in the Meuse-Argonne Offensive

On September 26, 1918, America launched a massive offensive in support of its French allies against the Germans. The operation was under the control of the American Expeditionary Force and Gen. John J. Pershing. They led 37 American and French divisions under artillery cover against the German 2nd Army.

The Americans captured 23,000 Germans in the first 24 hours and took another 10,000 the following day. American and French forces took ground more slowly than expected, but fairly persistently. The Germans were forced into a general retreat and just kept falling back until the armistice was signed on November 11.

The American offensive helped lead to a nearly complete surrender, negotiated in a train car between Germany and France, by which Germany was forced to give into nearly every French demand. America’s victory there solidified America’s prominence as a true world power.

4. America rolls back the Communists in Korea

The Korean War was initially a war between the two Koreas, with communist forces invading south on June 25, 1950. America sent troops within days to help protect the democratic South Korea, and Task Force Smith fought its first battle on July 5. Early on, American troops fought with limited equipment and reinforcements, but gave ground only grudgingly.

Still, the tide was unmistakable, and democratic forces were slowly pushed until they barely held a port on the southern coast by September, 1950. The Army landed reinforcements there and sent an Army and a Marine division ashore at Inchon, near the original, pre-war border. The two forces manage to break apart most North Korean units and drive north.

By Oct. 19, they had captured the communist capital at Pyongyang and were continuing to drive north. This is the “forgotten victory” as U.S. troops had successfully destroyed the communists on the field. Unfortunately, China would soon join the war, overshadowing the Army and Marine’s success in 1950.

The Union Army was very effective during the Appomattox campaign, harrying the retreating Confederates and pinning down Lee’s forces to ensure the war didn’t drag on much longer, but that wasn’t the reason that Appomattox Court House represents one of the Army’s finest moments. The real miracle there was that the two forces, both of which would later be accepted as part of Army lineage, were able to negotiate a peaceful end to the hostilities, despite the animosity.

The war had raged for four years, and Gen. Robert E. Lee still had 28,000 men with which he could have drug out the fighting. But when it became clear that his army would be destroyed or descend into broken looting, he contacted Gen. Ulysses S. Grant to surrender at a house near the fighting.

“The war is over. The Rebels are our countrymen again.”

He gave generous surrender terms, allowing those with horses to keep them so that they could use the animals for late planting. For everyone who remained at the field, the Union opened up their rations to ensure all would eat.

6. Allies land at Normandy on D-Day

It’s one of the most storied and iconic moments in U.S. military history. Thousands of boats carried tens of thousands of troops against reinforced, German-held beaches of France. Machine gun fire rained down from concrete bunkers and engineers were forced to blow apart wire, mines, and other obstacles for the men to even get off the beaches, most of which extended 200 yards before offering any real cover.

Rangers climbed steep cliffs to capture enemy artillery and paratroopers dropped behind enemy lines to secure key infrastructure and silence the big guns inland. Engineers constructed new harbors to rapidly land all the materiel needed to push forward against the staunch German defenses in the hedgerows of France.

In the end, over 1,400 U.S. soldiers were killed in the first 24 hours of fighting, and four men were later awarded Medals of Honor for their valor. Their incredible sacrifices were honored with success. The western Allies had their toehold, and a new front opened in the war against Germany during the Holocaust.

7. The dissection of Saddam Hussein’s Army

Operation Desert Storm was a true joint fight with the Navy providing a fake amphibious landing, the Marines conducting operations on the coast and inland, and the Air Force dropping bombs across the country while downing enemy planes.

But the U.S. Army formed the bulk of the maneuver forces, and the huge left hook through the desert was a logistical nightmare that allowed the coalition to absolutely wallop Iraqi forces. Within that left hook, then-Capt. H.R. McMaster led an armored cavalry charge where one troop cut a huge swath through an Iraqi division while suffering zero losses.

Meanwhile, an Army artillery battery conducted a rocket raid from inside enemy territory, and the unit’s battalion destroyed 41 Iraqi battalions and a tank company in less than 72 hours. The Iraqi military had been one of the largest in the world when the war started, but it lost roughly half of its tanks and other equipment in the fighting while inflicting little losses on the U.S.

The ground war had lasted only 100 hours.