Snipers may have changed the course of the entire Revolutionary War 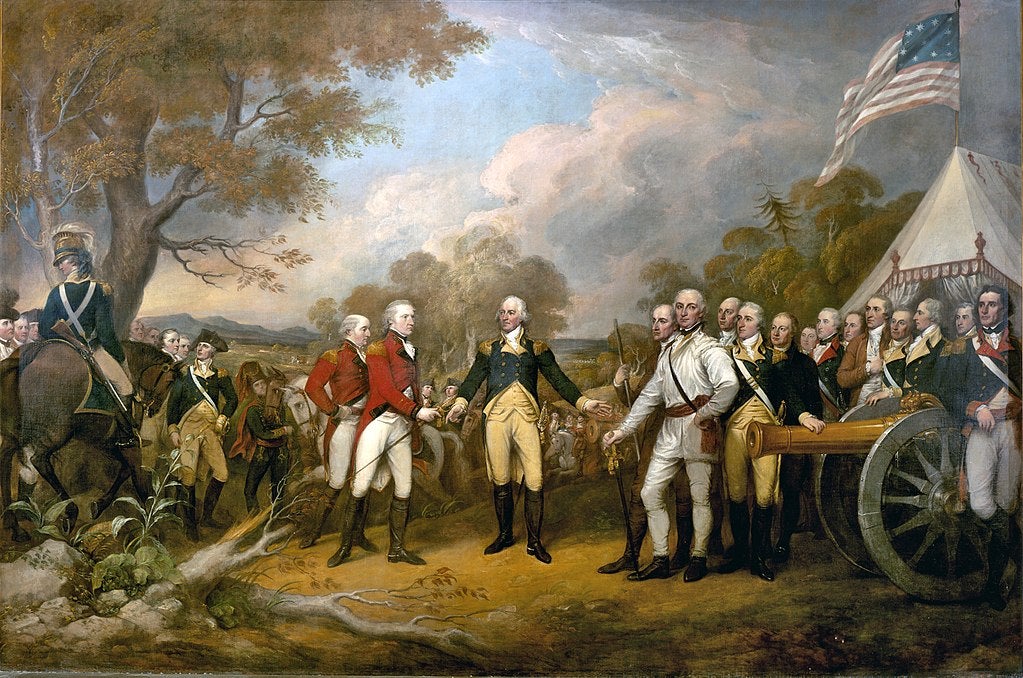 Surrender of General Burgoyne Col. Morgan, having led his Riflemen in this victory, is shown in white, right of center.

It’s hard to overestimate how important the 1777 Battle of Saratoga was to the American cause of independence. No one expected the Americans to beat two of the British Crown’s best generals in North America and turn the invasion of New York back to Canada, but they did.

In the days that followed, Gen. Horatio Gates was propelled to stardom, with some patriots crying for him to take over as commander-in-chief for the seemingly less successful George Washington. It also compelled French King Louis XVI to join the war on the American side, which would help lead the Americans to their ultimate victory.

This major turning point in the war might have been precipitated by one patriot sniper and the orders to kill a British officer at a critical time in the battle. It would be a major moment that changed the entire history of the world.

What we know today as the Battle of Saratoga was actually two separate battles. The Continental Army in the area was reeling from the loss of Fort Ticonderoga earlier that year. Gen. Horatio Gates was given command of the army in New York and received some much-needed help from Gen. Washington.

Meanwhile, the British under Gen. John Burgoyne was moving south from Quebec and was facing its own problems. It had lost most of its Native allies and the approaching winter meant he either needed to retreat from New York or advance onto Albany. He decided to maintain his strength, cut his communications and supply lines from the north and move toward Albany.

Burgoyne was hopeful that he could be bolstered by men and supplies from Gen. Sir Henry Clinton’s army moving from New York City, so he pressed on and eventually met Gates at Saratoga, outside of Saratoga at a place called Freeman’s Farm on Sept. 19, 1777. This battle did not go well for the Americans.

The brightest spot for the Continental Army at Freeman’s Farm was the contingent of Daniel Morgan’s sharpshooters, who picked off so many officers and artillerymen that the Americans were actually able to advance and capture British guns, even if it was just a temporary advance. But the snipers weren’t enough to turn the tide of the battle and the British kept the field.

Before the two armies clashed again on Oct. 7, 1777, Burgoyne realize help from Clinton would not be forthcoming and the Battle of Saratoga became a must-win for the British invasion of upstate New York. Meanwhile, the American defenders were being bolstered with fresh troops and Morgan’s sharpshooters were wreaking havoc on British officers.

Burgoyne, low on rations and now outnumbered, went on the offensive, attacking the Americans at Bemis Heights. The critical point of the battle was centered on the American left flank, where the British were attacking with grenadiers and bayonet charges. Morgan’s snipers were able to single-handedly keep the British from moving westward to support a British advance. Burgoyne himself was almost killed three times by the marksmen.

The snipers did manage to kill off British Gen. Simon Fraser, which, combined with the arrival of a large brigade of New York militia, broke the back of the British Army’s left wing and forced them into a disorganized retreat. Approximately 400 British soldiers were killed in the retreat and the British lost six of the 10 artillery pieces.

Then, the worst happened for the British. Gen. Benedict Arnold’s force rode out into the battle and went on the offensive, forcing a general retreat on the British right wing. They fell back to a redoubt but that fortification was captured by the Americans, who now threatened the British camp.

Burgoyne, now outnumbered three-to-one and having taken heavy losses, was forced to retreat under the cover of darkness. On October 17, 1777, Burgoyne’s Army surrendered to the Americans.