An insider's look at the Confederate surrender at Appomattox Court House 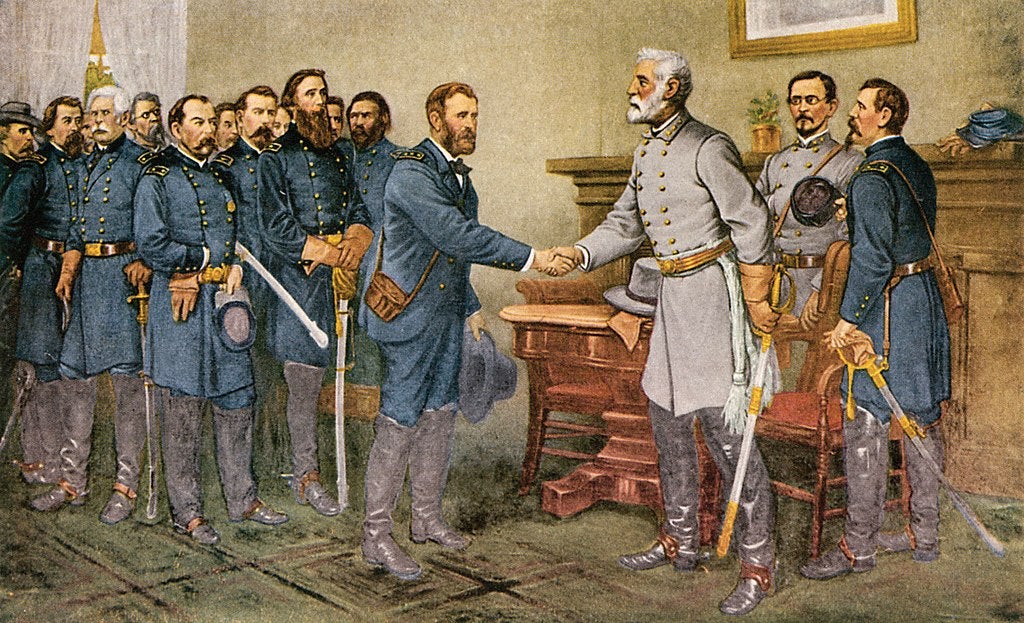 If there’s a best insider’s look at the beginning of the end of the Civil War – the Confederate surrender of the Army of Northern Virginia in 1865 – look no further than that of General Ulysses S. Grant. The former commander of the Union Army penned his memoirs before his death in 1885 and they include a sharp recollection of the days that ended the war, along with what took place at Appomattox Court House.

When Grant left his tent on April 9, 1865, he was unsure of where the day would take him or the Union Army. He had been chasing Lee and his army across Virginia, forcing it to give up the Confederate capital at Richmond. Grant believed Lee’s army was now in a place where it could not escape, and would be forced to fight their way out or surrender.

The past few days saw the Union Army advancing on Lee, capturing Confederate supply wagons and taking enemy prisoners. The consensus among captured enemy officers was that the southern cause was lost and that more fighting would be nothing short of murder. Grant was of a similar mind and wrote to General Lee on April 7th – asking if Lee would consider terms of surrender.

Grant didn’t truly believe Lee would be ready to surrender so soon. Leaving his tent on April 9th, he was ill and was thus wearing the uniform of a private and did not carry a sword. The only thing he wore to indicate that he was the highest-ranking officer in the Union Army was his lieutenant general’s shoulder straps.

Lee and Grant had been in communication for two days about conducting a meeting about the surrender of Lee’s army. Grant’s surrender demand was that the officers and men of the Army of Northern Virginia should be disqualified from continuing their roles in the war until they could be properly exchanged.

Grant states in his memoirs that Lee’s army was slowly falling apart. The men who had enlisted in the army were now near their homes and with their enlistments up and the army “crumbling,” they had begun returning to those homes. Still, on the morning of April 9th, Confederate forces attacked the Union forces to attempt one last breakout, believing there was only light Union cavalry in their way.

Instead of Philip Sheridan’s cavalry, the Confederates were facing an entire Corps and the Army of the James at Appomattox Court House. The Union infantry pushed forward rapidly and forced the Confederates back. Grant woke up with a migraine headache, not expecting to negotiate Lee’s surrender, which explained his shabby appearance. Given the assault of the morning, Sheridan and Gen. George G. Meade thought the white flag Lee sent to the Union was a ruse. But when Grant received Lee’s request for surrender, the Union commander’s headache disappeared.

Lee arrived at the home of Wilmer McLean for the meeting first. Grant soon followed with his staff. Lee was dressed resplendently, with a full uniform and a new sword that Grant supposed was ceremonial and presented to him by the State of Virginia. Grant knew his own appearance was shabby in contrast.

The two men greeted each other with a handshake and sat down to begin negotiations. Grant called Lee’s demeanor “impassable” and had no idea what his feelings on the situation were. They began by talking about the “Old Army” and the Mexican War, their time at West Point, and colleagues they knew. Grant could not hide his emotions, however.

“my own feelings, which had been quite jubilant on the receipt of his letter, were sad and depressed. I felt like anything rather than rejoicing at the downfall of a foe who had fought so long and valiantly, and had suffered so much for a cause, though that cause was, I believe, one of the worst for which a people ever fought, and one for which there was the least excuse. I do not question, however, the sincerity of the great mass of those who were opposed to us… Our conversation grew so pleasant that I almost forgot the object of our meeting.”

When Lee reminded Grant why they were meeting, Grant reiterated his terms. The Army of Northern Virginia should lay down their arms and go home. Officers would be allowed to keep their personal possessions, including horses and sidearms. Grant even allowed farmers who owned animals to keep them so they could work their fields upon returning home. After these simple terms were put to paper, the men went to leave.

Grant remarked that Lee never offered his sword and the story about Grant returning the sword to Lee was “pure fiction.” What did happen is that Lee told Grant his men were lacking food and asked for rations to be distributed, which Grant agreed to do. The two men then left “as cordially as we met.”