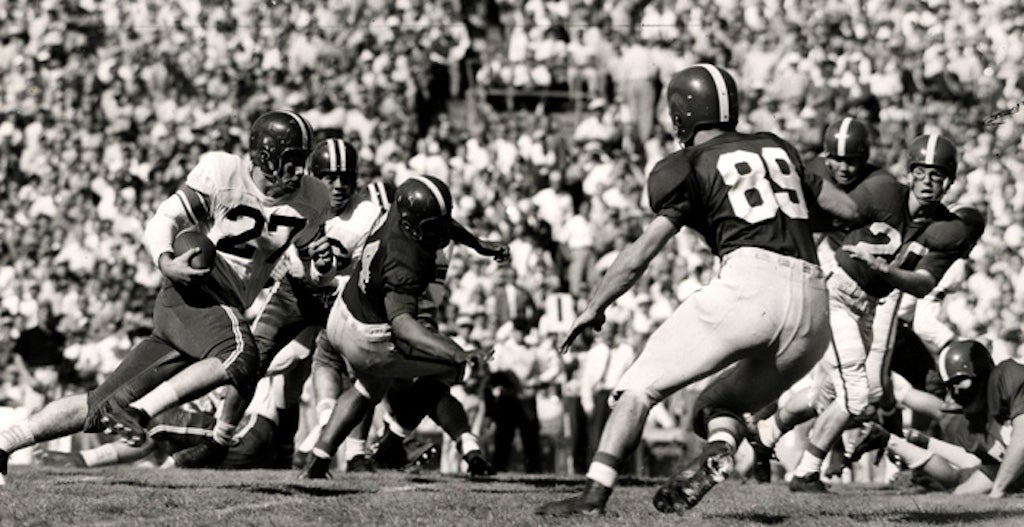 Sports has often served as a microcosm of larger events, such as momentous historical tales. As has often been said by players and coaches, sports can build character and serve as important remembrances later in life, when times get tough.

College football is a master example of such lessons. Rudy Ruettiger’s moment of fame at Notre Dame comes to mind, as the hard-nosed walk-on recorded a sack on his final college series. That lone play sparked a legend, as Ruettiger was seen in delirious celebration; he didn’t so much as make an impression the rest of his career. But that sack of Georgia Tech’s quarterback, at South Bend, has inspired countless underdogs.

Many other such stories exist in the 153-year-history of college football. Perhaps none is more emotional than the situation Jack Van Pool, later a U.S. Army veteran, found himself in at the 1954 Orange Bowl.

A product of Capitol Hill High School in Oklahoma City, Van Pool was actually quite the accomplished player, becoming the only player to that time to make All-State in football, basketball and baseball. In his senior year, his team won the state championship in football with a perfect 12-0 record.

Yet his story is somewhat emblematic of what can happen to a good high school athlete that suddenly finds himself playing for a college juggernaut. In other words, the high school star finds himself a minnow in a swirl of athletic sea monsters.

Arriving as a freshman in 1950 for Bud Wilkinson’s emerging dynasty, Van Pool stood and watched as elite players like Eddie Crowder and Gene Calame contributed to the program’s flash-and-dash, the latter having quarterbacked the Sooners at the beginning of their still-unmatched 47-game winning streak. On the third team, Van Pool probably spent a good deal of time reflecting on life after football.

All that changed when Oklahoma headed to Miami to face no. 1-ranked Maryland in the postseason classic after the conclusion of the 1953 regular season. The Terrapins, coached by former OU boss Jim Tatum, were on top for a reason. Or several reasons, actually. Giving up only three points per game, Maryland intimidated opponents and relied on a terrific offense to wear-down 10 teams. Among the wins were six shutouts!

Oklahoma wasn’t chopped liver, and came in ranked fourth in the country. The Big Seven power was the product of Wilkinson’s cerebral mind and discipline. Calame helmed an effective offense that had found its rhythm down the stretch. Oddly, an injury bug left the team from Norman with a thin quarterback room: second-stringer Pat O’Neal separated his sternum during bowl practices, leaving only Calame with experience.

You know what happened.

Twice in the first quarter, OU stopped Maryland inside the 10, once at the six-inch line. In the second, Calame directed his team steadily downfield, before pitching the ball on the option to halfback Larry Grigg. The result was a 25-yard touchdown run. They would be the only points in the game and gave OU a 7-0 lead.

Calame, however, separated his collarbone just before halftime.

The story goes that as Van Pool entered the huddle, he extended his hands, which were shaking. He said to his teammates, “I know I’m not very good, but if you stick with me, I promise I won’t fumble.”

He didn’t. In fact, the former Capitol Hill Red Wolf steeled himself and directed a flawless attack the rest of the way. With four minutes left, Oklahoma ran out the clock; Van Pool led OU 41 yards to the Maryland 39 as time expired.

“The Sooners claimed a 7-0 upset victory behind a third-string quarterback who had not even lettered the year before and had not made all the road trips during the current season. Injuries had forced Wilkinson to turn to Jack Van Pool, a senior who proceeded to direct the offense without a single mistake.”

Think of it. Van Pool had entered the game, on the biggest of stages in sunny Miami, and immediately faced the granite wall of the Terrapin defense. The adversity there helped him no doubt in later life, as he served 28 years in the U.S. Army, earning a Bronze Star in Vietnam.